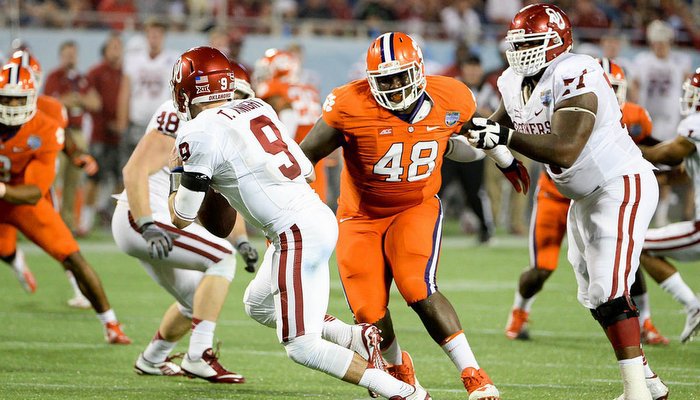 D.J. Reader will be one of the leaders of Clemson's defense this season

If Clemson is going to have the type of season it wants to have in 2015, they will have to hit on the trifecta.

I know, the trifecta is all about horse racing and correctly picking the top three finishers in a race in the correct order, and winners can oftentimes hit money with the right card. For Clemson’s football team, the big money will likely pay off if the Tigers hit on all three of their big football games this season.

Starting 2011, you could look at the Tigers’ schedule prior to the start of the season target three huge games that would have an impact on national perception and rankings and in the ACC. That season, it was Auburn, Florida St. and South Carolina and Clemson went 2-1 against those squads. The hiccups wound up being against Georgia Tech and N.C. State in a late-season slide.

There have been double-digit win seasons and big bowl wins, but how much different would a few of those seasons – from 2012 to 2014 – have been if the Tigers had managed to win two of those three big games? Obviously, there were other losses and big wins along the way and it takes every game to decide a season. One slip up against a lesser-talented team and you’re national championship hopes might be done.

The Tigers once again face a daunting trio this season, but the names have changed in part. Instead of a foe from the SEC to start the season and South Carolina ending the season in the traditional rivalry game, the Tigers have added sort-of-in-the-ACC-in-football Notre Dame and might be seeing a shift in the rivalry against the Gamecocks.

Over the past four seasons, it was Auburn (twice) and Georgia (twice) and then Florida St. and South Carolina as the must-have wins. And I get it, and I will save you the coach-speak and go ahead and write here that every game on the schedule is a must-have win. However, these three are bigger than most and could have an impact on Clemson’s chances at winning the ACC and maybe – just maybe – getting a shot a national playoff spot. And the Tigers have 27 consecutive wins against unranked teams, so let’s concentrate on this season’s big three.

The Irish have the tradition and the national fan base and there is a bit of excitement around the program heading into the season. It will be the first meeting between the two schools since November 17, 1979, when Clemson won 16-10 in South Bend. It will be the first time Notre Dame has come to Clemson since 1977. To me, the biggest question that surrounds the Irish centers on whether they will actually be in the national discussion when they get to Clemson – they open the season against Texas, travel to Virginia, and then host Georgia Tech and UMass before heading to Death Valley. They could be 4-0. They could be 3-1, 2-2 or 1-3. None of those would surprise me, because even though they return 18 starters there are still a lot of questions about this team. For now, though, they are in the big three for me.

The Yellow Jackets won last season, but the Tigers have won three of the last five games. This year’s game is important because losing just one ACC contest in the same conference as Florida St. means another year goes by without a shot at winning the ACC. And let’s face it, there is no love lost between the Tigers and the Jackets. In any sport. It’s contrasting styles and coaching philosophies and recruiting strategies. They don’t like Clemson, and Clemson doesn’t like Georgia Tech. Both teams will be ranked pre-season and the Jackets think they have a shot at getting back to a major bowl game.

The winner of this game has gone on to win the ACC each of the last four seasons. However, it’s been all Seminoles for the last three and the Tigers have lost to the ‘Noles in some kind of excruciating fashion each year. In 2012, the Tigers played awful on special teams and the defense and blew a lead in Tallahassee. The 2013 contest in Clemson was miserable from the beginning – a precocious toddler named Jameis Winston outplayed Clemson’s senior quarterback and it was the Seminoles in a romp. In 2014, Winston was suspended and the Tigers took the ‘Noles to the limit before losing in overtime. In that game, however, the Tigers found a precocious toddler of their own named Deshaun Watson

Deshaun Watson
So. Quarterback
#4 6-2, 205
Gainesville, GA
View Full Profile , and it’s Watson that gives Clemson hope they might hit on the trifecta this season.