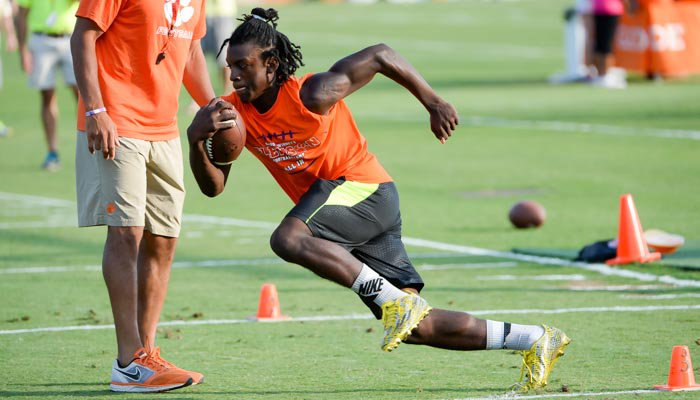 Dabo Swinney
Head Coach
View Full Profile ’s high school camp Monday were nowhere to be seen in the evening session, and TigerNet was on hand for the first three periods of the session.

Let’s jump right in, and we are going to include nuggets from both the afternoon and evening sessions.

View Full Profile didn’t work out in the evening session. Our guess is that the Clemson coaches saw all they needed to see out of Simpson in the early session. Simpson spent time with Clemson’s Durrell Barry, another Fort Dorchester product, and several Clemson players made sure they stopped to talk to Simpson.

*New Orleans (LA) Holy Cross 3-star cornerback Kyle Meyers left after the afternoon session, and a person with Meyers told me earlier he was headed to Florida St. Word out on the field was that a Clemson offer could happen for Meyers sooner rather than later.

*Quarterback Davis Mills was easily the best quarterback we saw during the two sessions. The 2017 pro-style quarterback out of Norcross (GA) Greater Atlanta Christian spent a lot of the session under the watchful eye of quarterbacks coach Brandon Streeter

Mills already has some serious offers - including Arizona St., Louisville, Miami (FL), Missouri, UNC and UCLA. He stood out in his group and made it evident he could make every throw asked.

Coming in second in that group was 2018 Daniel (SC) quarterback Ben Batson, who appeared to have better touch on his throws than 2018 quarterback/athlete Dakereon Joyner. Batson, the son of strength coach Joey Batson, reminds me of a gunslinger. He gets the ball out quick and puts it where he needs to. Batson will be one to watch this season.

Joyner shows good arm strength, but we noted earlier he is hit or miss on a lot of the deeper throws. His athletic ability, however, appears to be off the charts. We are going to keep an eye on a Clemson offer.

View Full Profile showed up for the afternoon session and worked out this evening. Nothing has changed in our evaluation – he’s strong and worthy of the fourth star he recently received. Each time I see him, it looks like his hands have gotten better and Monday evening’s workout confirmed that notion. He also seems like he’s added a few pounds of muscle since we saw him in early May at the Nike Combine in Charlotte.

During one drill, Chalk turned an overthrown pass into a nifty one-handed grab that drew the praise of the coaches.

*Nikki called me over during the evening session to take a look at South Fort Myers (Fla.) 2016 safety Andre Polk. Polk is listed at 6-3, 195 pounds and looks the part. Of course, Clemson already has a rangy safety out of South Fort Myers named Jayron Kearse.

Polk has offers from Louisville, Minnesota and South Florida but he showed some serious footwork during the evening session. Expect that offer list to grow.

Tony Elliott
Co-OC / Running Backs
View Full Profile , former Tiger Roderick McDowell and current running back Zac Brooks during the evening session. Elliott spent time chirping at Felix – which tells me he likes him – and his interest was obvious. Felix has offers from Miami, West Virginia, South Florida and Indiana. As with Polk, that list will grow this summer.

*We stopped to watch Anderson (SC) Hanna 2018 defensive end Stephon Wynn, Jr. and you can put me in the believer category. He has good size and mobility and is another one of the future kids to keep an eye on. However, it was during drills with the defensive tackles that Dan Brooks

Brooks told Huggins to run a particular drill, and Huggins’ blank expression immediately alerted Brooks to the fact that Huggins had no idea what Brooks was talking about. Brooks deadpanned, “Come on Albert. You are going to make me look like a bad coach out here.”

Huggins, like he usually does, responded with a smile.