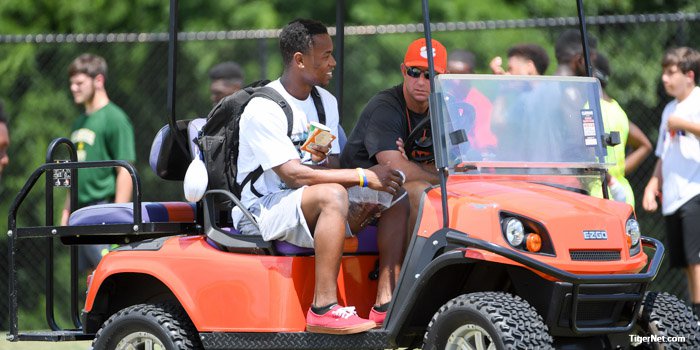 RB Jahmir Smith worked out in the afternoon session

CLEMSON – Temperatures soared into the mid-90’s for the penultimate session of Dabo Swinney’s high school camp, but it was a couple of youngsters who dominated the conversation while a 2018 running back got some one-on-one time with Clemson’s head coach.

Just one more session remains in the camp – a 9 a.m. session on Thursday morning - and the first camp under the new NCAA rules (only college coaches can work the camp) will be in the books. It’s been a relatively quiet camp, but Wednesday’s afternoon session provided a little pop.

I’ll start with 2020 ATH Arik Gilbert out of College Park (GA) Woodward Academy. Gilbert is a 6-foot-5, 230-pound athlete who could project at tight end, defensive end or stand-up linebacker. He spent the afternoon session with tight ends coach Danny Pearman’s group, and his speed and athleticism jumped out, prompting many bystanders to begin the usual whispering of “who’s that?”

Alabama, Florida, Georgia, Georgia Southern, Michigan, North Carolina, N.C. State, South Carolina and Tennessee have already offered Gilbert. Georgia offered first, the offer going out last June at camp in Athens. It will be interesting to see if and when a Clemson offer occurs.

Another walk-up who impressed was 4-star 2018 ATH Richard Jibunor of Athens (GA) Athens Christian School. It took about 30 seconds of watching Jibunor work with defensive coordinator and linebackers coach Brent Venables to realize that this kid is the real deal. He’s raw in some aspects, but he looks like he’s been chiseled out of stone and his athleticism is off the charts. 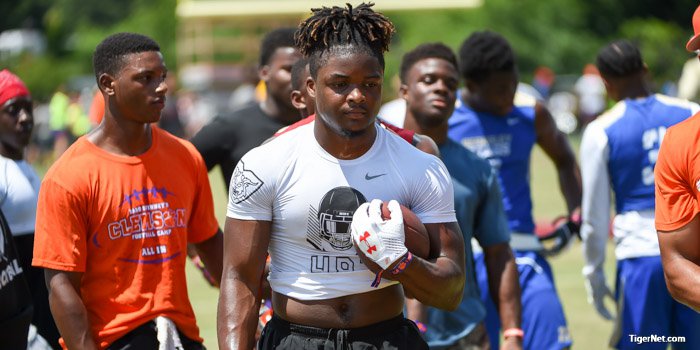 RB Jahmir Smith worked out in the afternoon session"

He’s 6-4, 210, and might project as an outside linebacker or a rush end in the right scheme if he gains weight. During one drill, he came high off the ground to deliver a punishing hit to a tackling ring. It wasn’t form perfect, but the fact that he got so high off the ground drew a reaction from some of those watching.

He has offers from Alabama, Auburn, Florida, Notre Dame, South Carolina, Tennessee, and UNC among others, with Auburn and Tennessee holding the lead. It’s interesting to note that he made it to camp, but as a 2018 kid at a position where Clemson has already recruited well for the next cycle, you wonder if any type of offer will come.

*Another interesting prospect that showed up and worked with running back Tony Elliott’s group was Jahmir Smith. Smith didn’t have Clemson high on his list of schools until he took a visit to the Clemson campus for the spring game. Now, Smith has a lot of interest and has hopes for a Clemson offer. 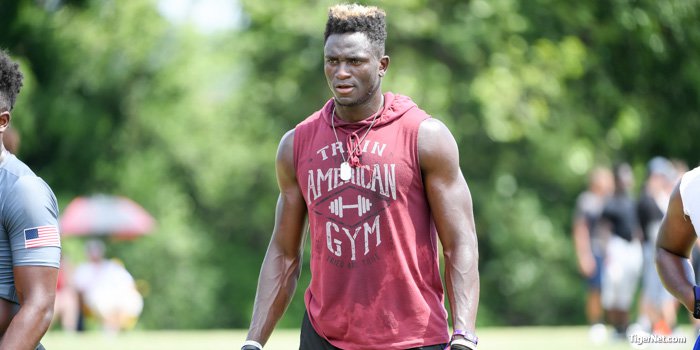 Richard Jibunor was the talk of the afternoon session

The 2018 3-star running back out of Sanford (NC) Lee County is a late bloomer when it comes to attracting big-time offers. Wisconsin accounted for his first power conference offer in late December, and Notre Dame and Tennessee added their names to the list last month to a group that includes North Carolina, Duke, Virginia, N.C. State, Georgia Tech, Vanderbilt, and Nebraska. Four Ivy League schools have offered as well because he’s a dynamo in the classroom.

*Another running back that got special attention Wednesday was 2018 Wake Forest (NC) standout Devon Lawrence, the younger brother of Clemson’s Dexter Lawrence. The younger Lawrence didn’t work out, and instead spent plenty of time on Swinney’s golf cart. The two appeared deep in conversation several times, and you have to wonder what kind of pitch Swinney was making.

*Quindarioius Monday – the 2018 4-star safety out of Atlanta (GA) Carver – worked out in the afternoon session. Monday received a Clemson offer earlier this month and was anxious to get on campus to see what Clemson has to offer.