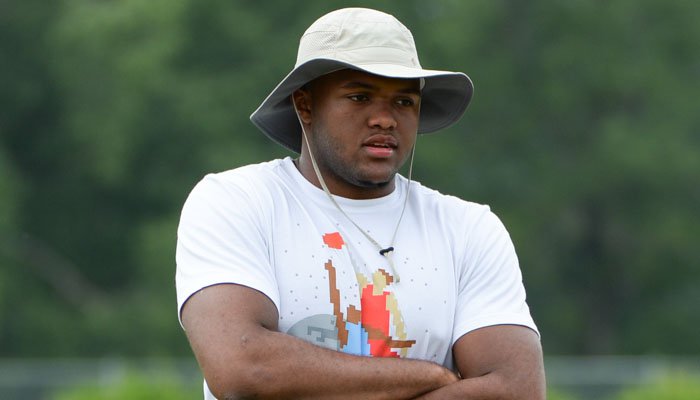 Former Tigers Keith Jennings, Jeff Bak, John Phillips, Tracy Johnson and Rusty Charpia were all at the first session – Charpia coaches at Brookland-Cayce and Phillips, Bak and Johnson all had sons working out with the Clemson coaches.

Add in the fact that several former Clemson players are working as coaches – including Brian Dawkins – and it was almost like a Who’s Who of Clemson football watching the happenings.

Some observations from myself and Nikki Steele:

*Watching the defensive ends, the first person that really jumped out was 2016 weakside defensive end Joshua Brown. The 6-3, 220 pounder out of Charlotte (NC) Mallard Creek had the most explosive first step out of all the campers in his group. Not only was he explosive coming out of the three-point stance, he was also quick maneuvering around the bags. At 220 pounds, Brown looks lanky, but with his body type he can stand to add 20 or 30 pounds to his frame. Brown already holds offers from Florida St., UCLA and South Carolina.

*There’s a third LeMay that is ready to make his way into the college ranks. Benjamin is trying to follow in his older brothers’ - Christian and Uriah who both signed with Georgia – footsteps. The youngest LeMay is a 5-9, 201-pound running back in the 2016 class. He was working out in running backs coach Tony Elliott

Tony Elliott
Assistant Coach / Running Backs
View Full Profile ’s group for much of the first session. He showed a great ability to change direction and wowed the spectators that were standing around with a one-handed, over the shoulder grab that also caught Elliott’s attention and made him comment that LeMay is “too quick to school.” LeMay has good size and speed. His only offer is from Charlotte, but after the camp circuit that will change.

*Watching the offensive linemen, it wasn’t a high school prospect that caught my attention, but it was current Clemson lineman Spencer Region. The junior looks the best that he has looked since he has been on campus. He definitely looks like he has been hitting the weight room hard and taking his conditioning and nutrition seriously. He looks slim and probably weighs somewhere in the neighborhood of 340 after being closer to 360 earlier in the spring. On his big frame, the 340 looks good. 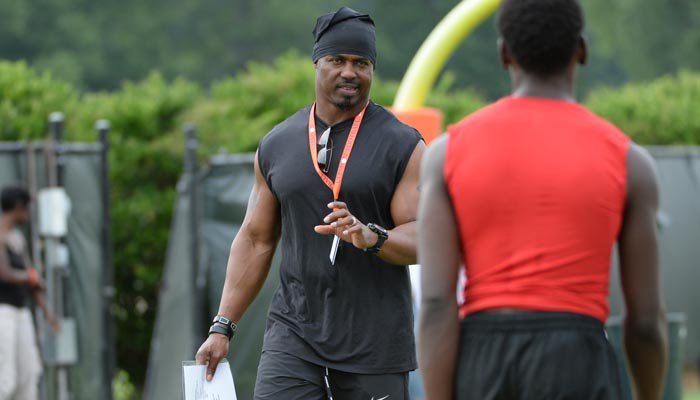 *Clemson 2014 commit Alex Spence was on hand observing the kickers. I spoke to his father for a while before the sessions started, and he said that Spence has been hitting 60-yard field goals in practice and his kickoffs are getting into the end zone. Spence will battle Ammon Lakip in the fall for the chance to replace Chandler Catanzaro.

He said that Alex has video of every NFL kicker on his phone, and that he has videos that are taken from the side, front and back. He also saved on damage inside his home by making a “football” out of white insulation that Alex kicks in the basement every day.

Austin Bryant
Defensive End
6-5, 245
Thomasville, GA
View Full Profile , the 2015 4-star defensive end out of Thomasville (GA) Thomas County Central (the same school as Adam Choice), was on hand but didn’t work out. He will be in town for all three days of camp, but won’t workout. Bryant got the tour, and even spent time talking to Swinney while Swinney watched the defensive backs work out. He also spent time talking to defensive ends coach Marion Hobby

Marion Hobby
Assistant Coach / Defensive Ends
View Full Profile . Bryant is listed at 6-4, 251 pounds and he looks every bit of it and more. He has offers from all of the big schools.

Clemson, Georgia Tech and Duke are listed among his offers. Listed at 5-9, 167 pounds, he has quick feet and good hips, doesn’t lose his balance during the cone drills and looks like a guy that wants to work harder than everybody else. We are gonna get a better look at him this evening.

View Full Profile were on hand for the session. Israel worked out with Chad Morris

View Full Profile out of Woodbridge (VA) C.D. Hylton along with him. They will be here later this evening and will work out in the morning session Saturday.