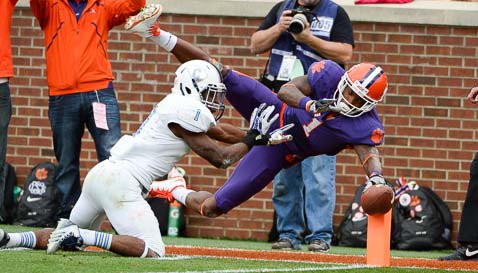 The Steelers think that Bryant will be a red zone target

The Pittsburgh Steelers got the receiver they wanted, and Martavis Bryant

The Steelers, in search of a downfield threat that they hope will take pressure off the running game and quarterback Ben Roethlisberger, selected Bryant in the fourth round of Saturday’s NFL Draft with the 118th pick.

Bryant, 6-4, 200 pounds, caught 42 passes for 828 yards and seven touchdowns in 2013, averaging 19.7 yards per reception. Two of his three catches in the Orange Bowl victory over Ohio State went for touchdowns.

Shortly after he was drafted, Bryant told TigerNet it was a relief to know where he was headed, and then said that the Steelers was a place he really wanted to go.

“It feels good knowing that the process is over and I'm to the point where I can go in and work hard,” Bryant said. “They were one of the teams that were really interested. That was one of the places that I really wanted to go, to be honest with you. I love Big Ben. He knows how to get the ball down field. It's just a great organization and I enjoyed visiting there. I had a great talk with the receivers coach when I was there. It just seemed like the right fit for me.”

The Steelers love what they see in Bryant.

“He is a big old receiver, different from what we have,” said Pittsburgh wide receivers coach Richard Mann. “We are delighted to get him. We think he has great length. He will be a great weapon in the red zone for us. One thing he does very well is track the football. So we feel like we got a guy we can put opposite of Antonio (Brown). I am delighted to get him, and I’m surprised he lasted that long. He is what we have been hunting. He and I just talked, and he is delighted to come.”

Bryant said he was out driving when he received the news.

“They called me. I was actually driving in my car when they called,” he said. “I talked to everyone in the organization. My family just started screaming. My mom is very happy and very proud of me. I just want her to be proud of me. It's a great accomplishment, but we're not done yet. I've still got a lot of work that needs to be done.”