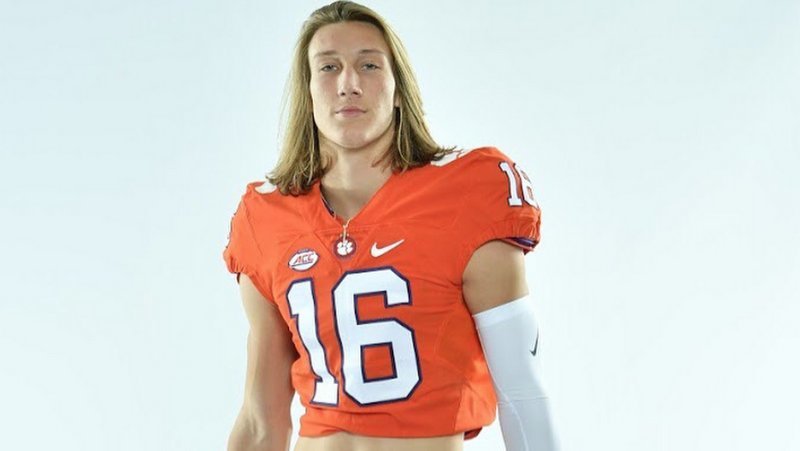 Lawrence will compete for a spot in the spring

There won’t be as many position battles this spring as there have been in the past because Clemson returns 15 starters from the team that made the College Football Playoff last season. One of those returning starters is quarterback Kelly Bryant, who will start and probably end the spring as the number one signal caller.

All eyes, however, will be on the kid with the rocket arm and flowing locks.

Clemson freshman Trevor Lawrence has been compared to NFL quarterbacks, had a plethora of scouts and analysts say he is one of the best high school quarterbacks to come along in the last decade and had Clemson head coach Dabo Swinney say that Lawrence is more physically gifted at this stage of his career than Clemson great Deshaun Watson.

Swinney didn’t back down from his comments on National Signing Day.

“He was the top guy that we identified, the number-one guy in the country," Swinney said. "Been committed since forever ago. He’s here and we can’t wait to get started with him.”

However, the Tigers have veteran Kelly Bryant still on campus and all he did was lead the Tigers to a 12-2 record last season, leading the ACC in completion percentage (65.8 percent) along the way. I asked quarterbacks coach Brandon Streeter earlier this week how the reps would shake out in spring practice, and he said that Bryant, Lawrence, second-year player Hunter Johnson, and redshirt freshman Chase Brice would all get a long look, with Bryant atop the depth chart.

"They’re all going to have a very similar chance. Obviously, Kelly Bryant is going to be the starter heading into spring ball," Streeter said. "He earned it starting from a year ago, he’s obviously going to get the first reps from the first day. But all four of those guys, they’re going to get a lot of reps this spring, there’s no doubt about it.

"I can’t say they’re going to be perfectly equal but it’s going to be close to being equal.”

Bryant threw for 2,802 yards and 13 touchdowns and ran for 665 yards and 11 scores last season. Johnson completed 21-27 passes for 234 yards, two touchdowns and an interception in limited duty and was the top-rated quarterback coming out of high school in 2016.

Add in Brice, who won a state championship in the highest classification in Georgia and you have the makings of a quarterback battle. However, Streeter says the battle will be on the field and that all of the quarterbacks get along.

Kelly is just that type of guy, he wants to get better and he wants to help people. That’s why he’s such a good leader.”

Streeter hasn’t had a chance to work with Lawrence – that will come later this month – but he’s excited about the opportunity to see what the freshman brings to the table.

"He is beaming every time I see him in the hallway or getting something to eat. He’s excited about being here," Streeter said. "There’s no doubt he’s going to make a great adjustment on the field. He’s shown that throughout the recruiting process that you knew he understood the big picture. He has all the tools, has the intangibles and he’s a go-getter. When you have the combination of those things with the talent that he has, he’s got a chance to be very, very special. He’s been working hard, there’s no doubt.

"That’s what Kelly and the other quarterbacks have been doing, they’ve been working with him to help him. It’s not just that it makes Trevor better because it makes Kelly Bryant or Hunter Johnson or Chase Brice better. Trying to explain the offense to him makes them a better player. It works together for everyone.”