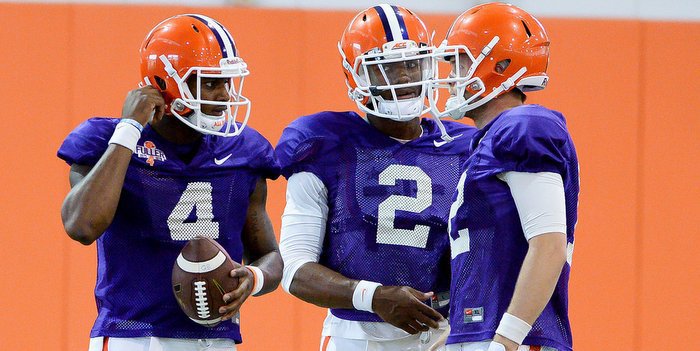 CLEMSON – Brandon Streeter walked on Clemson’s campus in December of 2014 not knowing what to expect from his new quarterback group, a group that entered 2015 long on talent but short on experience.

What a difference a year makes as Clemson’s quarterbacks coach will have Deshaun Watson, Kelly Bryant and Nick Schuessler all return as quarterbacks who saw action last season. Add in redshirt freshman Tucker Israel – who was injured in fall camp – and incoming freshman Zerrick Cooper and Streeter has plenty of choices.

Streeter likes the experience he has heading into the spring.

“That's a great thing to have. Deshaun had some experience from 2014, Nick had minimal experience and Kelly Bryant had no experience. And then being able to cultivate those guys in the 2015 season was tremendous,” Streeter said “Kelly got some reps, Nick got more reps and obviously Deshaun grew as a quarterback. Going into this season it's so much more comforting because you have guys that have been in the system a little bit longer, understand the offense and understand the big picture. But more importantly they understand how I coach and what my expectations are. I am excited about working with these guys and trying to fine-tune some of the details and the little things in their game to perfect their game on the field.”

Streeter said that those two will enter the spring as number two on the depth chart behind Watson.

“They will be. They both did a lot of good things throughout the fall,” he said. “They each had an opportunity to play. Sometimes they did great in games, and sometimes they struggled a little bit. Sometimes you need for that to happen so you can grow from the mistakes. You plug in Kelly in certain situations, and you plug in Nick in certain situations. And it depends on what the game flow is. We will see how they do this spring and see how they come out of this spring to see if there will be any changes.”

As for Watson, Streeter said he will take the time to refine a couple of things in the game of the rising junior.

“We've (Watson and Streeter) got to sit down and talk about goals and talk about things we need to get better at. There are a couple of things that come to mind first,” he said. “Number one, I think his leadership can always get better. He was good, but he’s quiet. He's not a very vocal guy as we know. But players gravitate towards him, and when he speaks, everybody listens. As a leader, you can always grow in category. I challenged him to find ways to pull guys with him because that is so critical for this team and going to win a national championship. He had to do that this year, as well. But he’s got to do it a little different and a little more. He's not a sophomore anymore, he's a junior. Another thing would be his footwork. You can always improve footwork. I think he took a step forward with his footwork from the 2014 to the 2015 season. We always say the quarterback position starts from the ground up. His footwork will help him become more accurate.”