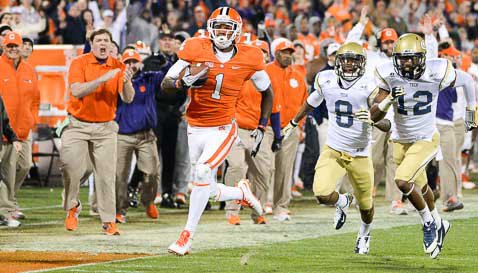 Bryant had five catches for a career-high 176 yards against Georgia Tech.

Clemson’s junior wide receiver was a big part of the Tigers’ thrilling 40-35 win over Ohio St. last Friday in the Orange Bowl - even though he wound up with just three catches for 28 yards, he scored two crucial touchdowns, one of those on a tipped pass that saw him make a one-handed grab.

Bryant’s bowl heroics were a far cry from the Chick-fil-A Bowl the year before, a game he watched from home after a suspension by head coach Dabo Swinney

Dabo Swinney
Head Coach
View Full Profile , a learning lesson that he used as a springboard for the 2013 season.

The night ended with Bryant running up to his mother in the stands, the two exchanging a tearful hug and the knowledge that the game was Bryant’s last in a Clemson uniform – he announced earlier this week that he was foregoing his senior season and would turn professional, a decision he said he made after the game.

Bryant said he was still unsure of his decision heading into the game, but the result left little doubt that he wanted to go out on top.

“It was a whole lot easier decision to make knowing we won and came out victorious,” he said. “I really didn’t go out there and play like it was my last game. I just went out there and wanted to have fun and play relentless and play hard for my team. I came into the game knowing I need to make plays for my team, but I didn’t expect it to be like that. It was great.”

Bryant said that there was one overriding factor in his decision, and that the Clemson coaching staff told him they were behind that decision.

Bryant finished this year with 42 receptions for 846 yards and seven touchdowns. His 19.7 yards per catch ranked ninth in the nation among players with at least 20 receptions. He had his best game of the year in the Thursday night win over Georgia Tech when he had five catches for 176 yards.

Bryant said that playing in the NFL is something he never could have imagined would happen.

“I never had a favorite NFL team growing up, only college,” he said. “I really never thought I would be in the situation I am now. I am just working out and not paying attention to where I might end up. I just know that I have a lot of work to do.”

Bryant said he leaves knowing the Clemson’s group of wide receivers will be good next season.

“They have Charone (Peake) coming back, they have Adam Humphries

Mike Williams
Fr. Wide Receiver
#7 6-5, 205
Vance, SC
View Full Profile ,” he said. “They have a lot of younger guys coming in that can play. But all four of those guys will be big-time players for them next year.”

As for going out on top, Bryant said he wouldn’t have had it any other way, saying, “It’s been a wild ride, but it’s been a good ride.”