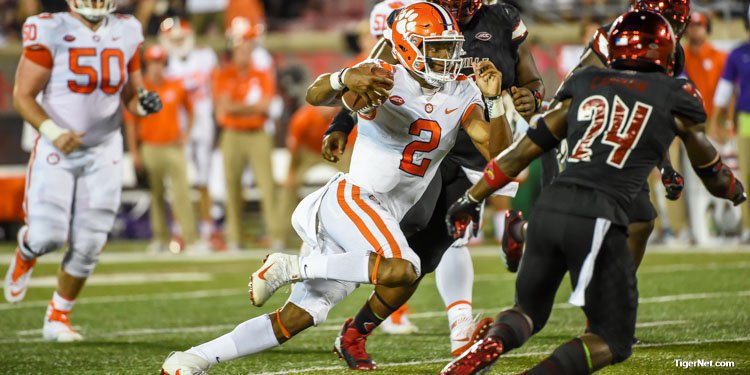 At the end of the San Francisco 49ers’ win over Dan Marino and the Miami Dolphins in Super Bowl XIX, there’s a clip of 49ers center Randy Cross saying, “You came to see an offense, and the wrong one showed up.”

More specifically, many fans tuned in to see a quarterback, and the wrong one showed up.

Sure, Louisville’s Lamar Jackson had his moments and his statistics – he finished with 317 passing yards and three passing touchdowns and 64 rushing yards – but Kelly Bryant was the real star Saturday night. In his first road start, Bryant was poised and made all the right decisions in helping lead Clemson to a dominant 47-21 win.

Bryant was 22-of-32 passing – with several drops – and he had 316 yards. Bryant added 26 yards on the ground, losing some rushing yards with four Louisville sacks, with two rushing touchdowns.

While the stats were nice, Bryant’s composure when there was some adversity was impressive. With the game tied at 7 and the Louisville crowd in the game, Bryant kept his poise and helped lead the Tigers to 26 straight points as they took complete control of the game.

Granted, Bryant has more help, a lot more help, than Jackson. Bryant has a terrific offensive line and a ton of weapons at his disposal and that unit was terrific and dynamic throughout Saturday’s game. Clemson’s offensive game plan was perfect, rolling up 613 yards of offense and showing off a beautiful balance with 297 yards rushing.

Jackson, on the other hand, is as close to a one-man offensive show as there is in college football. And that one-man show is something to behold.

But it’s not good enough to have success against a dominant Clemson defense. Jackson got his stats, although he padded them against the Tigers’ reserves in the fourth quarter. The front-line Clemson defense kept Jackson under wraps for most of the game, except for one drive in the first half when Jackson broke loose and showed off his dynamic talents.

Other than that, Brent Venables’ plan and the talented and deep Clemson defense were just too much for Jackson to get much done against.

And Bryant and the Clemson offense took advantage.

Maybe it’s time to stop questioning Bryant and just appreciate what he brings to this team and the program. Sure, he’s not Deshaun Watson, but this team doesn’t need Bryant to be Watson.

As Bryant likes to say, he just needs to be Kelly B.

And so far this season, that’s pretty good.