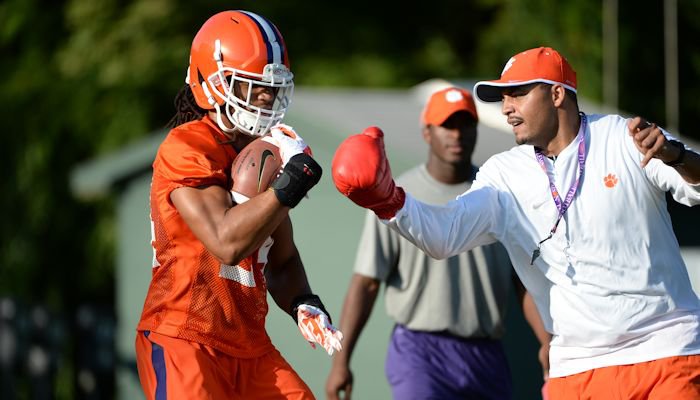 CLEMSON – Here are a few more nuggets we found from Tuesday night’s practice and interview session, and we’ll have a few more stories out of this session during Thursday’s off day.

Dabo Swinney
Head Coach
View Full Profile as very complimentary of the backs during his interview session, saying that this might be the most balanced group Clemson has had during his tenure.

C.J. Davidson
RS Jr. Running Back
#32 5-10, 203
Clemson, SC
View Full Profile came out for interviews, and instead of doing individual sessions, the two sat down on the same bench and conducted a type of pool interview session. As you might expect, there were more than a few laughs.

Davidson stopped his train of thought, and said, “What?”

Brooks laughed and said, “He only asked you about me.”

Davidson smiled and then continued talking about the entire group, saying he wasn’t going to leave out any of his teammates.

Brooks on what is he is working on

Brooks’ thoughts on the running backs

“I told you last year that this would be one of the most dynamic backfields Clemson has ever seen. People will tell you about C.J. Spiller

James Davis
Running Back
# 6-0, 205
Atlanta, GA
View Full Profile , but I am confident when I say that because I know how my group works. Work ethic speaks. We work out together and push each other.”

Davidson on the pride of the backs

“From a pride standpoint, our unit has the pride that we want to be the heartbeat of the offense. We are competing every day and it will make us and the offense better as a whole. “

“This is going to be a special year. Our room is as deep as it’s ever been. Each different guy – whether it’s Leggett or Jay Jay or Stanton or myself – we each bring a certain skill set. It is going to be exciting with so many different formation packages. It’s going to be fun. We have the fast guys like Jay Jay who was taking snaps in the spring game to Jordan with his route running. Who has the edge in what field? It’s a pretty narrow gap.

“Last season we kind we didn’t necessarily have a drop off, but the previous two years we had guys like Dwayne Allen

Cooper on the freshmen tight ends

“Athletic young group. Milan (Richard) can run and Cannon (Smith) is one of those hard-nosed guys you like to see. They are going to be a good bunch.