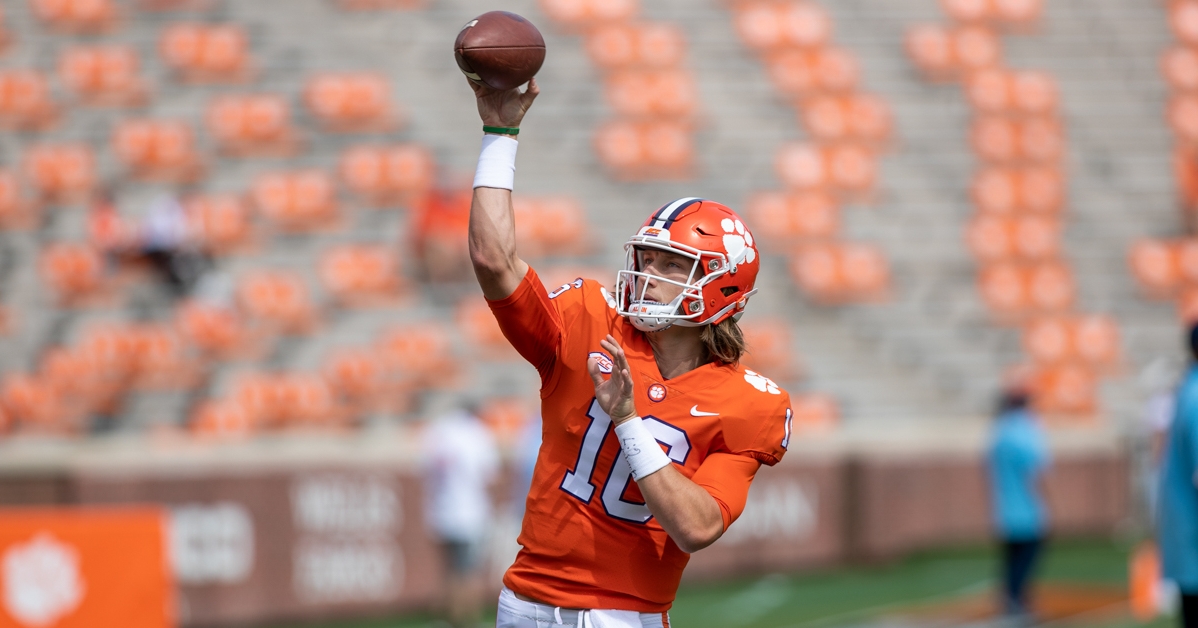 Lawrence is off to a fast start this season.

The Denver Broncos and the New York Jets face off Thursday night in a primetime NFL matchup that might go a long way towards deciding the Trevor Lawrence sweepstakes. Both teams are 0-3, two of a handful of teams that are “battling” for the chance to draft the Clemson quarterback number one overall in next spring’s draft.

Lawrence won’t watch, but he can laugh about the prospects.

Both teams have drafted quarterbacks over the past few seasons – the Broncos have Drew Lock and the Jets have Sam Darnold – but are in need of a lot of help. Another winless team is the Houston Texans, but they have Deshaun Watson at the helm. Watson is good — his coach is not.

The Minnesota Vikings are winless, but quarterback Kirk Cousins has a huge contract. The Atlanta Falcons are winless – in a brutal way – and will clean house sooner rather than later. The Cincinnati Bengals are winless, as are the New York Giants.

Every Sunday, as these teams stumble and bumble their way to another loss, Lawrence’s name trends on Twitter. #TankforTrevor is the hashtag most people use. His Twitter handle is often mentioned as well.

“I try to ignore it as much as possible,” Lawrence said. “Obviously, if you’re on social media at all, you can’t help but see some of it. It’s just funny.”

Lawrence then said while he does find it interesting, he doesn’t pay the hoopla any serious attention.

“It’s a new team every week, so I don’t think there’s any real insight into what’s going to happen,” Lawrence said. “It’s a long season – there have only been three games in the NFL and we’re on our third game. I mean it’s kind of interesting to see all the stuff that comes to me.

“It’s funny. I don’t take it too seriously. You can’t really predict where you’re going to go, what’s going to happen, so all I can do is enjoy my time while I’m here, perform the best I can and enjoy where I’m at right now. We’ll see next year what happens.”

Lawrence is off to a great start in 2020 – he’s played a little more than four quarters and has completed 30-of-37 passes (81.1 percent) for 519 yards and four touchdowns. He’s also rushed for three touchdowns.

The start to 2020 is far different than the one he had in 2019, and he said he worked hard in the offseason to refine his game.

"I've just learned that this game is a lot more mental than physical, and I think that was the biggest learning experience last year," Lawrence said. "Spent this offseason working on just the mental side of the game but also the little things. Like footwork, accuracy, all those things I think have helped me a lot too. Just mentally really knowing what I'm doing and knowing the ins and outs of the game plan.

"Then ultimately just trying to take what the defense gives me instead of making things happen. Just taking what they give me, letting the game progress and eventually the big plays come. I think that's what I've probably done the best job this year of doing, is just taking the easy ones, taking what's there and then just let the big plays happen."

Trevor Lawrence takes you into the keys to his early success. (Video via #Clemson)