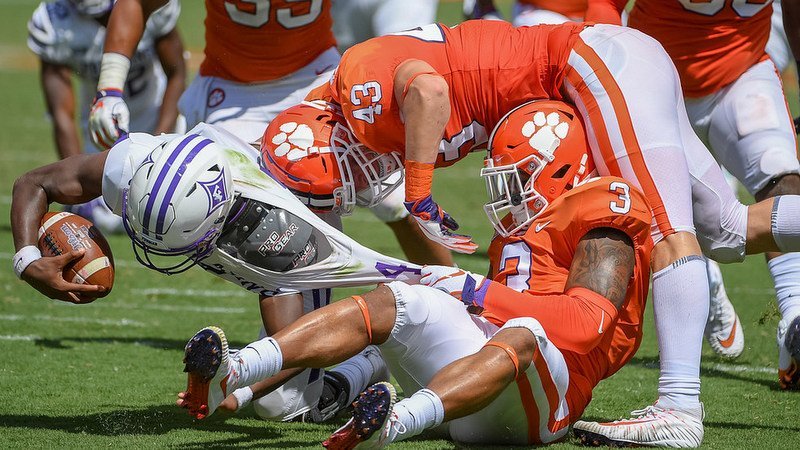 CLEMSON – Brent Venables has coached games at Texas A&M on numerous occasions, and he knows the tough environment of Kyle Field. The Aggies’ home field can be an intimidating place to play for seniors, much less freshmen, but Venables says he will have no problem playing his younger players Saturday night.

Venables was an assistant coach at Kansas St. when he made his first trip to College Station and made several trips as an assistant at Oklahoma, so he understands the challenge of Kyle Field.

“1996 was my first time coaching there with Kansas State. Their fans are engaged from the beginning to the end, a lot of pageantry with their military aspect, their fans do a great job staying on cue and just being a passionate and prideful fan base,” Venables said. Monday. “We have played in a lot of tough environments and this will just be another one. As much as anything you have to be able to focus and keep your poise in those kinds of atmospheres.”

Venables played multiple freshmen on defense Saturday against Furman, including defensive ends Xavier Thomas and KJ Henry, and said he won’t hesitate to use them at A&M.

“If they’re getting on the bus we feel confident enough in them. They’ve gotta earn the right to play snaps. That’s what you always do during the course of the week. But absolutely,” Venables said. “A bunch of guys played and a bunch of guys played well and everything matters. That’s a big part of it, though. Getting in the game and then performing well, as far as building that trust.”

The Clemson defense stifled Furman’s rushing attack for most of Saturday’s game but faces a different animal in a Texas A&M team that rushed for 503 yards in their season opener last Thursday. That includes 240 yards from running back Trayveon Williams.

“Yeah, he’s very explosive, got great balance, good speed, good vision, instincts, can really accelerate,” Venables said. “He can run through trash and get outside and split the defense, so a very, very good player.”

Quarterback Kelln Mond spent time at head coach Dabo Swinney’s high school camp and emerged as one of the nation’s top dual-threat quarterbacks. Mond completed 17 of 25 passes for 184 yards and two touchdowns in the opener and also rushed for a score.

“He’s got good awareness and just very savvy with what he’s doing, doesn’t get rattled and keeps his eyes down the field to make things happen and extend plays,” Venables said. “Those are always the most dangerous kind of quarterbacks.”

Venables is familiar with A&M head coach Jimbo Fisher, and he said Fisher’s schemes have meshed well with the A&M personnel.

“They fit really well. They’ve done an outstanding job recruiting and getting the types of players they want for their system,” Venables said. “There is a misconception that he’s only an I-back guy. He’s going to run I, he’s going to run two type personnel, one back, type two back, line up tight with two backs, and he’s going to line up in spread 60 to 65 percent of the time. That’s who he’s always been (Fisher) and that’s what we’re expecting.”