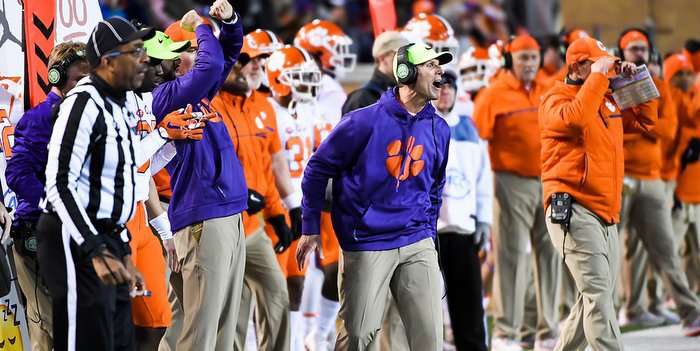 CLEMSON – Finding a way to stop a new offense every week is difficult for Brent Venables, but Clemson’s defensive coordinator could tell right away that the challenge this week is much greater than it was for the Tigers’ season finale.

As Clemson prepares for the ACC Championship Game against Virginia Tech, Venables told the media earlier this week the Hokies are as complete a team as they’ve faced all year.

“My comments to our guys are that we're going to have to play our butts off on defense because I know our offense is going to have to play their butts off on offense,” Venables said on Tuesday. “Nothing is going to come easy. This ain't last week. I think it's important that they recognize that those little details matter - winning the line of scrimmage, being physical, creating turnovers, win third down, all of those things. It matters more now than ever. This is a complete football team we're getting ready to play, a team that will be ready, well-prepared, tough, excited. We'll get their best shot. They're feeling good about themselves and where they're at. It's going to be a great challenge.”

This week the challenge is figuring out the up-tempo, power running game and dangerous wide receivers that Virginia Tech brings to the table.

“They go really fast. Ground and pound mentality with really good skill on the outside to attack you,” Venables. “They're very creative in doing things different ways. They're not just split back, inside zone. They do a lot. They're a little bit like Auburn with a lot more RPOs (run-pass options) and a little bit more diversity, but Auburn is pretty diverse in their package and in their presentation.”

Venables will have to find a way to limit quarterback Jerod Evans in the run game, and he said they hadn't faced a signal caller of Evans’ stature since last year at N.C. State.

“This is a lot of design quarterback run game. Auburn had that when they went to different quarterbacks, but I think in a perfect world they'd like to do it all with one guy,” Venables said. “We know what Sean White can and can't do. This guy is the biggest physical presence that we've seen. They didn't use Jacoby Brissett this way a year ago at N.C. State but that kind of a size and power, tough to bring down. He's got a big arm. It's amazing what they've been able to do in such a short amount of time in their first year offensively.“

Clemson’s secondary will have the challenge of stopping 6-7, 245-pound tight end Bucky Hodges, who does a plethora of things in the Hokies’ offense.

“We look at him as a receiver. He's never in the box,” he said. “He's outside. Other than that, he's a big old wide receiver, very talented, got great ball skills. He can do a lot and cause a lot of mismatch issues. You can't emulate him in practice.”

With all of the challenges in front of Clemson’s defense, there’s one thing Venables knows for sure, when the game is on the line the Tigers won’t be feeling the pressure.

“I think all of it, learning last year how to take care of their bodies. We have a new nutritionist, and a lot of little things have helped enhance things, our strength and conditioning staff and how they manage them, Coach Swinney and what he does from a management standpoint on the field,” he said. “Coach Swinney does a great job of when everybody thinks all of the pressure is there. When South Carolina is hoping that the pressure is going to cave Clemson in, we're laughing and having a good time through the process. There's a delicate balance. Our bye week is different. We have a little more depth. Our leadership is different. Going through the adversity last year has really helped us this year.”