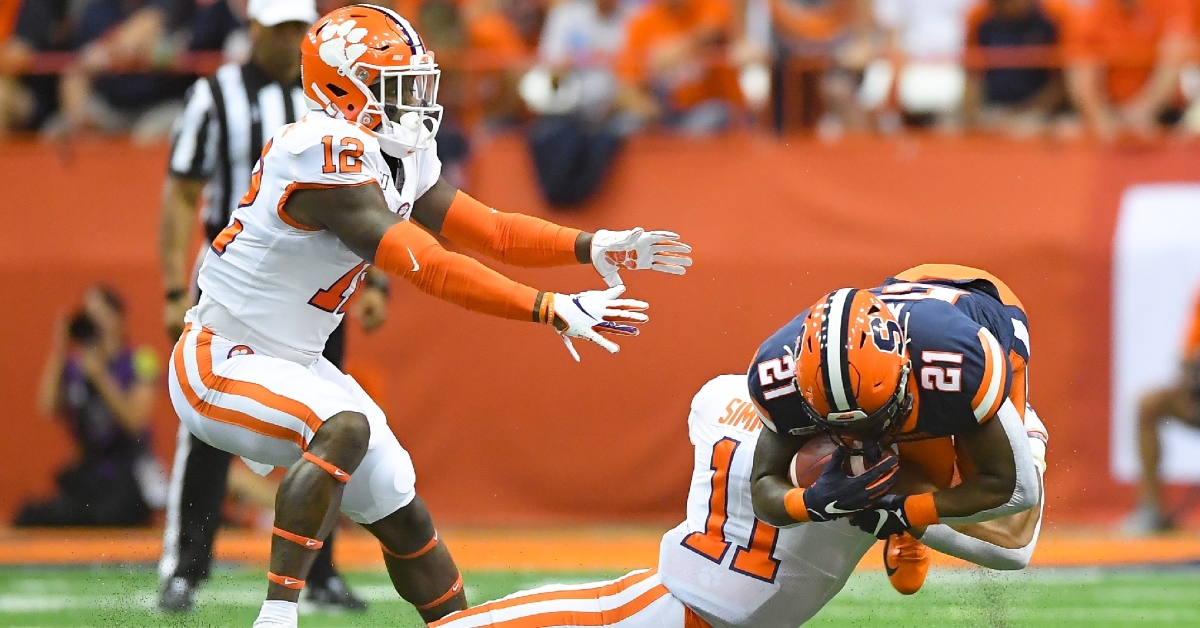 SYRACUSE, NY – Brent Venables was the last one to walk outside the visitor’s locker room at Syracuse for postgame interviews, and he walked out with another big smile on his face. Why? He’s having a lot of fun with the kids.

Clemson’s defense held Syracuse to 187 total yards, a number that includes just 15 rushing yards on 42 carries (thanks to an eight-sack performance). The defense was put into bad situations after turnovers by the offense and came away practically unscathed.

“A lot of fun. That was exhausting. I'm really proud of our guys and our coaches,” Venables said. “Just watching them grow up before our eyes. We left so much on the table but that third quarter and really that second half, what a performance. That's how you learn and grow when you're faced with adversity. Life - as we know - is not about what happens but how you respond. The courage and the toughness and coming on the road with the right kind of mindset, that's what it's all about.”

A Trevor Lawrence interception gave the Orange the ball inside the Clemson five, but the Tigers held on all four downs, including a stop of quarterback Tommy DeVito at the two on fourth down. Syracuse was inside Clemson's 12-yard line four times Saturday night and didn't break the plane of the goal line.

“That four-down series with their heavy personnel, that was a lot of fun,” he said. “It felt like we were working practice. We ran a pop pass, too. That was fun to watch, kind of the fruits of your labor and a microcosm of the week. It seems like about a year's worth of practice, video and meeting from week to week that you put in. To see our guys come out and perform at such a high level and respond numerous times throughout the game. We couldn't ever put them all the way away to where you felt comfortable til later.

“Needing to come out of this with a humble heart and some humility. It's a long season and there's so much fundamentally, understanding the game, understanding what my teammates are doing, why I need to stay on the upfield shoulder, our positioning, angles, just a lot of little things. Not to take away anything from the performance and the effort and the toughness because that far supersedes but we'll get better from this in so many ways and need to keep getting better.”

“It all starts upfront. We lost a lot of players but we’ve still got some guys in here that can play football. As I’ve said, our strength is in numbers upfront right now,” Swinney said. “We play a lot of guys up there and a lot of guys are doing a good job. Logan Rudolph got out there and made a couple of plays and was just relentless. Justin Foster and K.J. Henry were showing up and making plays. All of those guys got in and they’re just going to get better.

“They’re growing and maturing and they’ve accepted the challenge. It’s really being driven by the leadership on the back-seven. Those guys have been phenomenal with providing leadership and discipline. We’re very seldom out of position and that’s a credit to what those guys are doing on the back end. Those guys up front are able to kind of play free and know that they got help in the back end.”

Venables’ group has given up just 16 points in eight quarters against Texas A&M and Syracuse, with the lone touchdown coming with six seconds remaining in the A&M game. That touchdown still rankles Venables.

“Yeah. We shouldn't have let them score last week. That's what I'd say first,” Venables said. “I never really look at that. You want to win. You're prideful. You work hard and you want to play well so you feel good about your contribution. That's really what it's all about. If your players didn't play well then you didn't do a good enough job, period. When they play well, you feel like you didn't let them down and that you're doing your part. It's the consummate team game. This is one of the smartest back-sevens that we've been around. They just understand ball and they don't get rattled. They have a toughness and a work ethic and they take ownership. They're a fun group to coach.”

The fun is in the winning, and Venables is having all kinds of fun.