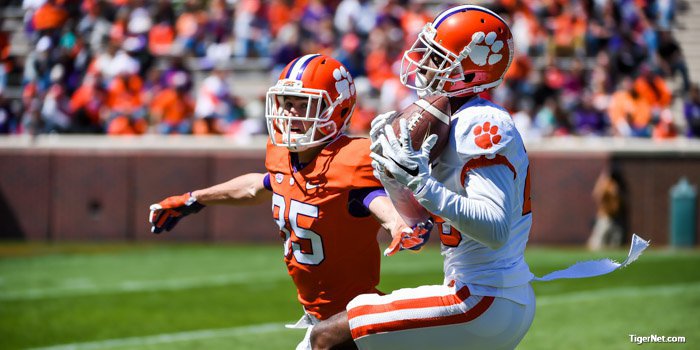 Marcus Edmond had one of the secondary's two interceptions

CLEMSON – To say that Brent Venable was unhappy following Saturday’s spring game would be an understatement.

The Tigers’ defensive coordinator spoke briefly with the media at the conclusion of the Orange’s 17-9 win over the White, and he said Saturday’s performance – and the performance of his group during the spring – was just okay.

“Just okay. I thought overall we played pretty well this spring,” he said. “I didn't think we were great today. I just thought it was okay.”

On whether he can find three defensive ends

“I don't know. We'll see. I need to find two before I find three. I think we've got some good young guys that have a chance. You know who all of the people are. We've got a lot of work to do.”

“I don't really see a separation yet. I wasn't real pleased. I didn't think our positioning was great. I thought we were terribly inconsistent. We've had a better spring than what they did today.”

How much stock do you put in the spring game?

“It's the one I just watched. I put plenty of stock into it. It all counts when you put it together in totality. I know we've got guys who can do it, but they didn't perform well today in front of a good crowd, so it's going to be a pretty rowdy crowd here when we line up next.”

The play of the safeties

Marcus Edmond had one of the secondary's two interceptions"

“I'm not a magician. I can't just 'poof' and have another one show up. Because of our issues numbers wise at corner Ryan Carter was a guy we had working there. Whether or not he has a chance to go back doesn't look great. All of those young guys we recruited and signed have to come in and be ready to contribute.”

“I don't know what the schedule is and it really doesn't matter because I can't work with him. He'll be there in fall camp unless he has a setback. He'll provide depth at nickel. That's where he started before he got hurt.”

“He'll be ready to play both. I think he does well at both. He had to learn everything that d-end does - where to put your eyes, know your assignments and how it affects the d-end. There's a lot to learn, but he's done a really good job.”

“I saw Clelin get better this spring. I saw him make a lot of improvement. He's certainly not polished yet, but I didn't notice a whole bunch today that was bad.”