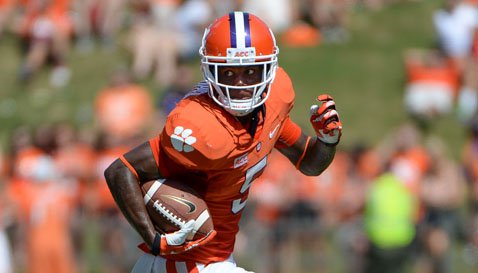 Overall the Tigers will face nine teams that had winning records and eight squads that played in bowl games during the 2013 season. Five of those programs, Louisville, South Carolina, Florida State, Syracuse and North Carolina, won bowl games. The slate also includes three teams that won at least 11 games and finished in the top 15 of both polls, Florida State, Louisville and South Carolina.

Let’s take a look at the schedule:

These two teams will once again have all summer for the hype to build. However, both teams will have new quarterbacks and a lot to prove. The winner gets an early-season boost in the rankings, while the loser has to build momentum. Clemson defeated a fifth-ranked Georgia team at Clemson last year in one of the top college games of the year, 38-35. Clemson has lost three in a row in Athens and has not won in Sanford Stadium since David Treadwell’s 46-yard field goal on the last play of the game gave Danny Ford

It will be the second consecutive year the Bulldogs have played at Clemson. Last year South Carolina State finished with a 9-4 record and reached the FCS playoffs. Clemson won 52-13 last season.

The Seminoles had two weeks to prepare for Clemson last season, and trounced the Tigers on national television. This year, both teams get two weeks to prepare for the game in Tallahassee. It will be the earliest meeting on the calendar between the two schools in Tallahassee since 2006 when the Tigers last won there, a 27-20 victory on a last minute touchdown by James Davis

James Davis
Running Back
# 6-0, 205
Atlanta, GA
View Full Profile .The winner of the Clemson vs. Florida State game has gone on to win the ACC Atlantic Division each of the last five years.

Larry Fedora’s squad will be one of the favorites to win the ACC Coastal next season. This is the first of three straight ACC games in Memorial Stadium, the first time that has happened since 1991. Clemson has won four of the last five against the Tar Heels, including three in a row at Death Valley.

Clemson plays part two of its Tobacco Road series against Dave Doeren’s Wolfpack, who struggled last season. Clemson has won nine of the last 10 in the series, with the Wolfpack including five in a row at home, not losing since losing to a Philip Rivers-led squad in 2002. The last time the Pack played in Death Valley, Clemson won in a shootout, 62-48.

The Cards make their first trip to Clemson as part of the new ACC, and they bring with them one of the more scrutinized coaches in the country – Bobby Petrino. Charlie Strong left for Texas, and Petrino takes over for the second time at Louisville. Marshall (1999) and Miami (FL) (2005) are the only programs to win their first game in Clemson Memorial Stadium since 1977.

The Eagles improved dramatically under first-year head coach Steve Addazio last season. This will be the first road game for the Tigers in 28 days. The Tigers have a 5-4 lead in the series since the Eagles joined the conference for the 2005 season.

Dabo Swinney
Head Coach
View Full Profile last season in the middle of Clemson’s blowout win? The Orange will be better, but how will they handle playing in Death Valley for the first time?

It will be strange to see a Wake Forest team without Jim Grobe on the sideline. The Tigers will face a Demon Deacons team led by first-year coach Dave Clawson, the only first-year coach Clemson will face this year. This game will mark the third time since 2008 that Clemson has played in Winston-Salem on a Thursday night.

The Tigers will have nine days to prepare for Tech’s option offense, and this will be the first meeting between the two teams in Atlanta since the 2011 season. The Tigers have beaten the Yellow Jackets each of the last two years, but have not won at Tech since 2003.

Turnovers killed the Tigers in Columbia last season, and South Carolina has won five in a row in the series.