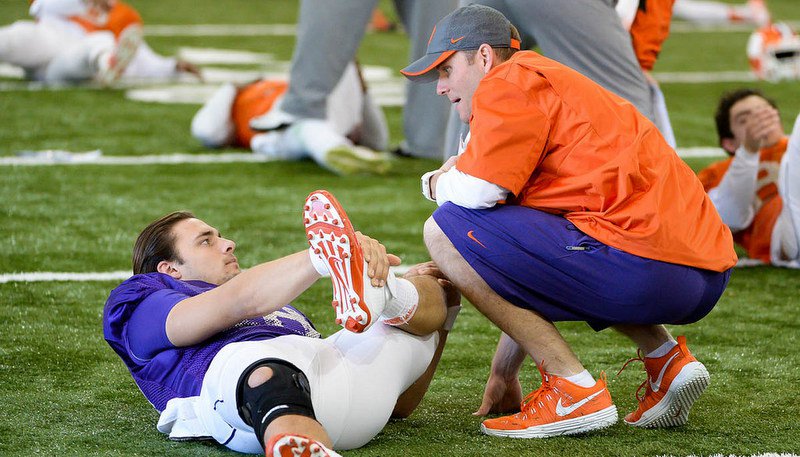 CLEMSON – Brandon Streeter didn’t receive any preferential treatment during Saturday’s bowl practice session. Quite the opposite in fact.

Following one of the horns that signaled the start of another period, Streeter and the quarterbacks left their nets and pads on a part of the practice field that was to next be used by secondary coach Mike Reed

“The new guy left his equipment!! Look at the new guy,” Reed shouted for all to hear. “Gosh, the newbie didn’t even move his stuff off the field.”

The former Clemson quarterback (1996-99) and graduate assistant (2004-05) returned to familiar surroundings this week after nine years as a quarterback coach/offensive coordinator for Liberty then Richmond at the FCS level.

Chad Morris
Offensive Coordinator / QBs
View Full Profile left for SMU a few weeks ago, Swinney had Streeter on speed dial to see if he would be interested in returning home.

“To bring Brandon Streeter home is a great addition to our staff,” Swinney said. “Obviously he knows Clemson. We’ve got two freshman quarterbacks showing up in January and a young guy in Deshaun Watson

Deshaun Watson
Fr. Quarterback
#4 6-3, 204
Gainesville, GA
View Full Profile . I really wanted an expert quarterback teacher. Brandon has tremendous experience in grooming and developing and teaching quarterbacks. I’ve kept my eye on Brandon ever since he left here and knew I was going to hire him, it was a matter of when it worked out.”

Streeter said the time away from Clemson allowed him to grow as a coach and a person.

“I truly believe that it was great for me to be away from here and to learn and to grow professionally and personally,” Streeter said. “At the same time staying in touch with Coach Swinney and the Clemson nation and being still involved with them personally was obviously important. Having this opportunity is special.”

Streeter gets the chance to work with talented freshman quarterback Deshaun Watson. Watson had surgery Friday to repair his torn ACL, and Streeter – who was known for his toughness - said he feels like he will be able to relate to Watson.

“(My career) was a roller coaster in a lot of ways,” Streeter said. “Deshaun and I had this discussion (Thursday). I’m going to be able to relate to him in a lot of ways because of that. I was able to take it one day at a time and focus on getting better and mentally able to stay positive and knowing I could only control so much. I do believe it’s mentally how you approach it. It’s such a critical part of it.”

He then laughed and said he has one major goal when it comes to Watson.

"I just don't want to screw him up," Streeter said. "That's the big thing."

His first test, however, will be helping senior Cole Stoudt

“It’s an opportunity to have a clean slate and start over and go out there in an attack-mode mentality and regain that confidence,” Streeter said. “I know going into the season – Cole has a ton of talent, I’ve heard that from so many people. It’s a matter of getting that confidence back. I know he will and it’s going to start (right away) with how I coach it. It’s a new opportunity and that’s the biggest thing with that.”

The best part of his new challenge is that he gets to do it in Clemson.

"My family and I are beyond excited to return to Clemson, my alma mater, a place that has always been special to me," Streeter said. "This is truly a dream of mine, to give back to the university that has given me so much."