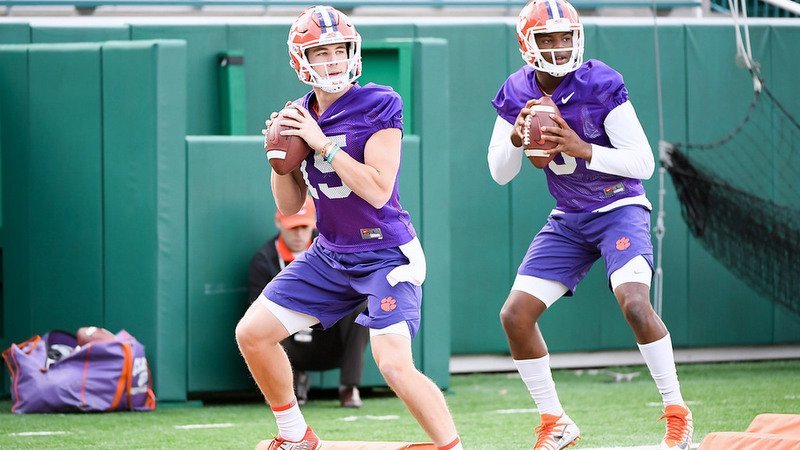 Saying that Clemson is loaded at quarterback is like saying a United States Navy aircraft carrier packs a little firepower. It’s an understatement and doesn’t tell the entire story.

Veteran Kelly Bryant, who led Clemson to a 12-2 record, an ACC Championship and a berth in the College Football Playoff, returns for his senior season. Two talented youngsters in Zerrick Cooper and Hunter Johnson, earned valuable experience last season. Talented freshman Chase Brice is waiting in the wings and veteran Tucker Israel knows the playbook better than anybody.

As if that isn’t enough, the nation’s top-rated quarterback recruit in Trevor Lawrence settled into his new room on Clemson’s campus Sunday. Lawrence brings a winning attitude and a bevy of expectations with him.

So which player will play when the season rolls around next September? The best player, according to quarterbacks coach Brandon Streeter. Whoever starts has to earn that right.

“I think it's very important - and we've done this for every kid that we've recruited - that they understand that they have to earn it. Trevor understands that. He has to earn it,” Streeter told TigerNet last week. “At the same time, the best guy is going to play. It doesn't matter if you're a true freshman or a redshirt senior or a walk-on. It doesn't matter. The best guy is going to play because we'd be not very smart coaches if we didn't play the best guys. They have to earn that and if they earn it then that's who is going to play.”

Streeter said that all of the quarterbacks understand the process and what’s at stake. He says the coaching staff has made it clear – they aren’t playing games and want the best man to earn the job.

“They all understand that and it's so clear,” he said. “That's one thing I try to do in my room - and all of the coaches do - is I want to be very clear with my communication and I want to be very clear on where they stand as a quarterback, what they need to do to get better, what they're doing very well. Then, I make sure it's communicated to their families as well so that we're all on the same page. We're going to play the best guy. Everybody has to earn it. Everybody is going to get an opportunity to earn it, too.”

Spring practice is still seven weeks away, but it’s not too early to start looking at what figures to be a spirited competition. However, Streeter says that the spring will be used to get the younger players reps – the coaches know what the veterans can do and now it’s time to see what the others bring to the table.

“Then, when it comes to spring, I haven't thought about the specifics of reps and things like that, but they're all going to have an opportunity, so that means that one guy is not going to have a ton of reps,” Streeter said. “I think it's important that you allow some of the younger guys to get a little bit more reps because they haven't had the opportunity to show what they have, like Kelly and Zerrick and even Hunter. They've all gotten most of the reps this fall. I think the other guys like Trevor and Tucker and Chase Brice, that haven't had many reps get an opportunity. I'm not saying that it's going to be big time lopsided but they're going to have an opportunity to show us what they have.”