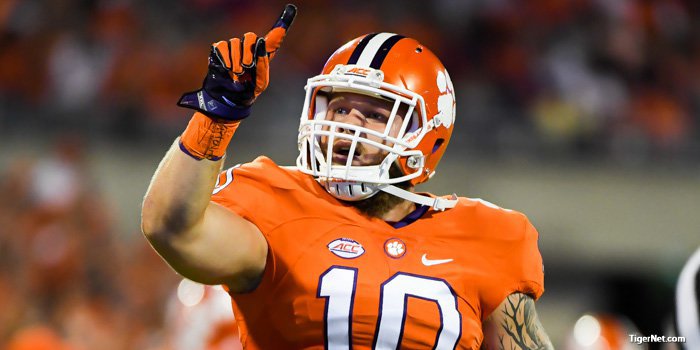 Boulware came under national scrutiny Friday night when his hit on Boston College quarterback Patrick Towles initially drew a flag for targeting. Towles tried to evade Boulware on a scramble, and Boulware’s hit appeared to be high, drawing an immediate flag. It was the second time in two weeks Boulware’s play on the field was called into question – against Louisville he grabbed quarterback Lamar Jackson by the neck in making the tackle.

On the Towles’ hit, Boulware was shocked a flag was thrown.

“I was kind of confused because it wasn't close. I think the referee saw me hit him pretty good and he just assumed,” Boulware said Monday in the WestZone. “I think a lot of these referees are a little trigger happy. They see a big hit and a lot of them just assume it's going to be targeting. I was confused because I knew my head didn't even touch him. I knew I literally just kind of bench pressed him off of me. I was confused as to why he threw the flag because I knew it wasn't close at all and I was kind of annoyed that it was so quick. I saw a bunch of other targeting penalties - one in the Georgia game that was actually targeting.

“I think a lot of times the referees are quick to throw a flag because they see a big hit. That's their job, and I understand why - they're trying to limit those big hits and the head-to-head plays. I know it's difficult because it's so quick. He sees a big play, and he's got to react one way of another, so I understand why he threw the flag, but for me, I knew it wasn't targeting at all, so I was just kind of confused. They wouldn't show a replay at all during the game so I only had an idea what it looked like, and I didn't know what the officials were seeing up top.”Boulware annoyed by "dirty" label but vows not to change

Boulware said there was no animosity during the Boston College game – one Eagle player said he looked like a homeless person. He even made a friendly wager with one Eagle on whether Towles crossed the goal line on a first-half goal-line stand by the Tigers.

Boulware says he just plays hard and plays the game the right way.

“It's difficult. People don't realize that I play linebacker in college football at the highest level. They try to make the game so soft, and that's not how I was brought up,” Boulware said. “I don't play the game that way. I never have and I never will. If I have to bench press a guy off of me to get him down or shove him or tackle a guy by his head or neck like in Louisville to get him down, I'm going to do it. I'm going to try to get the guy down by any means necessary. I think if people think that it's cheap or I'm a dirty player because of it then it is what it is.”

He then said he isn’t the dirty player people think he is, and pointed to his choke of Jackson as a play where people only see what they want to see.

“You can watch my 2,000 snaps that I've played in my career, you're not going to find three dirty plays out of 2,000 snaps,” he said. “People are saying that I'm like the most hated college football player and I'm dirty. If you don't look at that play - I wasn't choking him (Jackson). I was just trying to get him down. You can't find two or three dirty snaps in my entire career. People saying that are just jumping to conclusions. I'm an aggressive player and I'm an intense player, and I'm going to do anything to get the opposing player down.”

The hit on Towles is another instance where people wrongly jumped to conclusions like they did with Jackson.

“I was about to get juked out, and I was kind of off balance, so I threw a shove at him and not expecting him to go down like he did. I don't think he expected me to hit him or clip him like I did,” Boulware said. “People just jump to conclusions. I saw that they were saying that was a dirty play. I'm just like, 'How? How in the world? I'm literally just shoving a guy to get him down, so how does that make me a dirty player?' Me trying to tackle Lamar Jackson - I tackled him by his neck. I'm not going to be like, 'Oh no, I tackled him by his neck, let me let him go because I might hurt him a little bit.' We're playing football. We're not playing golf or tennis. This is an aggressive sport. You can see that I'm annoyed by it because it's been blowing up the past two weeks.

“If you watch every single snap that I've ever played, you're not going to find one dirty play. They don't show the snaps where I'm helping quarterbacks up, or I'm patting the quarterback on the head on the first play of the third quarter, or I'm talking to the tight ends having a good time. They only want to replay when I shoved him, or they want to replay the Lamar play 400 times. They don't show the other snaps. I don't know if I answered your question and I don't even know what you asked, honestly, but I've been wanting to talk about it because people want to label me as a dirty player when they can't find any snaps in my 2,000 snaps in my life that I've been dirty. It's been annoying. I play the game in an intense way. It's an intense game. I play the game how it's supposed to be played. I think people are trying to make the game soft and something it's not, and I'm not going to do that. I'm going to play it how I've grown up playing it, and I'm not changing for anybody.”

Following the hit and flag on Towles, the television cameras showed defense coordinator Brent Venables acting upset and throwing more than a few choice words Boulware’s way. Boulware pointed to that as another instance where people didn’t understand the situation.

“I watched the TV copy two days ago, and they zoomed in on him chewing me out. He was getting mad because in the huddle - BC has super cool guys and we were talking the whole game, and it was a fun game because we were having conversations throughout the whole game,” Boulware said. “Me and their tight end and running back and quarterback were having conversations throughout the whole game. After I hit him, we're in the huddle waiting for the flag, the quarterback tried to come to our huddle just to talk and laughing about the play, and I try to talk to him, and Coach Venables is intense, and he got mad I was trying to talk to their player, which I understand.

“It was the heat of the moment, and I probably should've just stayed in the huddle, but we were just trying to talk and laugh about the play because we were talking the whole game. That's why he was chewing me out on the sideline, and I was looking like I was dumbfounded. I was like, 'Coach, we were just talking,' and he was like, 'I don't care, that's the opponent. You don't talk to the opponent.' I understand. In the middle of the game, just do your job, and after the game, you can talk to them. I was just trying to have a conversation, and he chewed me out for it. That's Coach V, and you live, and you learn.”

The proliferation of targeting penalties makes it harder to tackle and make aggressive plays because of the ever-present threat of ejection, and Boulware says he's had to re-learn how to tackle.

"A little bit because we've changed the way we practice and how we learn to tackle, so you really think about it in practice, so it's second nature. You don't really think about it. I grew up leading with my head" he said. "That's just how they taught it in football growing up, but since I've been here, you lead with your body and keep your head up and use your upper body to absorb the tackle. You think about it in practice, so it's second nature in the game. Some plays, it's inevitable. When I got ejected my sophomore year against Georgia Tech, the running back was super low to the ground, but he was still running, so I couldn't not hit him with my head because he was a foot off the ground. I just dove at him, and I had to lead with my head because he was so low. Some plays you are very careful not to lead with your head, but they've changed the way they teach you to tackle, so it's a lot easier to think about it. It's common knowledge now how to tackle."