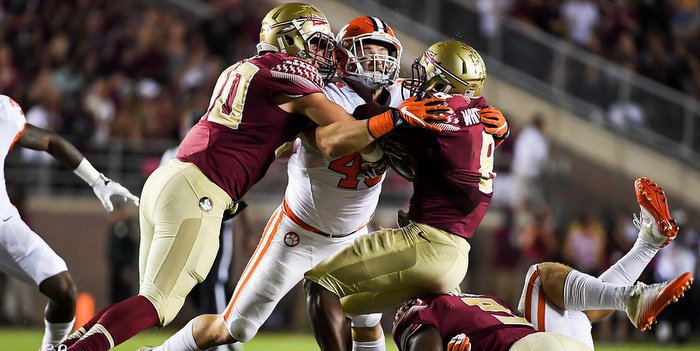 Those are all characteristics that describe most college football players, but more importantly they describe every single member of Clemson’s kickoff coverage team.

The redshirt freshman linebacker redshirted last season after enrolling in January of 2015 and he made it his mission to see the field in 2016 and contribute in any way possible.

Smith met with media Monday for the first time as a Tiger, his session coming on the heels of being selected as the special teams player of the week for Florida State, and he said it takes a special kind of mindset to play special teams – especially the coverage units.

“Coach Swinney preaches that a lot of it is want to, especially on things like kickoff. A lot of it is just desire to just go down there and try and make an impact and try to make a big hit or take on the wedge team or beat your mine,” Smith said earlier this week. “A lot of his pride. I was really eager to get on the field this year anyway I could. I made it a focal point to definitely be on that kick off team, so a lot of it is drive, but obviously you also have to have speed, a certain aggressive physicality to you. You have to have a mindset that you're going to blow up something. That's what a lot of the guys on the team have. I'm just glad I was able to have that job and I'm looking forward to being on that team next year and hopefully years to come.

“It's definitely a sacrifice. Going on special teams, you're running full speed for 50 yards and those guys are big guys out there. It's a lot of selflessness to go down there and give up your body for the team - whether it's taking on that wedge or a double team. Those guys don't get a lot of credit but the guys who take on that double team, it's tough. That's a selfless job and you have to go up and absorb those hits. There are a lot of collisions out there but it's football and it's part of the game.” 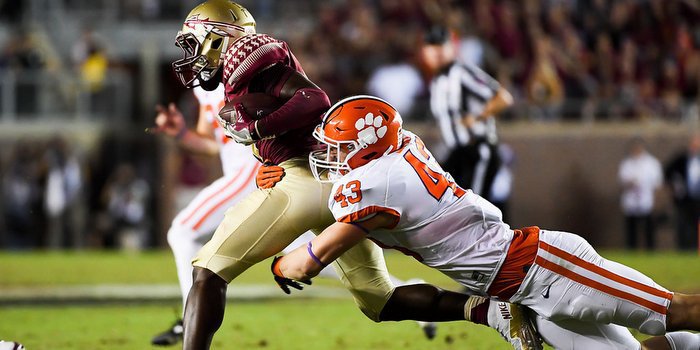 With the coverage units being among the worst in the nation in 2015 and costing the Tigers a chance at a national championship, Swinney was looking for players with the make up to dominate in their role and Smith jumped at the opportunity.

“Without a doubt. Last year we were a bottom feeder on kickoff, especially - one of the worst,” Smith said. “This year, Coach Swinney has made an emphasis in the offseason to really, really improve on special teams, especially that kickoff unit. We rose to the occasion. We've taken a lot of pride in special teams and it has shown this season. We've put in a lot of work and we've got a lot of guys on that team that take pride in their job and going down there to make an impact and set up the defense with good field position, and that's a lot of special teams right there. Special teams is a battle of field position and we take pride in that.”

While he wouldn’t go as far as saying that he’s a leader on the coverage units, he did say he takes pride in making an impact whenever his number is called.

“I wouldn't necessarily say leader, but I would say I'm somebody who's trying to make an impact on special teams,” he said. “I would say on that kickoff unit, especially, we look up to guys like Dorian O'Daniel who has been there and done that on a lot of special teams and has been a core leader. We follow guys like Cordrea Tankersley. Those guys have stepped up a lot on all of the special team units. I'm just trying to make an impact. I understand that this year that's probably where my role is going to be most used at and maybe certain packages on defense, but this year throughout the season it's been a lot of special teams. I've just tried to do my best to make an impact.”

Being able to make an impact on special teams has helped ease the transition from high school football to college football, but Smith said he’s also had some really good teachers along the way.

“It has certainly been a process ever since I got here in January of 2015,” he said. “It's been a little bit to get adjusted to, but the guys around me like Ben Boulware, Kendall Joseph are helping me to ease into that process, especially last year since I redshirted, I was able to take time to get bigger and stronger, spend more time in the playbook trying to get adjusted to being a college linebacker. It's been good. This year has been a lot different especially since I've been playing. I'm just trying to fit into my role and that role is special teams. Wherever they need me, I'm there.”

It was Boulware’s advice, however, that’s stuck with Smith the most.

“He (Boulware) told me his freshman year he played a lot of special teams and he told me to keep it up because Coach Venables pays close attention to that so he'll be looking at that,” Smith said. “He told me that it will help me a lot into next year and getting on the field on defense.”

The opportunity to contribute now and looking ahead at what’s to come is what drives Smith and getting his first player of the week honor was something he’s always dreamed of.

“It was pretty cool, especially for FSU and at FSU,” he said. “That's like a dream come true for me. I'm living the dream. I couldn't even imagine that environment. Going down there on kickoff was just crazy. Being able to make some plays was awesome.”