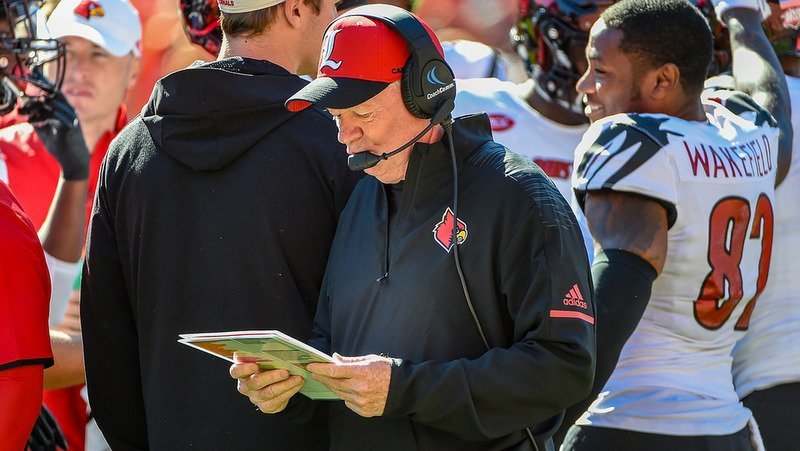 Bobby Petrino says his team got beat up by the Tigers

CLEMSON – Wake Forest head coach Dave Clawson told the media that he felt like members of his team quit after a 63-3 loss to Clemson a few weeks ago, and FSU head coach Willie Taggart chastised certain players on his team for quitting in a 59-10 loss to Clemson last week.

Louisville head coach Bobby Petrino doesn’t feel like his team quit in a 77-16 loss to No. 2 Clemson Saturday – they simply got beat up. Petrino also said he feels like his team was never really in the game.

“That’s a good football team...there is no question about that. I’m not too happy with the way we played, particularly on defense, but you have to take your hat off to Clemson,” Petrino said. “They’re the No. 2 team in the nation for a reason. Offensively, I thought we had a good drive there in the first quarter, but we stuttered and didn’t get the points. That drive was what we were trying to do, which was to utilize the clock, run the ball and keep them on the sideline. I felt like our guys kept playing and were excited to make plays, but it was a tough game. They were a really good football team, and they beat up on us today.”

Petrino was asked if the lack of a touchdown on the Cardinals’ 16-play drive in the first quarter changed the momentum of the game, and he said no.

The Tigers rolled up 661 yards of offense. Clemson also rushed for 492 yards, its most under Dabo Swinney and the fourth-most in team history.

“I was really concerned coming into the game about their running backs because of their speed and explosiveness,” Petrino said. “They’ve made those big runs against everybody, and we weren’t able to shut them down at all. We couldn’t tackle them the way that we needed to tackle them. They were more physical runners than we were tacklers.

“The guys prepared and practiced hard this week, and they were excited to come to this type of atmosphere. It’s an unbelievable atmosphere, but it’s hard to get beat like that. You are never happy with effort when you get beat like that, but I didn't feel like anyone gave up or anybody quit out there. I felt like they kept competing.”

Louisville wide receiver Jaylen Smith said Clemson had too much talent and too much of a home-field advantage.

“I would say it is very difficult. Nobody likes to lose, especially not in that fashion,” Smith said. “This crowd - I have been here at 5-0 and I've been here at 2-6. The crowd remains the same and it remains electric all throughout the game and tends to hinder some of the performances on both sides of the ball. A lot of people aren't used to seeing that big of a crowd. And the stage that Clemson has - potentially like seven first rounders on their team, six on defense.”