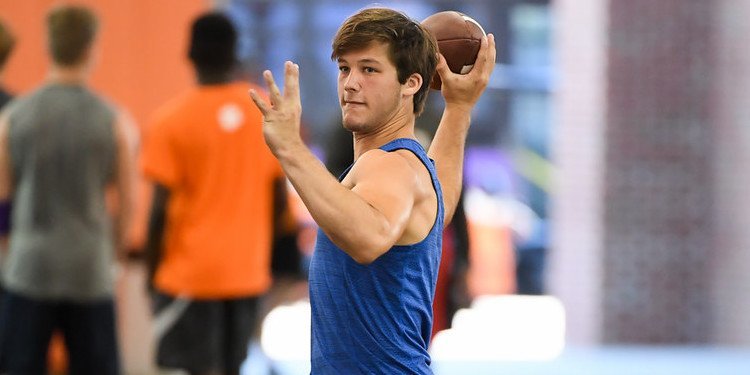 Tyler Venables is a blue-collar player, much in the mold of his dad, Clemson defensive coordinator Brent Venables. He didn’t need a lot of hype of buildup or a splashy commitment video. All he needed was a little push from head coach Dabo Swinney.

Venables is a 3-star 2020 safety prospect out of Central (SC) Daniel who committed to the Tigers late Saturday at Swinney’s youth football camp.

Venables, the son of Brent and brother of Clemson linebacker Jake, is rated as a 3-star by the 247Sports Composite rankings. He also held offers from Wake Forest, Coastal Carolina, Nevada, and Jacksonville State.

He went to camp Saturday not knowing how it would all unfold.

“I committed last night at around 11 o'clock. We are at the youth camp right now, and we were in Death Valley last night,” Venables said. “I saw Coach Swinney, and he pulled me aside, and he was like, 'When are you going to commit?' And I was like you know what, I will go ahead and do it, and I committed. It wasn't planned or anything. I just told him last night, and I tweeted it out this morning. I had been thinking really hard about it for about a week.”

Next up? Telling his dad about his decision.

“I told Coach Swinney, and then I drove, and he (Coach Venables) was at the house. He was like, 'Dude, when are you gonna do this?' He didn't know anything about it at all,” Venables said. “I told him, 'I did it like 15 minutes ago.' And he was like oh really and was very happy, so it was good.”

Now he gets the chance to play with big brother Jake.

“That was a big influence, getting to play with Jake. That is a big part of it,” he said.

With the recruiting pressure off, he said he would continue to get ready for his senior season with the Lions.

“I will continue to train,” Venables said. “I will go to Clemson's camp on Tuesday, and I will train all summer, and I will work on getting better for my offense in high school. Now that is over, I can worry about high school football.”

What does he bring to the table?

“I bring dedication, a leader, very hard-working,” Venables said. “I never quit. I give relentless effort.”

Clemson’s 2020 recruiting class is ranked No. 1 nationally, and Venables is excited to be a part of such a special group.

“According to Rivals and all of those, I am probably going to bring the class percentage down. So, sorry about that,” he said with a laugh. “It's humbling to be a part of all these 5-stars and great players and everything. But at the end of the day, I don't know if all that really matters. When you get on the field it's who can play.”

Venables passed for 3,006 yards and 26 touchdowns this past season, with four interceptions. He completed nearly 67 percent of his passes. He also rushed for 890 yards and 28 touchdowns as a junior.

I am committing to Clemson University.