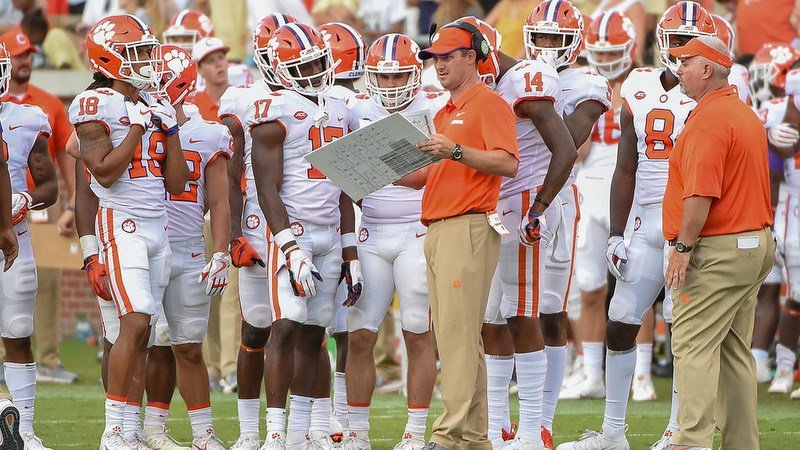 Jeff Scott says the Eagles will provide a stiff challenge

CLEMSON – Clemson’s offense has had its way with opposing defenses over the last month, but co-offensive coordinator Jeff Scott says he understands that Saturday’s game against Boston College will be a tad more difficult.

No. 2 Clemson plays at Boston College at 8 pm Saturday night in Chestnut Hill, and win for the Tigers would give Clemson the ACC Atlantic Division Championship. A win by Boston College would keep the Eagles in the race for the crown.

Scott says the Tigers have their next goal in sight.

“We've been racking off a lot of different records and things that haven't been done - I don't believe there's been an ACC team win four division trophies since they started the two divisions. So, that will be something our guys have an opportunity to accomplish."

The Tigers have won seven in a row against the Eagles, but Scott says Boston College has the Tigers’ respect.

“Have a lot of respect for Boston College. They are very, very consistent. You know exactly what you're going to get with them,” he said. “Very well coached, disciplined, very physical, hard-nosed team and defense. They're going to make you earn everything that you get - there are not gimmes with their defense. There never has been. I think that they're playing very confident on defense and I think they're very experienced. They've got nine starters coming back from last year's defense and eight of the 11 starters on defense are all juniors or seniors.

The game is another chance for the Tigers to break out the orange britches, worn now in only championship games.

"It will be a great challenge and like we tell our guys when you are trying to accomplish something special and have a chance to win championships, it's not going to be easy,” Scott said. “It's difficult. If it was easy, then there would be a lot more people doing it. So, it will be a great challenge, but I know our guys are excited about it and looking forward to it.

“When Coach Swinney took over, he wanted to bring some uniformity to our uniform policy. In the past, it was seniors get to vote what they want to wear, and Coach Swinney wanted there to be some consistency. I think from the beginning, he started that we only wear those orange pants when there's a championship on the line. So, I think our guys know that we've got an opportunity to win the division championship this week and that means we get to put those orange pants on and it's something that they look forward to and take a lot of pride in."