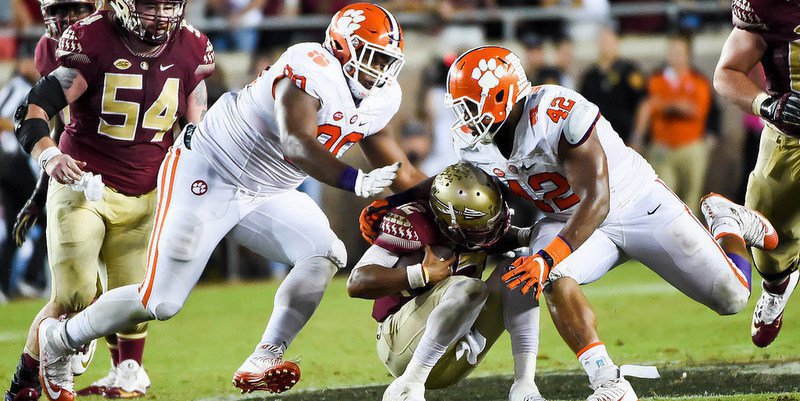 Lawrence and Wilkins form a dynamic tandem at defensive tackle

CLEMSON – Members of the Clemson media pool were given a special treat Tuesday – two of the nation’s best defensive tackles opted to do a joint interview session. What happened next was pure gold.

Junior Christian Wilkins and sophomore Dexter Lawrence are known around the country as two of the nation’s best at their position, and the duo has earned a bevy of preseason All-American honors. To those that know them best, however, Wilkins and Lawrence are both bright, engaging, and funny.

In other words, it would be a lot of fun to just hang around them for an afternoon.

Example A: Wilkins has often said he looks on Lawrence as a little brother, and when he was asked about that relationship and things they do together (other than eat, but more on that in a minute) Tuesday, he smiled and gave the perfect answer.

"Everything, I take him to the park, get his hair cut,” Wilkins said. “Different things like that I guess, teach him how to talk to girls, things a big brother would do."

The image of Wilkins leading Lawrence to the park is sure to bring a smile to anyone’s face, and Wilkins makes sure everyone knows that he’s better than Lawrence.

"Well, I’m a little more athletic. He’s just a big guy who clogs up holes (laughs) and I’m a little more sexy,” he said. “I can be the power guy but I’m just a little more finesse, I use my speed and ability to shed blockers. Dex is a freak though, too. You know, he just powers through the way that he does." 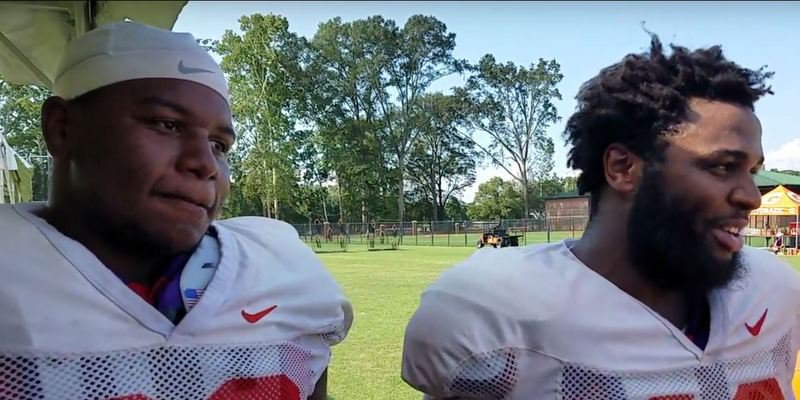 Lawrence and Wilkins form a dynamic tandem at defensive tackle "

Wilkins said the pair bonded on Lawrence’s official visit, and it’s a story that until now has remained a secret.

“I took advantage of all of my officials. I ate up and I ate good, so that was the first time we met,” Wilkins said. “All of our stories go back to food and a lot of them have to do with food. On his official, I'm challenging him. I'm like, 'Dexter, it's all covered. Just get two or three steaks.' He was obviously just tearing it up and going at it. It was funny to see that and we just bonded then. We definitely knew our connection would be tight if he decided to come here and if he didn't, I'm sure we would've had some type of relationship. I'm glad he came here.”

Lawrence smiled when someone suggested that Wilkins makes Lawrence his favorite target, saying, “There ain’t no picking going on” while making it known that Wilkins is someone that makes everybody better.

“It's just his attitude every day. How can you not love him, really? Every day he comes out with a positive attitude,” Lawrence said. “You never see him down and he's always looking to work harder and do extra work. He respects everyone, and that's the biggest thing. He doesn't treat anyone differently - no matter if it's the last walk-on on the team or the top guy on the team. He treats everyone the same with respect, care and loving.”

Wilkins then took an opportunity to take another brotherly jab at Lawrence, who didn’t score a touchdown during his freshman campaign.

"I know Big Dex wants to be like his big brother and score a touchdown, but it'll come when it comes,” he said before casting a sideways glance at Lawrence. “If it comes."

But Wilkins had a quick rebuttal, saying, “As long as I'm here it probably won't come because I'm gonna be the one to score touchdowns."

"It's still fat boy. He's still a large human being,” Wilkins said. “It doesn’t matter how much weight he loses, he'll still be fat boy."

Wilkins finally relented and showed just how much he cares for Lawrence and the rest of his teammates.

“Dexter is my guy, that's my little brother for real. I come from a big family and I'm the baby so it's nice to have a lot of younger brothers on the team,” he said. “Me and Dexter have a really close relationship and I have a lot of love for the guy. We just really push each other on the field every day. You're never going to let the little brother beat you, but you can kind of see the little brother getting better, better, and better and you're like 'Oh shoot,' you're getting scared a little bit but he'll never beat me.

"At the end of the day, no matter who you are, people are people. These are my brothers and the guys I spend the most time with. I don't know what anybody is going through all the time, so I just try to be someone who is positive and show a lot of love and show them that I care and just be a friend to everyone. I guess that's just my personality and mindset."

Both players got serious when asked about all of the accolades they’ve received, with Wilkins saying the honors aren’t worth anything unless they’re backed up by the play on the field.

"All that All-American stuff is a bunch of bull crap right now, we have practiced hard all summer if that’s what they’re going off of, but that’s just a lot of potential right now,” he said. “All that the All-American selection says is that we had a good freshman and sophomore campaign and now a lot is expected of us, that’s really all that it means.

"That’s no better than getting a mom and dad all American, it doesn’t mean anything. I don’t have a trophy in my hand right now. It’s all potential, I appreciate the honor whoever does the voting, that means they see something in me but I still have to bring it each and every day, got to work hard, got to motivate this guy and that guy and just work hard and just play my best."