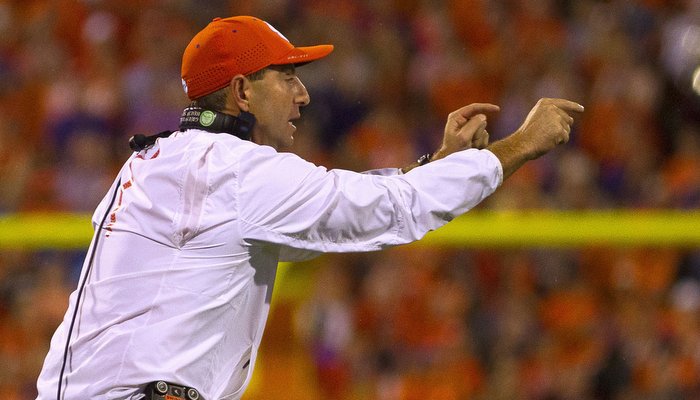 Swinney has the Tigers pointed in the right direction (Photo by Josh Kelly, USAT)

CLEMSON – Big Mo is wearing orange and with the change of clothes comes a culture change where Clemson’s program is not only respected, but feared.

The assembled media gathered in the hallway outside of Clemson’s locker room following the Tigers’ 23-13 victory over Florida St. Saturday evening, and the thump of music and laughs of the players and the coaches was evident to anyone who would listen.

There were the typical postgame shouts and boyish laughter, and certain players would peek outside the locker room with smiles broader than the hallway. They would smile and then duck back inside for more of a celebration and the message was clear – interviews can wait because it’s a good time to be a Tiger.

Last week was just one of those weeks, and it humbled head coach Dabo Swinney. The Tigers started out the week atop the College Football Playoff rankings and then broke ground on the new football operations facility Friday, starting the process of turning Swinney’s vision for the Clemson program into a reality. Then came Saturday – the come-from-behind, gritty win over the Seminoles and the presentation of the ACC Atlantic Division trophy.

The Tigers are headed to Charlotte and will play in the ACC Championship Game for the first time since 2011, and all of the momentum from Friday’s groundbreaking to the heroics of Saturday were an open book for dozens of high-profile recruits to see.

Prior to Saturday’s game, I asked someone close to the program what the message has been now that the Tigers are getting respect from the national media – Swinney played the disrespect card early in the season, but a number one national ranking precluded that. So now what?

The program has taken that next step, and could be in the process of having that special season that Swinney has talked about. The respect is there, grudging though it may be, and the next step is fear. I was reminded of all those great Florida St. teams under Bobby Bowden – there were athletes all over the field, from the skill positions to the trenches, and they were a team that nobody wanted to play. They were feared, and several Clemson teams took a merciless beating at the hands of those great teams.

This Clemson team wants to be that one that is feared. The skill players are there. The defense is there. The great quarterback is there. The offensive line is getting better. The depth is getting there. The only thing missing is a large sample size, but the Tigers are getting to that point.

Over the last 36 games, Swinney has compiled a 31-5 record with wins over Jimbo Fisher, Bob Stoops, Steve Spurrier, Urban Meyer, Mark Richt, Les Miles, Paul Johnson (twice), Brian Kelly and Bobby Petrino (twice). Pretty impressive for a guy that many have only seen as a cheerleader. If that’s the case, maybe some of these schools who have job openings should look into hiring a cheerleader instead of the next once-great retread.

The program also took a big step – at least in my mind – in the way they won Saturday’s game. Dalvin Cook broke off the big run on the game’s second play, but the Seminoles scored just six points the rest of the way. Deshaun Watson had a bad – let’s just go ahead and say it – first half. Swinney said in the locker room afterward that he was ready to kick Watson’s you know what.

The Tigers went to the locker room having made countless mistakes, saw their quarterback suffer through maybe his worst half as a Tiger, kept points off the board because of careless mistakes in the red zone and had taken Florida St.’s best shot. Yet they trailed by just four points.

What followed was domination. Florida St. went up 7-0 on the Cook run, but was outscored 23-6 the rest of the way. Watson had a half to remember, the Clemson offense wound up with over 500 yards of total offense and the defensive line owned the line of scrimmage.

Two straight weeks now I’ve seen games that previous Clemson teams would have lost but wound up being double-digit wins. Despite myriad mistakes. Despite the adversity.

Yes, this team should be respected. But that fear? It won’t be far behind.

Big Mo has on his orange jacket, and it’s a good time to be a Tiger.