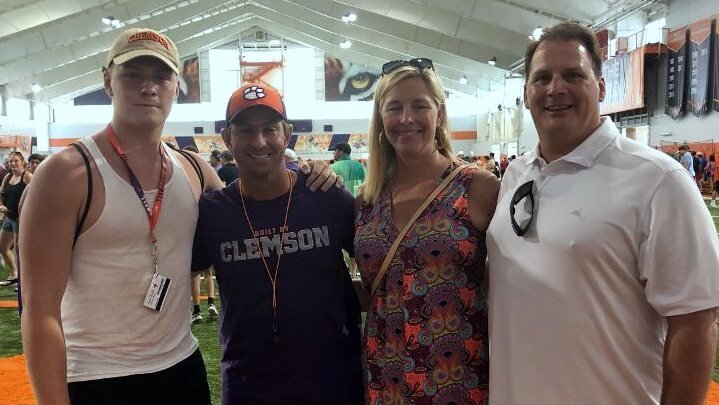 Many high school football prospects travel the camp circuit during the summer, hoping to catch the eye of a coach or two and earn a coveted scholarship. Walker Parks made that happen this week.

Parks, a Lexington (KY) Frederick Douglass 2020 offensive tackle, earned an offer from Clemson following a strong showing at the Dabo Swinney Camp on Wednesday and Thursday. It was Swinney himself who made the offer.

“After the camp was over Coach Swinney was talking to my parents,” Parks said. “So I went over and he’s the one who told me.”

How does he feel about earning an offer from a team that has made the College Football Playoff three years running?

“Very emotional,” he said. “I have worked very hard and for many years for that opportunity. I couldn’t be happier about this.”

While he was on campus, he got an up close and personal look at Clemson’s facilities, generally regarded as the best in the nation.

“The campus and facilities are unreal,” he said. “Beautiful area with great facilities. They have a very nice setup.”

He also spent time with offensive line coach Robbie Caldwell, who was impressed with Parks.

“I got to spend three days with him,” Parks said of Caldwell. “I love the way he coaches and he’s always making jokes, so practice goes by really fast.”

“They are very high on the list,” Parks said. “I have nothing but love for Clemson.”

He said he plans to camp at Tennessee and Notre Dame next. He attended games at Louisville and Penn State toward the end of last season and has visited Kentucky, Northwestern, Notre Dame, Tennessee and Cincinnati this year.

His father, David Parks, played football at Kentucky. His mother is a Kentucky alum as well.

After a great camp I am extremely honored to receive an offer from Clemson University pic.twitter.com/yTgG1urgan

Nothing better than picking up the phone and getting great news for a great kid. Congrats to @walkerparks64 on your offer from @ClemsonFB @OLCoachCaldwell pic.twitter.com/NzhQYlLXM3