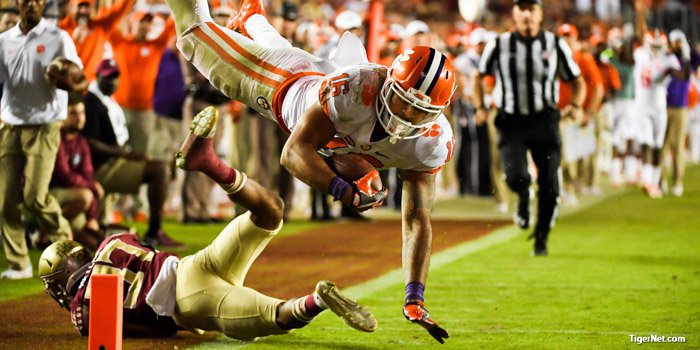 Leggett breaks free against the Seminoles

TALLAHASSEE, FL – Jordan Leggett stood in the back of the endzone at Doak Campbell Stadium early Sunday morning, his back against the brick wall of the stands, patiently answering questions from the reporters when a lone Clemson fan walked above him and shouted, “Jordan Leggett is the man!”

Leggett turned his head slightly to acknowledge the praise, and smiled to show his appreciation.

Saturday night in Tallahassee, when Clemson’s back was against the wall, Leggett came up with the kinds of plays that define a season.

Leggett ended the evening by catching five passes for a career-high 122 yards, including the go-ahead touchdown on a 34-yard reception with just over two minutes remaining in the game. It was Leggett’s fourth touchdown of the season, and the 15th of his career, a Clemson record for tight ends.

On that final drive, Leggett caught three passes for 70 yards, and when he walked reporters through the touchdown play, it showed the maturity that has propelled the Florida native from a player who self-nicknamed himself "Lazy Leggett” into the kind of player who makes the plays.

“We had run that play earlier in the game and just missed it so I knew we would come back to it,” Leggett said. “When I lined up, I saw the corner had Mike (Williams) in man-to-man, so I knew I didn’t have to worry about him. Hunter (Renfrow) was lined up in the slot, and he had the SAM-backer covering him. We had been running Hunter on the post, but on this play we run Hunter straight down the field and that kept the safety’s eyes on Hunter, and I was able to get open. Earlier, Hunter had gotten caught up and the play didn’t work, but this time it did.”

Co-offensive coordinator Tony Elliott praised Leggett for getting open for the touchdown. 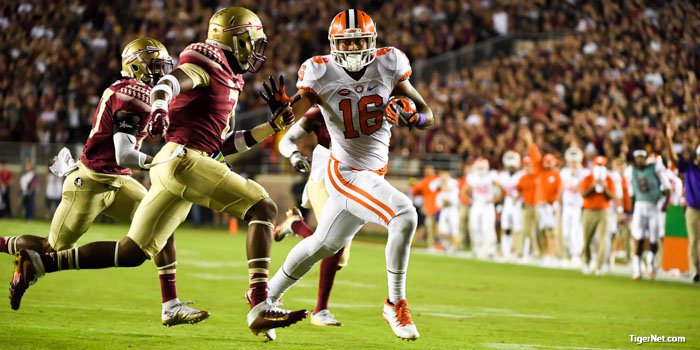 Leggett breaks free against the Seminoles "

“We saw the play on the first drive that we found into boundary in the middle of the field. We wanted to find another situation throughout the course of the game and open the series with that,” Elliott said. “We have different guys based off of the coverage that we're going to go to, but it just presented itself and Deshaun found him. On that last one, he did a good job of setting up the route and found a way to get himself wide open.

“They were giving us some zone looks, especially to the field. They were playing a little bit of cloud coverage trying to trap a little bit over Mike and take Mike away, but in doing that you have to commit a safety to the boundary so you're going to be a little bit softer with your zone coverages to the field. They were playing consistently the same zone coverage on first and second down so we felt like in the right opportunity and the right field position we could call certain plays and it worked out.”

Leggett may not always get the big numbers against South Carolina, Boston College and Wake Forest, but he comes through in the big games.

“One of my coaches said that I always tend have a good game during the games against the bigger teams,” Leggett said. “I don't know what it is. I love to compete and this is the ultimate competition just being here in this stadium and going against those guys. It's pretty ridiculous. It was definitely a big night for me. Things just ended up being very open - the seams and everything like that the whole game. It definitely worked out for me in the middle of the field the whole time.

“Like last year, I had a big game over the middle and through the seams. They kept it the same this year so we hit them in the same spot. It was more of a cover two or empty with a formation on the sideline. They ended up going too high and didn't have anybody in the middle of the field.”

Elliott said Leggett has been the perfect representative of what a team player should be.

“He's back home in his home state. He's a senior. He's got an opportunity to break records as one of the best tight ends to ever play at Clemson and he's hungry,” Elliott said. “He came to me earlier in the week and said, 'Look, anything I can do to help this football team win.' When a guy does that, you know he's ready to play and anytime you can find an opportunity when you have a matchup and he creates a matchup problem. I'm happy it worked out for him because he's been a guy that's been kind of patient.

“He did a lot for us early in the season last year and got off to a little bit slower start with some of the calls that didn't go his way. We targeted him earlier in the season but it didn't work out. I'm happy that he's gotten going because anytime he gets going and can be effective, he allows us to be balanced but he allows us to put pressure on the defense with the matchup problem.”