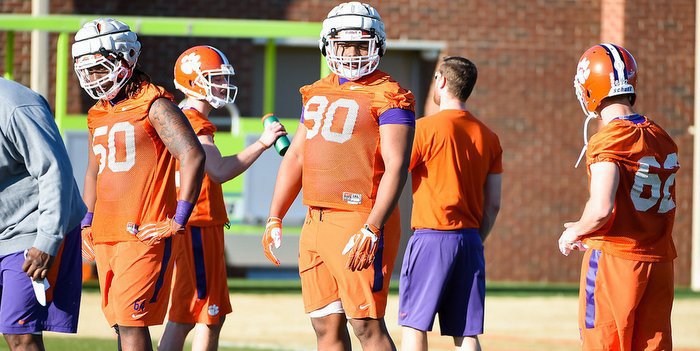 Deshaun Watson and Wayne Gallman had their good moments Wednesday

CLEMSON – Wednesday’s stadium scrimmage featured bad snaps, an electric play by freshman Dexter Lawrence and the continued improvement in Clemson’s special teams situation. In other words, it was a typical mid-spring scrimmage coming off of spring break.

The Tigers practiced for over two hours inside Death Valley Wednesday afternoon, and head coach Dabo Swinney said the Tigers would have gotten beat if they had played an opponent.

“We would've gotten beat if we would've played a game today, that's for sure. There was a lot of good. I saw a lot of good things on both sides, but just too many things that we control that we didn't do a good job of. Inconsistent with our snaps,” Swinney said. “We had some ball handling stuff. We had a couple of turnovers. Defensively, we were charitable at times. We were jumping offsides. We had a couple of penalties. First scrimmage and repping three groups and a bunch of these guys it's their first time to really get a legitimate shot. We'll get better from it. They worked hard. They competed.”

“Big Dexter had a pick on his first snap and (Hunter) Renfrow hawked him down and just tomahawked him. It was unbelievable. There was some fun stuff. C.J. Fuller ran well. I thought Adam Choice ran well,” Swinney said. Wayne (Gallman) was Wayne. Deshaun (Watson) did some good things. We got the other quarterbacks a bunch of snaps. Trevion (Thompson) started slow but finished strong. We started him today and he caused a pick in the redzone on the opening drive, so we demoted him. 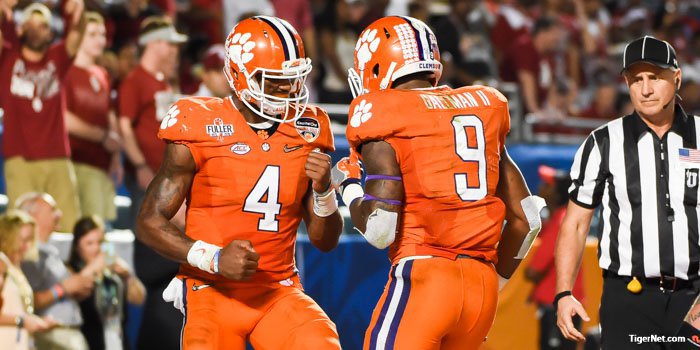 Deshaun Watson and Wayne Gallman had their good moments Wednesday "

“He didn't pout and he came back and had two huge plays with one of them for a touchdown. It was good to see him respond the right way, but he's got to be ready. You've got to show up ready to compete. A lot of good things are happening but we're a work in progress and we've got a bunch of moving parts right now. Hopefully the guys who had a good day today can be consistent next week and show that consistency, and the guys who maybe didn't do as well as they'd like will improve. That's what we're trying to do is keep getting better. I like their chemistry and if we keep competing like that I think we are going to be pretty good.”

Any separation at defensive end?

“Nah they are all bundled in there and they are competing. We are a long way from saying, 'they are the guy.' Whoever ends up starting there is going to be a lot of competition from guys that deserve to play. I am very pleased as far as the ability that I've seen and the want-to from Austin (Bryant) - he's played a lot and he's confident. Clelin (Ferrell) is going to be a good player. He has a lot to learn, he jumped offsides today in a critical situation. (Richard) Yeargin is really blossoming and showing up. I think (Chris) Register is improving a ton. I am pleased with that group. I am anxious to get Xavier (Kelly) in there this summer and see how he mixes. The other thing I think we have found out that I didn't know is that (Christian) Wilkins can play end. I am really excited about what I've seen out of him. That gives us a wild card because we've got depth inside. We're very talented but inexperienced on the edges right now. LaSamuel (Davis) has a ways to go physically. He wants to be a good player but he has to develop physically. Xavier will be ready physically, but I don't know where he will be mentally as a freshman. But coming out of the spring knowing that Wilkins can not only play end but can play well and can do everything we need him to do is the most comforting piece of knowledge I've been able to get this spring. He can bounce around and can be a good player inside and obviously add to the depth outside.”

“We did live kickoffs, live punting, live punt return and kick return. We've really worked hard and today was the first time we've spent the majority of the time on film work and footwork and drills and really made sure they understand what we're trying to do. Today was the first time we've had some guys really show up and I am anxious to watch it. Tanner Muse is a guy that just jumps in my head. This kid is going to be a special teams demon. His speed is showing up because he's just more confident. I think we have a lot of guys that want to be involved in special teams.

“(Greg) Huegel kicked off well. In fact, he kicked it off into the wind on the first one and kicked it about four yards deep into the end zone. The biggest thing with him is just maturity and strength and growing. He has the leg. And (Jamie) Skalski will get his chance to be the guy.”

Battle at right guard between Tyrone Crowder and Maverick Morris

“Just battling. To me, there really isn't a lot of difference between them. They can both do good things. We think a lot of Crowder. He is a powerful man in there, and it's the same thing for Mav. I can't say enough good things about him. (Taylor) Hearn is starting to come on, and we are really blessed on the offensive line. (Justin) Falcinelli can be as good as we've had come through here. He has that type of ability. It's really just him making his mind up. He's a brilliant young man but sometimes he's not as focused football wise as he needs to be. But those two young ones - (Sean) Pollard and (Tremayne) Anchrum - those two right there I am glad they are on our team. Both of those young men have bright futures for us.”