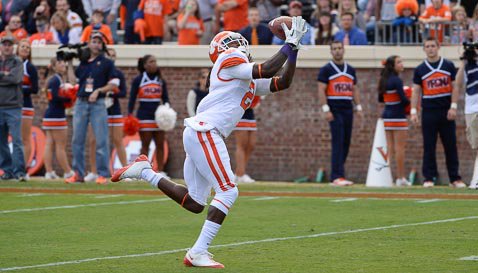 During the early part of the second quarter in Saturday’s 59-10 Clemson win at Virginia, the NFL scout sitting next to me in the press box threw up his hands in exaggerated exasperation at a play by Clemson quarterback Tajh Boyd, looked at me, and said, “How can you not see or even look at the best player in the stadium?”

That best player just happens to be wide receiver Sammy Watkins, who is putting together a stellar junior season, a season that will more than likely be his last at Clemson. And he is doing it despite drawing consistent double teams and bracket coverage as teams force Boyd to look elsewhere on certain plays.

He then said, “And if we (meaning his NFL club) keep playing like we have been, he will be right in our wheelhouse on draft day.”

The message was clear – enjoy him while you can Clemson fans; you have just four more games to watch him play with that signature paw on his helmet. I tried to get people to understand with C.J. Spiller and even Nuk Hopkins that greatness like this doesn’t come around as much as we would like, and you have to enjoy every second they are at Clemson.

In 2012, Hopkins caught 82 passes for 1,405 yards and 18 touchdowns, with the latter two setting Clemson single season records. For his career, Hopkins had 206 receptions (second all-time at Clemson) for 3020 yards (first all-time) and 27 touchdowns (first all-time).

Watkins also set the Clemson career record for 100-yard receiving games last week, notching the 13th of his career, breaking the record he shared with Hopkins.

The Tigers have a lot to play for over the next three weeks and the bowl game, and all of it will be fun to watch. But it will also be fun to watch Watkins as he continues to make his mark in the Clemson record book. Can he set them? Yes. Will it be difficult? Yes, especially considering that one of those games is against The Citadel, and he might not play the entire contest, and the other is against a South Carolina defense that has managed to limit his play-making ability.