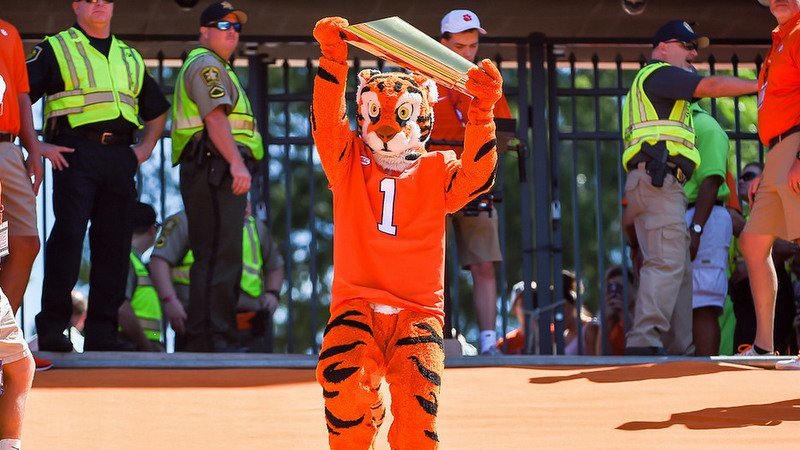 At Clemson, Best Is Standard

CLEMSON – The Sports Information staff at Clemson always does an excellent job on the football media guides, and we picked up our copy of the 2018 media guide at the ACC Football Kickoff in Charlotte last week.

As always, I am amazed at the amount of information in the guide, but as I sat awake one night last week I began to read. Some of the stats and notes in the media guide deserve to be shared with everybody, so I hope you forgive me for taking a break from the latest position battles to show the kind of program Clemson has at the moment.

THREE ACC TITLES IN A ROW

Clemson has won three straight ACC championships, one of just two Power Five Conference schools to have an active streak of three in a row. Oklahoma has also done it the last three years. Clemson will attempt to be the first ACC school to win four in a row outright in 2018. Florida State was a champion or co-champion nine years in a row from 1992-00, but it never won more than three outright championships in succession.

As far as the College Football Playoff, Clemson has been selected three of the four years the system has existed. Alabama has the most wins (5-2), and Clemson is second (3-2). Ohio State is third (2-1). It is interesting to note that the No. 1 seed has never won the College Football Playoff, and Alabama or Clemson has been the top seed each of the four years.

Clemson was picked No. 8 in the AP preseason poll in 2013 and finished No. 8. Dabo Swinney is the first head coach in history with a seven-year streak in that area. John Cooper (Ohio State) and Bill Snyder (Kansas State) had five-year streaks.

Clemson had top-15 matchups over Auburn, Louisville, Virginia Tech, Miami (Fla.) and Alabama in 2017. The Tigers won five and became the first team since the AP poll started in 1936 to beat three teams in the top 15 in the month of September. The Tigers are very experienced in big games the last three years. The 2018 Sugar Bowl was the 13th matchup of top-15 teams since the start of 2015. The Tigers are 11-2 in top-15 matchups over the last three years.

Clemson has been ranked in the top 25 of 52 consecutive polls dating to the 2014 season, the third-longest active streak in the nation. That includes a streak of 43 straight top-10 rankings, tied for first in the country with Alabama. As far as total top-25 rankings during the last seven seasons, Clemson has appeared in 107 of a possible 114 polls (94 percent). That is also the third most in the nation, trailing only Alabama (114) and Oklahoma (110).

When it comes to the combination of on-field success and academic progress, few schools are more successful than Clemson. During the last seven seasons, the Tigers have finished in the top-10 percent in APR scores among FBS teams and in the top 25 of the polls a total of six times. That includes the 2017-18 academic year, when the Tigers finished No. 4 on the field in the polls and No. 5 in APR score (987). It marked the first time a College Football Playoff team finished in the top five of the APR. In 2017, it marked the third time in the last six years that Clemson finished in the top 10 of APR and the top 10 on the field in at least one of the polls.

*A total of 183 of the 188 senior lettermen (97 percent) in Dabo Swinney’s nine full years as head coach have graduated. That includes all 24 seniors on the 2016 National Championship team and all 11 seniors on the 2017 team that reached the College Football Playoff.

*Clemson had its highest four-year average APR score (987) according to data released by the NCAA in May 2018. It was the seventh time in nine years under Dabo Swinney that Clemson was ranked in the top-10 percent of all FBS schools. Clemson’s APR score for the 2016-17 year was 1000, its highest ever and the first perfect score in program history.

Clemson has a history of decorated football players. The program boasts 89 different players who have earned first, second or third-team All-America honors in its history. The list includes eight players who were named at the end of the 2017 season. That was a record for one season, breaking the record of seven set by the 2016 National Championship team. The list of players who made an All-America team during 2017 were Austin Bryant, Clelin Ferrell, Dorian O’Daniel, Christian Wilkins, Dexter Lawrence, Mitch Hyatt, Tyrone Crowder and Ray-Ray McCloud.

Dabo Swinney has a record of 101-30 in his head coaching career in 10 seasons. Last year, he became just the fourth Division I coach to total 100 wins in his first 10 years. The others are Bob Stoops, Chris Petersen and Urban Meyer.

With his 101 wins, Swinney is already fourth in ACC history in coaching wins. Bobby Bowden leads the way with 173, George Welsh is second with 136 and Frank Beamer is third with 113. (The list takes into account only the years the coach worked in the ACC.)

Swinney has 13 wins over SEC teams in his career, most among active non-SEC coaches in that time period. He is 5-1 against the SEC in the last two years.

Swinney won 12 coach-of-the-year honors in 2015, two ACC and 10 for national coach-of-the-year. That included National Coach of the Year by Associated Press, ESPN, Sporting News, Watler Camp Foundation, and the American Football Coaches Association. The former Alabama player also won the Bear Bryant Award in 2015 and 2016. Swinney also won the Gene Stallings Award and the FCA Coach of the Year in 2014 and the Bobby Dodd Award in 2011. Swinney was inducted into the state of Alabama Hall of Fame in 2018.

A Clemson assistant coach has won the Frank Broyles Award each of the last two years. Brent Venables won the honor in 2016 and Tony Elliott won it in 2017. It was the first time two different coaches from the same school won the award in consecutive years.