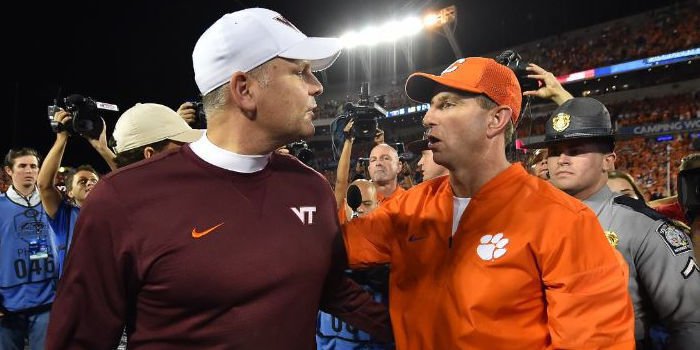 Number two Clemson squares off against No. 12 Virginia Tech in Blacksburg, Virginia, Saturday night in an early-season ACC showdown.

With that in mind, TigerNet and a Virginia Tech website, The Key Play, agreed to do a back-and-forth Q&A about the contest. TigerNet sent a series of questions to writer Joey Coogan, from the game itself to things to see and do in and around Blacksburg.

Hope you enjoy the look from behind enemy lines!

TNET: Virginia Tech made the ACC CG last season, and Justin Fuente appears primed to make it two years in a row. Have fans fully bought into Fuente, and is there a feeling up there that a return to the glory years is here?

COOGAN: Fans are 100% bought in. Fuente has been a perfect fit for Blacksburg, a soft-spoken but intense young coach who's seemed to perfect the balance between general manager and offensive mastermind. I think it's still premature to proclaim a return to the glory years of Virginia Tech football, but Fuente's certainly on the right track. A win on Saturday night in Lane Stadium? Maybe then we could entertain that conversation.

TNET: What are some must-do things for Clemson fans coming up this weekend? I know a lot of the fans are coming up early Friday, so what are the two or three items they have to see or do before they leave?

COOGAN: Number one, I'd recommend walking the campus. Take a loop around the Drillfield, stop by the April 16th memorial, and then make your way over to the athletic facility to check out the new indoor football building affectionately known as the "Beamer Barn." Beyond that, there's no shortage of local watering holes sprinkled throughout the downtown area, and you'll be bound to run into a flock of Hokies once 5 pm happy hour hits on Friday night. I'm biased towards Sharkey's and TOTS (Top of the Stairs) from my time as an undergrad, but Big Al's and Hokie House are popular spots as well. If you stop by TOTS, ordering a rail is a Blacksburg rite of passage. Don't get more than two if you have to work on Monday. 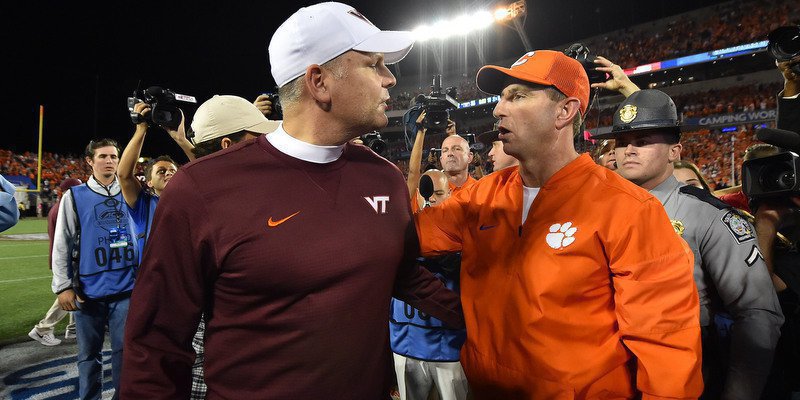 TNET: After Saturday, Clemson isn't scheduled to play in Blacksburg until 2031, and the two teams won't meet in the regular season until 2024 when the Hokies visit Death Valley. For two fan bases who are so similar in their passion for football, that's a shame to me. But how do the Hokies feel about it? Wouldn't it be great if the two could square off a little more regular?

COOGAN: Honestly, I think it's the perfect embodiment of #GoACC. It's clear the growth of the league makes scheduling difficult, but the conference has to find a way to get its marquee programs on the field together more often. There's no reason Tech should be playing Boston College every year, and I imagine Clemson fans would be thrilled at the opportunity to see less of Paul Johnson's triple option. Whether it's tweaking the annual cross-division rival pairings or expanding to a 9-game conference schedule, something needs to be done. That said, I'm not holding my breath.

TNEt: Josh Jackson has had an impressive start to his college career. What former Hokie signal caller does he remind you of, and what can Clemson fans expect to see out of Jackson Saturday? What makes him so special?

COOGAN: Jackson's not drastically different from Jerod Evans, the Hokies' signal-caller from a year ago who Clemson fans likely remember from the ACC Championship game. Evans was a little larger in stature, but they have similar qualities in terms of running ability and accuracy throwing the football. Jackson won't wow you with any one aspect of his game, but his steadiness and poise seem to stand out. He'll enter Saturday evening with an 11:1 career touchdown to interception ratio, so limiting mistakes and executing at a high level have been Jackson's calling cards through four games.

TNET: Bud Foster and his defense are legendary. What do the folks up there think Foster will do to try and disrupt the Clemson offense?

COOGAN: Bud's always got a trick or two up his sleeve, but the one constant over the years has been his desire to stop the run. It's the first thing he'll mention in pressers, and it's never coach-speak. Given that fact, I fully expect Bud to focus heavily on bottling up the Clemson run game, content to match-up man-to-man on the outside with another supremely talented cornerback group. That's a second theme of Bud Foster defenses: when he can trust his secondary in man coverage, it gets scary real fast. Adonis Alexander (coming off a suspension, but I expect him to play), Brandon Facyson, and Greg Stroman certainly fit the bill, and I like their matchup against the Clemson receiving corps. That's not to say Clemson won't be effective offensively, but I'd be surprised if either team enters the 30's this week.

TNET: There have been a lot of big games played in Lane Stadium, but this is a big-time match-up. Where does this one rank in terms of importance? Most important home game since.....when?

COOGAN: It's certainly the biggest game at Lane in recent memory. Ohio State in 2015 garnered significant hype, but Braxton Miller and company ran away from the Hokies after starting quarterback Michael Brewer went down early in the second half. There were a slew of huge games in the mid-2000's - Miami in '03 and '05, Boston College in '07 - but I think it's fair to say Saturday night takes the cake for at least the past decade.

TNET: What is your prediction and score? Can the Hokies stake an early claim to supremacy in the ACC, or will the Tigers prevail?

COOGAN: It's tough to pick against Clemson in this one. I think the matchup to watch early is Clemson's defensive front against the Hokies' offensive line. If Tech can hold their own and give Josh Jackson time to settle in, I don't hate the Hokies' chances. That said, Clemson's ultimately the deeper and more talented team, and I think they'll overcome what promises to be a raucous environment and return home 5-0. Clemson 23, Virginia Tech 17.