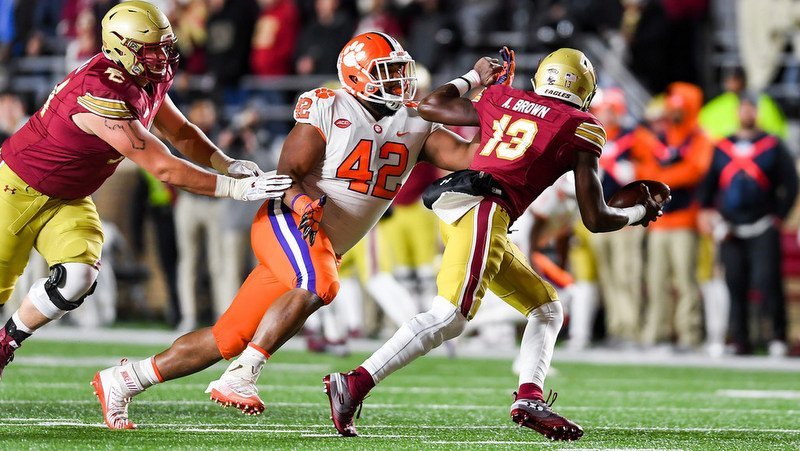 Boston College quarterback Anthony Brown left Saturday’s game against Clemson after a jarring hit from defensive tackle Christian Wilkins on the Eagles’ first drive, winding up in an area hospital with an abdominal injury. The good news is that Brown is out of the hospital and should be back at practice this week.

Clemson defeated Boston College 27-7 in a battle for ACC Atlantic supremacy, and the loss of Brown dealt the Eagles a blow they couldn’t recover from. Wilkins landed on Brown, and Brown stayed on one knee for several minutes before being taken to the locker room.

Boston College head coach Steve Addazio spoke about the incident with the media Monday and said it’s the kind of hit that is illegal in the NFL and the rule should be changed in the collegiate ranks.

“Yeah, probably. People have told me that. I don't know all the rules of the pros out but yeah,” Addazio said. “The NCAA is really proactive in trying to do everything they can for player welfare. That's what's going on with all the hits to the head and cut blocks and really a lot of conversation about kickoff return teams. They are really working hard, which I'm a real big proponent of, trying to make the game safer.

“So yeah, I think it's reasonable to say that's probably another rule change that could occur. I'm not on that committee per se but that would make sense to me. They are trying in the NFL to really protect the quarterbacks at a high level, and I get that, they take a lot of tough shots.”

“That was kind of a really unique thing, and certainly by no means any ill intent or anything like that,” Addazio said. “It was just guys trying to play hard and part of the game, but I think that's a piece that we can help taking some of the -- it will be controversial early, just like the targeting rule is. And nothing is perfect, but I think these are all things that we can grow with to make the game safer.”

Clemson head coach Dabo Swinney called to check in on Brown after the game.

“Well, Dabo is that kind of guy. I wouldn't say it's unique but I think it shows you he's -- I like Dabo a lot because I think Dabo is a great guy,” Addazio said. “I think he's a sincere, caring guy. I think Christian is a great guy and a sincere, caring guy, and I think that was really terrific that they did that. It speaks who they are. I think it's good for college football and these are good people. These are good guys.

“We all understand you get on the field and you are battling against each other. It's a tough sport but at the end of the day your thought process is you want the best for everybody. You don't want to see anybody get hurt. You don't want to inflict anything on anybody. You are just trying to do the best you can to make a play.”

Addazio also said that Wilkins was trying to reach out to Brown.

“I spoke with Dabo via text. I spoke to him after the game,” he said. “And via text he had mentioned to me that Christian was looking to reach out to him. I don't know that that occurred. I haven't talked to Anthony about that. I would assume it might have, but that's what Dabo had mentioned to me via text.”