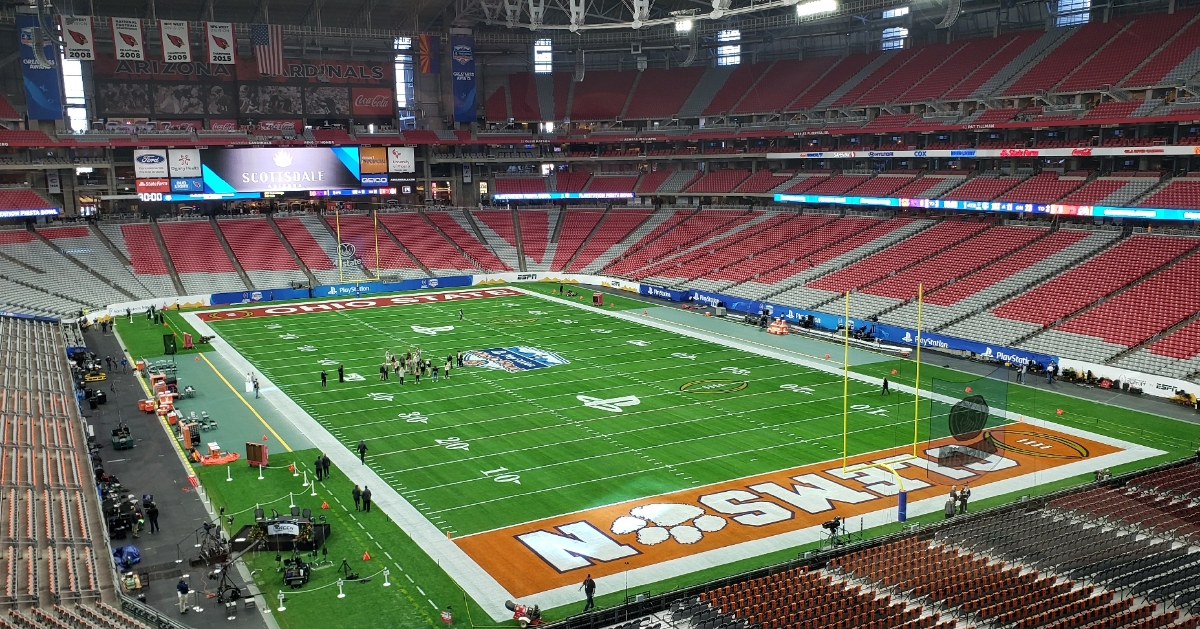 It's almost time to get things kicked off

GLENDALE, AZ – The stage is set for what should be a fantastic night of football at State Farm Stadium in Glendale.

TigerNet has six people on site and we are all already set up and hope to be able to bring you Clemson’s arrival at the stadium and a lot of the pregame pomp and circumstance. After more than a few days of rain in the Valley of the Sun, the day dawned bright and sunny. Temps are in the mid-50’s but with ferocious wind gusts that make it feel at least 10 degrees colder. As a result, the roof is closed.

Now, on to what we’ve seen and heard heading into the last few hours before kickoff.

A lot of people message me on the day of the game and the night before to ask about the “vibe” or atmosphere. I can sum that up in a few words. On the bus ride into the stadium, I was talking to Nikki about how we made this same ride three years ago with the same Ohio St. media members and I wondered then if the two programs were about to start on the kind of run that has seen Clemson and Alabama play several times over the last five seasons.

The general feeling is that with Ryan Day at the head of the Buckeye program and the way they are recruiting, this won’t be the last time we see these two teams match up in the postseason. Clemson certainly isn’t going anywhere and the Buckeyes seem to have a stranglehold on the Big 10 right now and it’s no secret that the Tigers and Ohio St. are recruiting many of the same players.

In talking to members of the staff this week – both on and off the record – this team has gone about its business with quiet confidence. In fact, the feeling is the same as it was last season before games against Notre Dame and Alabama. Dabo Swinney has built his program for moments like these and when it’s time to work, it’s time to work.

I noticed during the second bowl practice that this team had somehow “flipped the switch” and was in business mode. There was none of the laughing and joking that we saw in the first practice. I also really love the leadership on this team. That was one of the biggest questions heading into this season, but this team has a quiet but effective group of leaders. Many of those voices are the old men on the offensive line – John Simpson, Sean Pollard, Gage Cervenka, and Tremayne Anchrum.

The skill players get all of the publicity, but that group is in many ways the heart and soul of the team. Think about it – this is Sean Pollard’s sixth College Football Playoff game. He’s been here, on this stage, before and he has two rings he wears that denote he’s won the ultimate team prize.

As we were finishing interviews Thursday and the Tigers were filing out of the room, Anchrum walked up beside with a huge grin on his face. I looked at him and told him to simply go out here in these last few games and have fun. The smile widened even further and he said, “I always do.”

While Ohio St. and Ryan Day have gone around looking like they feel some of the pressure of the moment, Swinney and his players have been enjoying every second. Will that make a difference in the game? I am not sure, but it can’t hurt.

And finally – I wrote in the prediction that I think we could see some different things from Brent Venables and his defense as they attack Ohio St. quarterback Justin Fields. Kirk Herbstreit told us yesterday that in the Big 10, the defenses don’t show a lot of exotic blitz packages and he wonders if Venables can bring the kind of pressure that confuses the Buckeyes.

That brought to mind a mental image of Venables sitting in his hotel room, rewinding game video and scribbling notes down on a pad. He’s gonna bring the house and we all know it, and that’s one the reasons I am so eager to get this one kicked off.

This should be fun.