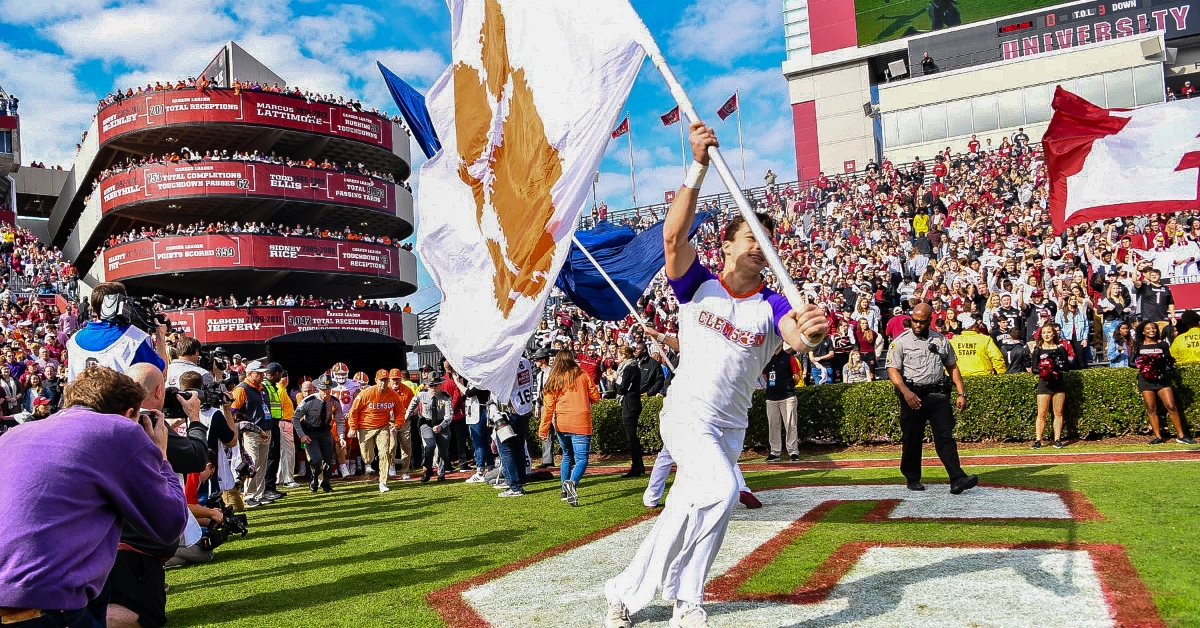 Clemson sits atop the rivalry right now and it isn't even close.

If you were fortunate enough to be in Williams-Brice Stadium Saturday for the rivalry game against South Carolina, you might have noticed that the proceedings were a bit subdued. Maybe even weird. Let’s face it, the rivalry between the Tigers and the Gamecocks isn’t what it used to be.

The walk from the media lot to the media entrance at the stadium is usually a fun one, a small insight into the tailgating and traditions of Gamecock football. The lots are always full of raucous tailgaters and fans, with music set at a high volume and with large TVs tucked onto the tailgates of pickup trucks. What is normally noisy and boisterous was quiet.

Pregame even felt off. The students were late arriving, and Clemson’s much-anticipated “Walk of Champions” was anticlimactic. Just as the Tigers locked arm, the stadium PA started blasting “Sandstorm” to try and get the students worked up. A few students turned their backs, a few reacted in the usual manner, but most acted like they didn’t care.

Other than South Carolina stopping an early Clemson drive, neither side of the crowd seemed to get into the game. Let’s face it, the rivalry has lost its luster.

Yes, Clemson has won six in a row and that’s part of it. However, South Carolina won five in a row and the rivalry was as strong as ever. Why? Because Clemson was relevant on the national stage, winning the ACC Championship in 2011, beating LSU in the Chick-fil-A Bowl after the 2012 season and the Orange Bowl after the 2013 season. South Carolina isn’t on anyone’s radar.

Under Will Muschamp, the Gamecocks have been outscored 184-55 by the Tigers. There was 56-7 in Muschamp’s first season, but for whatever reason Saturday’s 38-3 romp felt like the teams have even more distance between them.

Taking a deeper look at the South Carolina offense – the Gamecocks only scoring drive made it as far as the Clemson 21-yard line. The Gamecocks called timeout on 3rd-and-9 and then ran a running play into the middle of the field to set up their lone score. As one media member put it, Muschamp was waving the white flag in the first half. The 21 was as close as South Carolina would get to the red zone.

Much of the garnet-clad crowd stayed through halftime but after the Tigers scored early in the third quarter, the aisles began to fill as the fans headed towards the exits. Many diehards hung around, not because they were waiting on some miraculous comeback, but more out of a love for their school and a sense of loyalty to the players.

To me, the talent gap is wider now than it was in 2015. Clemson is loaded across the board and will return players like Lawrence, Xavier Thomas, Justyn Ross and Lyn-J Dixon next season. The Tigers also have one of the nation’s top – if not THE top- recruiting classes coming on board. The talent gap will be even wider next season. And, with all due respect to Muschamp and his staff, the coaching gap is huge.

The Tigers are headed to the ACC Championship Game and a possible berth in the College Football Playoff for a fifth consecutive season, while the Gamecocks’ season is over. South Carolina head coach Will Muschamp made several moves on his staff Sunday and more are expected. He has to hold onto the headliners in his recruiting class and convince several other players to stick around. For the sake of the rivalry, I hope he gets it turned around.

Saturday was subdued and it lacked the usual passion and intensity. The rivalry just isn’t the same.