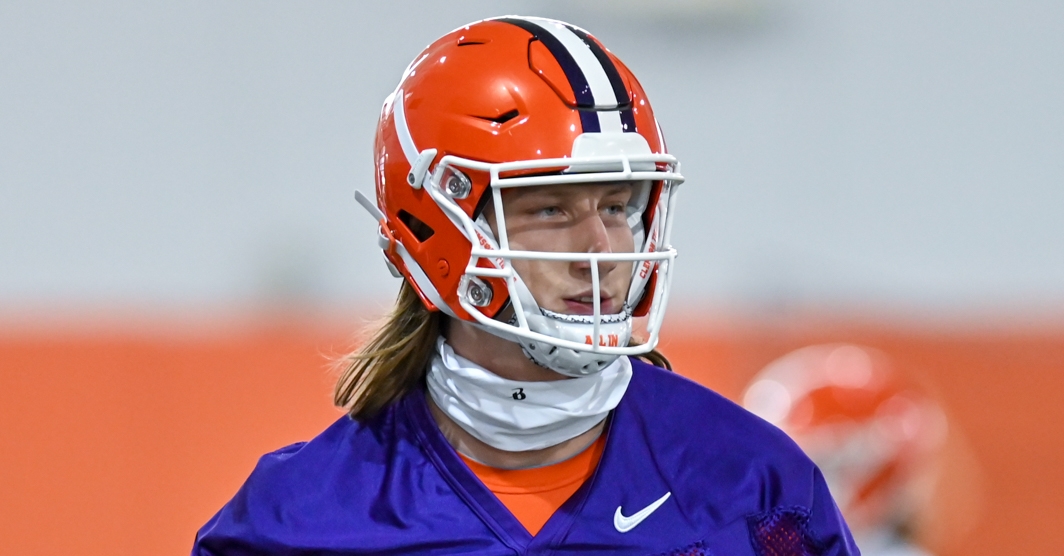 Lawrence looks for a target during Friday's practice. (Photo courtesy of CU Athletics)

Trevor Lawrence has found his voice, but even it might not be enough to save a fall football season.

Several reports emerged over the weekend that stated that Power Five athletic directors and presidents will likely pull the plug on the 2020 college football season at some point this week. It’s a blow to all of those associated with the sports, people who are looking for some sense of the normalcy we’ve lost over the last several months.

Lawrence met with the media over Zoom Friday and appeared to be at ease, more at ease than at any time since he’s been at Clemson. His maturity shows and he couldn’t hide his excitement over the possibility of playing this season, saying having football taken away during the spring was hard to take.

“Oh, yeah, it was definitely harder at first because, you realize how blessed you are. We've got this facility and everything's so easy, come in and lift, you've got your shake and your food waiting on you,” Lawrence said. “We had probably from March until May on our own, so I took about two weeks off after spring practice because we didn't get a big break after the season's end. After that, I just started working out on my own here in Clemson. Couldn't come to the facility obviously, working out here for about a month, running on my own, throwing a couple of days a week. Just find anything I can to stay in shape and to stay ready because I was hoping eventually we'd be able to come back. So it worked out good. We've gotten a bunch of good workouts in so it's been good.”

He was asked about the demands of college football players across the country and said he supported other players using their voice to foster change. He then said he felt safe with what the ACC and Clemson had in place as far as safety.

"Some of the good stuff they (other conference players) brought to light is the safety things for COVID and we've had talks with coaches and we felt safe and feel like there are good protocols in place," Lawrence said. "As far as medical coverage is something were to happen, we feel safe now...Things that were already in place for our team that we just had to make sure...(They were like) let's just all make sure we're covered and safe in case something happens because we're risking our health by playing but we're all assuming the risk, but it's our choice and we just wanted to make sure we were covered and safe. We're in good hands."

As the news about a possible cancellation of the fall season began to filter through Saturday and Sunday, Lawrence once again used his voice, this time to plead for the chance to play the season. He was at the forefront of the #WeWantToPlay movement that was trending across Twitter Sunday. Once Lawrence tweeted the hashtag, players across the country picked it up and began to tweet it as well. Just another example of Lawrence finding his voice.

As of early Monday morning, there were over 76,000 tweets with the hashtag.

"Let's work together to create a situation where we can play the game that all of us love. Not divide and argue. There is a way forward," he posted. "People are at just as much, if not more risk, if we don't play. Players will all be sent home to their own communities where social distancing is highly unlikely, and medical care and expenses will be placed on the families if they were to contract COVID-19. Not to mention the players coming from situations that are not good for them/their future and having to go back to that. Football is a safe haven for so many people.

It's obvious that Clemson’s offensive leader and emerging team leader has found his voice. The big question now is have we seen the last of Lawrence in a Clemson uniform? He hinted Friday that he has another year of eligibility past this one, but the obvious answer is that the riches and lure of the NFL would be too much to pass up. If he’s played his last game as a Tiger, he will use voice elsewhere.