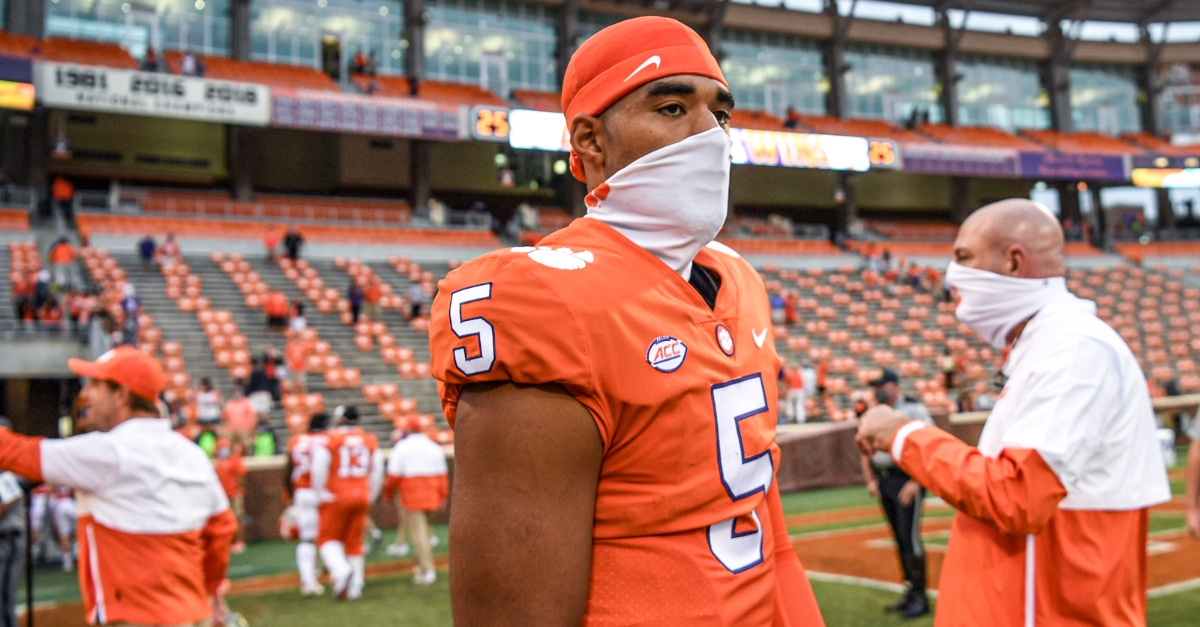 DJ Uiagalelei is earning plenty of playing time early in the season (Photo per ACC).

The age of COVID is changing the way many college head coaches go about their business, and a lot of them are finding out or will find out that Clemson head coach Dabo Swinney’s is the best way.

Swinney played 96 players last Saturday, the third-highest total in Clemson history – the record is the 111 played against Charlotte last season.

Clemson played an average of 72.5 players per game in the National Championship season of 2018, the most of any team in the AP Top 25. No other College Football Playoff participant averaged more than 56 players per game (Alabama, 55.7; Notre Dame, 54.4; Oklahoma, 52.4).

Of course, many fans want high scores and bragging rights (which go over great on social media but not in the real world) and they want their favorite player to pad his stats for a run at postseason award glory. Of course, those same fans who are complaining about that would be the first to want to burn Swinney in effigy if a star like Trevor Lawrence suffered a serious injury with the Tigers up 49-0.

"It was 49-0 and it was pretty much over. There is no need in embarrassing somebody," Swinney said. "We want to develop our team. I could keep Trevor out there and he could run up all kinds of stats but the game was under control. If Trevor Lawrence gets hurt and it’s 49-0 then the questions are, ‘Why would you keep your quarterback in there 49-0?’ I have been doing this long enough and I need to live for another day. I saw all out of Trevor I needed to see."

In the age of COVID – as teams struggle with trying to field a full roster on game day – building depth is more important than ever.

Notre Dame announced Tuesday that its Saturday game against Wake Forest has been postponed. Notre Dame had seven players with positive tests on Monday and there are currently there are 13 players in isolation and 10 in quarantine. That has been a familiar refrain this season.

Virginia Tech and head coach Justin Fuente know that all too well. Fuente said this week that he hopes to have enough players to play this Saturday’s opener against NC State.

The Hokies were originally scheduled to open the 2020 season against the Liberty Flames, but that game was moved to the back-end of the schedule once the ACC announced they were reconfiguring the 2020 season to include ten in-conference games due to the spread of coronavirus.

Virginia Tech was then scheduled to open the season at home against North Carolina State on September 12, but an outbreak in the Wolfpack athletic department left them unable to field a team, opting to postpone the season opener. However, the Hokies were dealing with plenty of positive cases on their own and might have had to postpone anyway, but NC State made the first move.

The Hokies then thought they were opening the season in Lane Stadium against in-state rival Virginia, but that contest was also postponed, this time by the Hokies after another coronavirus outbreak rumbled through the program.

Following Florida State’s season opening loss to Georgia Tech, head coach Mike Norvell tested positive for the coronavirus and will be quarantined for at least ten days. Memphis had to pause all football operations earlier this month following their season opening victory over Arkansas State when several of their players reportedly took part in a post-game party bus that resulted in an outbreak and caused them to postpone their week two contest against Houston.

Back in the ACC, Charlotte was set to face UNC but the 49ers were forced to cancel the contest due to a limited number of offensive linemen that would be eligible to play due to contact tracing.

In other words, everybody had better be ready to play when Saturday comes. And for those worried about numbers, the number that everyone needs to worry about this season is 53, which conferences have targeted as a minimum. The ACC has also narrowed in on some similar targets for personnel -- identifying seven offensive linemen as its key requirement -- in order to play but also considerations for the postponement and cancellation of the season.

Dabo Swinney looks like the smartest coach in the country right now.