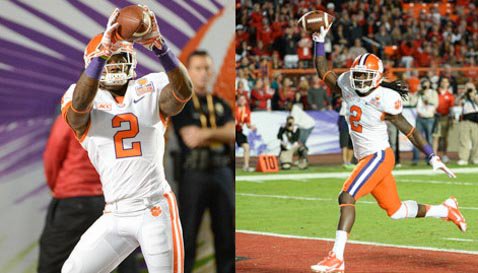 Could the beloved orange pants be back for big games?

The Clemson football team walked out for pregame warm-ups prior to the Orange Bowl Friday night decked out in their traditional road all-white uniforms. The Tigers were the designated visitors for the game, and the all-white road uniforms are a staple.

However, when the Clemson players went back into the locker room for a final time after pregame warm-ups were completed, they found a surprise hanging in their lockers – orange pants.

It was the perfect moment for the switcharoo, and when the Tigers ran back out onto the field prior to kickoff, a throaty roar went up from the Tiger faithful in attendance who noticed the uniform switch. The Tigers then went on to rally and defeat Ohio St. 40-35, capturing the school’s first Orange Bowl since 1982 and winning a BCS game for the first time in program history.

I talked to several players after the game, and they all said it was Clemson head coach Dabo Swinney

One player told me that Swinney told the team that back in the day the orange pants were reserved only for the biggest of the big games, and that this one qualified as a big game. He then told them “put on them orange britches” and “let’s put some magic on” and go beat the Buckeyes. The locker room exploded in cheers, and the Tigers went out and did exactly that.

Of course, the orange pants made their debut on Nov. 22, 1980, a home game against South Carolina. The Tigers entered that game with a 5-5 record, having lost the prior week at Maryland by a score of 34-7. The Tigers had lost four of their last five games, while the Gamecocks were 8-2 with losses to just Southern Cal and Georgia.

Danny Ford
Former Head Coach
View Full Profile knew he needed to find a spark for his team, so he took a page out of Bear Bryant’s book – Ford played for Bryant at Alabama and Bryant would let the Bama players wear crimson pants on occasion.

The tactic worked, and the rest is history.

The Tigers warmed up in the traditional white pants, but the players knew the orange pants were waiting for them in the locker room, and when the team showed up at the top of the hill in all orange, Death Valley exploded and the Tigers went on to upset South Carolina by a score of 27-6.

The orange pants were brought out occasionally after that, but Ford wouldn’t let the pants be worn for just any game. In fact, the Clemson players wanted to break out the orange pants prior to the 1983 game against 11th-ranked Georgia, but Ford said no. The Tigers had lost at Boston College the previous week in what would be Clemson’s only loss of the season, and Ford said the pants would only be worn once Clemson started “playing like Clemson” again. The Tigers and Bulldogs tied at 16-16 that day, and Clemson went on to win their final eight games of the season.

Nope, if the Tigers have played like the Clemson teams of old, they need to be saved for next year’s home game against South Carolina.