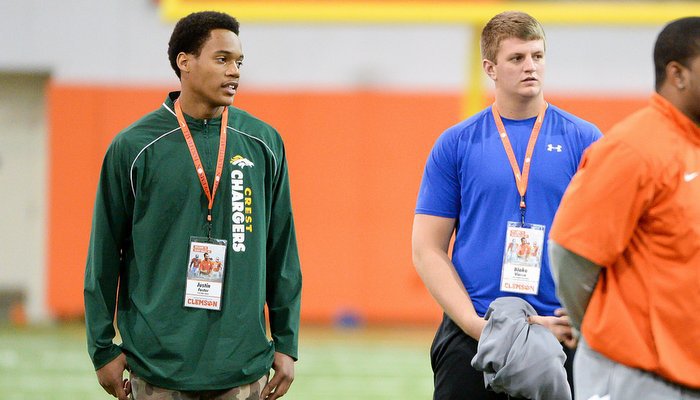 Vinson (R) was on hand for one of Clemson's spring practices

Clemson’s coaching staff continues to add to a talented stable of young offensive linemen and work has already started on the 2017 recruiting class. That continued with an offer to 3-star offensive tackle Blake Vinson

Vinson’s offer sheet has started to fill up in the last week – he added Miami (FL), Florida, N.C. State and Vanderbilt before the Clemson coaches dropped by his school with an offer of their own.

“Coach (Robbie) Caldwell and Coach (Jeff) Scott were at my school today, and they told my coaches that I had an offer. They liked my film,” Vinson told TigerNet. “I watched a bowl practice when they were down here and then I went up and watched one of the spring practices. They told him that was part of the process and why they had interest in me and they were really looking forward to recruiting me.”

A Clemson offer was one he was looking forward to receiving.

“It means a lot. They are definitely one of my top schools that I've had since the beginning,” Vinson said. “I really wanted a Clemson offer, especially after going to Clemson and seeing the campus and everything and what all they are doing with their new facilities, they are going to do some special things there. It is great to think I could be a part of that with what they are getting ready to do. It's crazy getting these offers like this. Vanderbilt was my first big-time offer and it has really picked up in the last week. It's kind of cool knowing that you are good enough to play at an elite level like that.”

“One of my friends that I have known for a really long time and is a trainer with me on my offensive line stuff played for Coach Caldwell at Vanderbilt for four years at right tackle,” Vinson said. “His name is Brian Stamper, and he also works with Parker. I am great friends with Parker - I am from West Orange in Orlando and we have played on the same teams since we were like four. I have only been at Ocala for one year.”

“I want to come up to a camp and see how Coach Caldwell coaches and everything. I want to get to know all of the coaches better so I will be at their camp in June, whichever one they want me to go to,” he said. “I like Coach Caldwell a lot. I like the way he coaches from what I saw at the bowl practice and spring practice. He is an up tempo guy who really concentrates on technique and form and works on developing the player as an all-around athlete and person rather than just a football player. He is really big on fundamentals and doing things the right way.”

Vinson said the Tigers are firmly in the mix for his services.

“My top three are going to be Clemson, Georgia and Florida and Clemson is really in the top two right now,” he said. “I just have to see which one I like the best.”