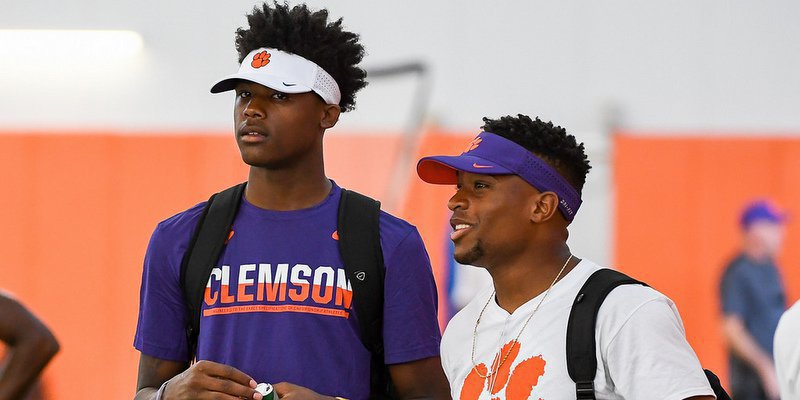 Higgins (left) and Rodgers will begin camp this week

SUNSET – Clemson fans have been excited about freshman receivers Amari Rodgers and Tee Higgins since the talented Volunteer State duo each made their Clemson commitment, and they’ll make their Clemson debut this week when fall practice starts Thursday.

Co-offensive coordinator and wide receivers coach Jeff Scott coached both receivers at head coach Dabo Swinney’s camp in June of 2016, and he’s also ready to see what the two can do.

“The early reports have been very good and we're obviously excited about getting out there with them and getting on the grass,” Scott said. “You know, you recruit these guys for two or three years, and then you have to wait until August before you can really get on the field with them for the first time.

“As a coach, there’s nothing more exciting than getting that next group of guys coming in and being able to get out there with them for the first couple weeks. See exactly how they responds, how quickly they can pick things up and learn. But I think both of those guys are going to be fun guys to watch.”

The Tigers are deep at receiver, however. Deon Cain, Hunter Renfrow and Ray-Ray McCloud are expected to be the starters, redshirt freshman T.J. Chase is expected to contribute and veterans like Trevion Thompson, Diondre Overton and Cornell Powell are all expected to be a part of the rotation.

Can Rodgers and Higgins be expected to see time in the season’s first two games?

Higgins (left) and Rodgers will begin camp this week "

“I really do (think they can be ready to help the Tigers in the first two games), it’s hard to guess,” Scott said. “I can remember about five years ago; Sammy Watkins was coming in… Sammy was coming in and my dad (Brad Scott) and I were having a conversation about this time of year–right around the media time. Kind of talking about, when do you think Sammy will be ready?

“My prediction, of course I hadn’t worked with him at all, just listening and watching him in high school, I said, ‘Right about game three, game four, Auburn, Florida State–that’ll probably be the time he’ll be ready.’ Then right after the first practice, I went to my dad and said, ‘He’s ready.’ We had been out there in shorts for one day–that’s the extreme. We’ve had some really talented guys and I did a whole lot in that one practice right there.”

With seven veterans ready to play, the talented youngsters don’t have to play.

“The good news for both Tee and Amari is that they're not going to be forced to have to go out there,” Scott said. “There are some years where these talented guys are coming in and they really had to play early. They had to learn by fire, and I don’t think that Tee or Amari will have to be in that situation. If they show enough during fall camp, and they’re ready then we’ve definitely shown in the past that we’re going to play freshmen and give those guys opportunities.

“Then how they do early depends on how much more opportunity they get through those next few games early in the year. Obviously, it’s very early to predict that, but I’m very optimistic that both of those will have an opportunity to help us this fall.”