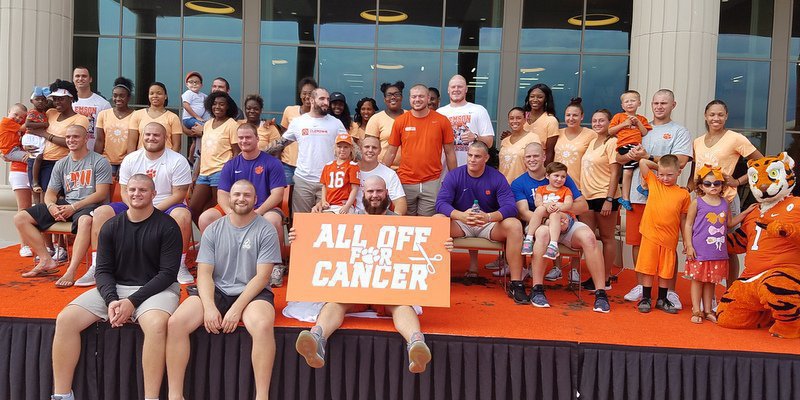 CLEMSON - Sean Pollard left the children's hospital in Greenville a few months, and spent the entire drive back to Clemson in tears, knowing that his life would never be the same. Once you touch the life of a child battling an illness, and they touch your life, it's hard to look at life the same way.

As the miles clicked off the odometer, and the tears streamed down his face, Pollard begged God to show him a way to further impact the lives of those children and their parents. Something that went beyond sitting in the floor and playing, something that would make a lasting difference.

However, it's hard for any college student - much less one that is expected to start on the offensive line for the defending national champs - to put the kind of time into such an endeavor. Pollard found a way, and the idea to offer to shave his head in an effort to raise money for pediatric cancer research was born, leading to Thursday's All Off for Cancer head shaving event at the new football operations center that the players call The Plex.

The idea and the calling for more was born on the drive from Greenville to Clemson after a day spent with Clement’s Kindness in the pediatric unit at the Greenville Hosptial.

“I called Jessie Carroll (Football Player Relations Coordinator) and I told her that I love working with little kids and I love when the team goes out and does big service projects, but I like the one-on-one and when you walk into a hospital and a kid knows who you are. That's what drove me to go to Greenville Hospital. I went there on a Wednesday and met with Sandra and spent the day hanging out with the little children.” 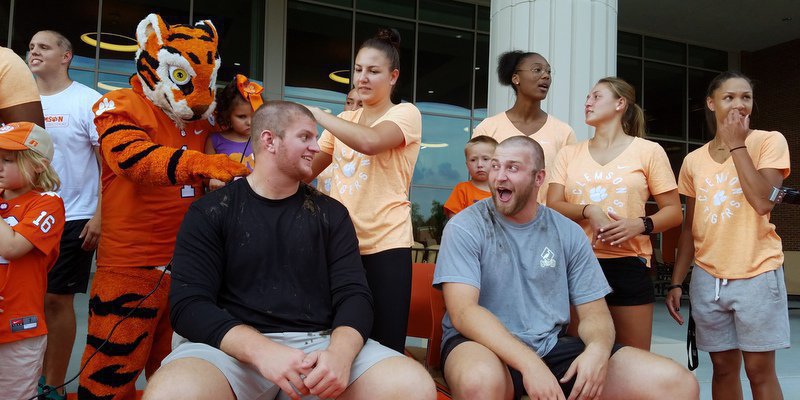 “I realized that you can still put a smile on their face. I realized that I can be in the middle of fall camp complaining that it's too hot or too sore, but these little kids are in the middle of getting treatment and having to decide where to have the needle put. It definitely changes your perspective. When I left I couldn't' stop crying for 50 minutes. I wear my heart on my sleeve and I always have, but just realizing that I sit there and complain about little stuff and these little kids live day-by-day because no one is promised anything and these kids are at a higher risk.”

From the day Clement’s Kindness board member Sandra Miller met Pollard, she knew he was a special young man and was destined to make a difference in the lives of all the children he met.

“Sean approached us when he wanted to come to the hospital and meet some of the patients and walk around, so Clement's Kindness took him there and he had a great time,” Miller told TigerNet. “He went to the inpatient unit and the clinic and really got to know the kids. He got down and played with them and really hung out with them which was awesome. We fell in love with Sean instantly because he was so energetic with the kids and excited to be there and playful with them. Sean felt like he wanted to do something else and approached us and said, 'What can we do? I'm thinking about a head shaving event.' The idea was born and here we are.

“It says a lot about him, but it should give our entire organization and our country hope. Hope that we have kids who are young and care about their communities and kids and want to make it a better place. What an amazing guy.”

While Pollard will receive the credit for the All Off for Cancer event, he said he had no choice it the matter, it was simply something he had to do. 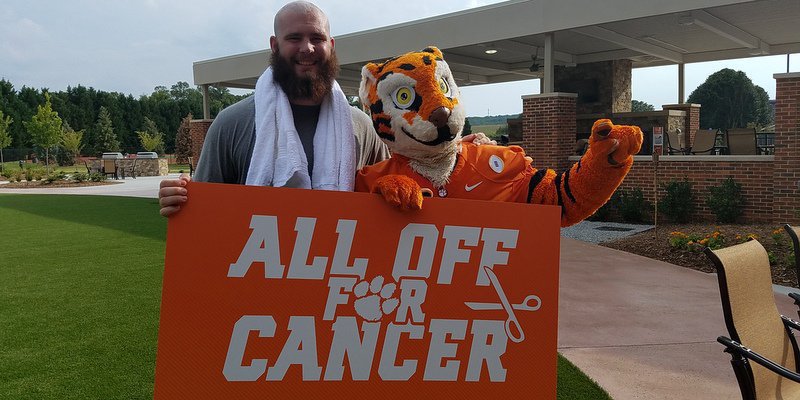 Pollard poses with the Tiger after the event

“It wasn't really my choice to do this. I prayed on it and God basically said, 'You're doing this and you have no other choice,' so that's how I decided to put my mind to it,” Pollard said. “When I called Jessie and Sandra, it just took off from there. We've been playing it for six or seven months and only raising money for two-and-a-half weeks and we're almost at $7,000 so far and our goal was $5,000.”

His plan and vision finally came to fruition when he was joined on stage by teammates, members of the women’s basketball team and the very children he sat and played with on the floor.

The children who inspired Pollard were the ones responsible for shaving his and teammates’ heads.

While Pollard had no problems going totally bald, he said it took some convincing for some of his teammates, but just as they are on Saturday afternoons, they were a team on Wednesday as their locks fell to the turf Wednesday afternoon outside of the Football Operations Complex.

“Some were harder than others, but once they realized it was for pediatric cancer and it was for a really good cause, everyone's heart takes over at that point and they realize it's just hair and it grows back. It's going to grow back at some point,” Pollard said.

This won’t be the last you hear of Pollard working to help young children or give back to his community. He’s already planning next year’s event, working on the grand finale and planning a future foundation.

“It will for sure be a three-year event by the time I leave college, but if God leads me to start my foundation fully and make it a business then that's what will happen,” he said. “As of right now, it will be three more years of doing it. We're going to set a bigger goal every year and hit. I'm not cutting my beard until I get my degree and for the big bang or the final event, it will be the beard coming off.”

More about Clement’s Kindness and how to donate

“Clement's Kindness is an upstate organization that helps families who have a child with cancer or a serious blood disorder,” Sandra Miller said. “We support families with financial assistance - mortgage payments, utility bills - when they're having a hard time because they're having to take off work to care for their child.

“These kids and their families want to be seen because they want awareness. They want people to know what they're going through, so they can raise the money and help make a difference in their lives and hopefully fund cancer research so there's no more cancer. My biggest goal is that I don't have a job. I don't want to have a job. I want to be able to hang out and just be with the kids without them having to be sick. If we can get rid of Clement's Kindness because we have no more cancer, how awesome would that be?”

Go to www.clementskindness.com (click the donate button and it will take you to the Community Foundation of Greenville's secure server). Designate ALL OFF under In Honor Of.

Donate with a check: