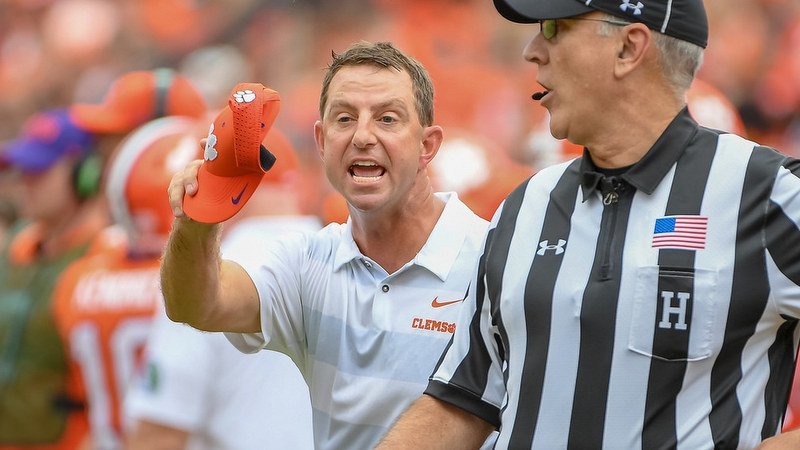 Swinney has been known to show his emotional side

Some people say that Dabo Swinney would be just as comfortable in the pulpit of a Southern Baptist Church on Sunday as he is on the sidelines of a college football game on Saturday, and that was never more evident than last fall.

Swinney has been the head coach at Clemson for 10 years – he was named the interim head coach on October 13, 2008 – and we’ve posted some of his top sound bites.

Last October, a gunman opened fire in Las Vegas on a crowd of concertgoers at the Route 91 Harvest music festival on the Las Vegas Strip. Perpetrator Stephen Paddock, 64, of Mesquite, Nevada, fired more than 1,100 rounds from his suite on the 32nd floor of the nearby Mandalay Bay hotel, killing 58 people and leaving 851 injured from gunfire and the resulting panic.

During his weekly Tuesday press conference, Swinney was asked by WYFF's Marc Dopher about the events in Las Vegas and how he addressed that topic with his team.

Swinney paused for a moment before telling those in attendance that real change starts with the individual and that he thinks Clemson has what the world is looking for.

“We talk about everything in our program. There's a lot going on in this world. Every day for us is a life-teaching moment. Every single day,” Swinney said. “The one thing I tell our guys - in my opinion, what the country wants and what a lot of people want in their life, we have right here. I see it every day. I see people that love each other. I see people that sometimes don't get along but then they put their arms around each other.

“They may disagree but they're not disagreeable. I see people who serve others. I see all kinds of different folks - backgrounds, colors. I come to work every day and I just see family. I see it. Really, that's what people want. They want love. They want respect. They want communication. They want family. That's what everybody wants, but sometimes they don't know how to articulate it. They don't know how to quite get there. They get the wrong things in their head and the next thing you know it's just a bunch of noise. Everybody is just screaming and you can't hear nothing.”

Swinney said his focus is making sure the young people in his care are equipped for life.

“I know this - what my focus is building great men right here, keeping the main thing the main thing and not getting distracted by a bunch of noise. Do what I know we're great at doing here, and that is equipping young people to go and kick butt in life,” he said. “That's how hopefully we can create great change with one simple person, one small, simple team.”

How does he go about that task?

Swinney then quoted Mahatma Gandhi in what was a first for a football press conference.

His passionate speech continued as he implored people to become change agents.

"Take it into your new locker rooms that you're going to. Take that with you and be a change agent, man. Create change. Maybe we look up down the road and we've got a governor, a president, a senator, CEOs, all of these things. Hopefully, through the little role we have here in Clemson, South Carolina, we can help bring some of what we have here and what I know we have here out into the world. I really believe that's how you change things on the outside is what you do on the inside. Everything is about what's on the inside.”