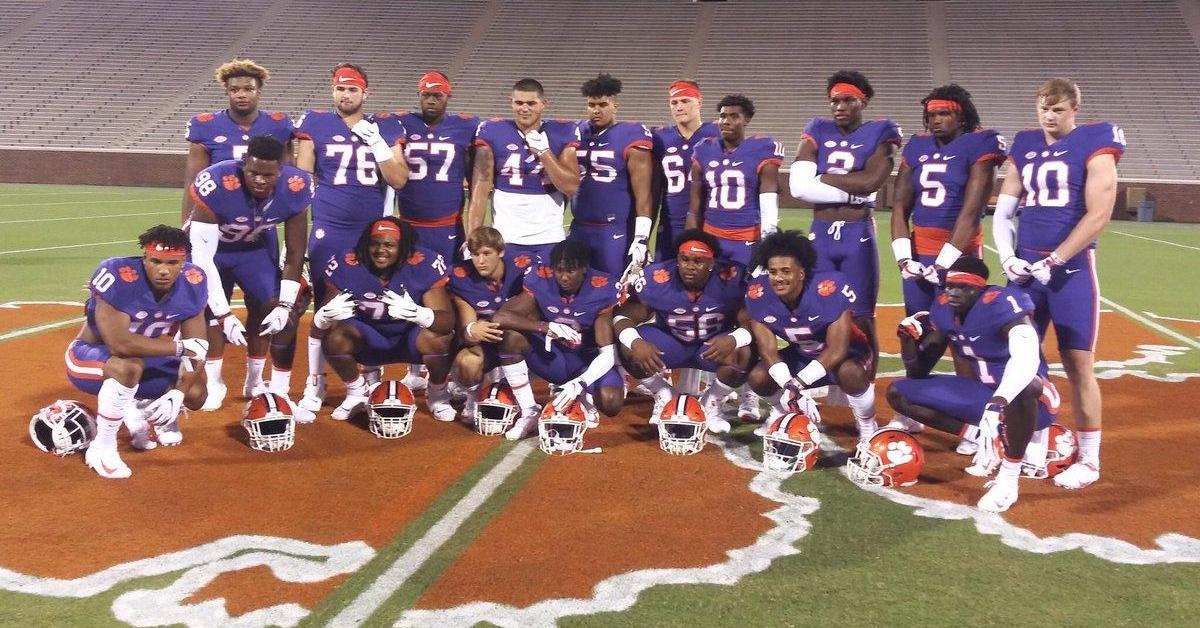 All In Cookout participants line up at midfield Friday night

Members of Clemson’s 2020 recruiting class lined up across the field in Death Valley Friday night, proudly showing off the Tigers’ purple uniforms, as head coach Dabo Swinney’s message echoed in their heads.

The message? These young cats aren’t yet the Tigers they will be, but Swinney wants them to dream big.

Offensive line commit Bryn Tucker was one of those players, and he said the proceedings – all part of Clemson’s All In Cookout – made for a big weekend.

“It was good. I enjoyed myself for sure. This is my second time coming back as a commit and it definitely feels different,” Tucker told TigerNet. “You feel like you’re a part of the team. You feel like you’re a part of them and that you’re welcome here. Coming in, my mom and dad felt like they were a part of the family, too. It just feels great. It’s a blessing to be here. Other recruits that were there - E.J. Williams, Ajou Ajou - and Ajou committed. Just talking to them, it was great. Once you’re committed and you come back for a game or you come on a recruiting visit you just feel a good vibe, so it’s amazing.”

There were several highlights for Tucker.

“We had music trivia and I’m good with my trivia, so it was pretty cool. It was the offensive linemen versus the defensive linemen,” Tucker said. “The highlight was probably taking pictures in uniform on the field. The lights were one, the scoreboard said, ‘We Too Deep 2020.’ Being out there on the field in front of the paw and taking pictures with your future teammates and future commits, it was awesome. It was an unbelievable feeling having that game day vibe. It still gave me chills. It was cool and I enjoyed it.”

“It was a great message about how he loves this class and in all his years being there he’s never had the No. 1 class. He really wants a No. 1 class,” Tucker said. “That would be a good looking thing on his resume. Having him talk to us about what we have to offer here at Clemson. He was talking about having dreams. He is big on having dreams and to dream big. There’s a picture inside the weight room of a cat and he looks inside the puddle and there’s a big old tiger. That picture says a lot. That was his message to us.”

The recruits played dodgeball and had a home run derby, with quarterback Trevor Lawrence getting involved.

“I enjoyed it very much. He’s a great quarterback and has long arms so that’s pretty unstoppable. I know one thing for sure, my man Coach Swinney, he’s pretty elite on the dodgeball,” Tucker said. “Us offensive linemen, we got eliminated in the first round because we’re so big-bodied. I got hit on my hand. He can move. The last round was the defensive linemen versus the coaches - a coach’s all-star team they called it. They were throwing out everybody left and right, I was shocked. Trevor Lawrence, he was out there throwing some balls and dunking. He can dunk with ease. It’s crazy how big of an athlete he is.”

Tucker’s lasting memory, however, will be the time spent with his future teammates.

“Coming back to Clemson since the spring game and meeting with the o-linemen, it was great. Just coming back and bonding with each other and also getting inside the ears of other players who haven’t committed yet,” he said. “It was awesome. I had a fun time and I know the other guys had fun. I didn’t really see one recruit without a smile on his face, so it was good to see that everybody was smiling, having a good time and laughing. It was amazing. Great, great people and a great atmosphere.”