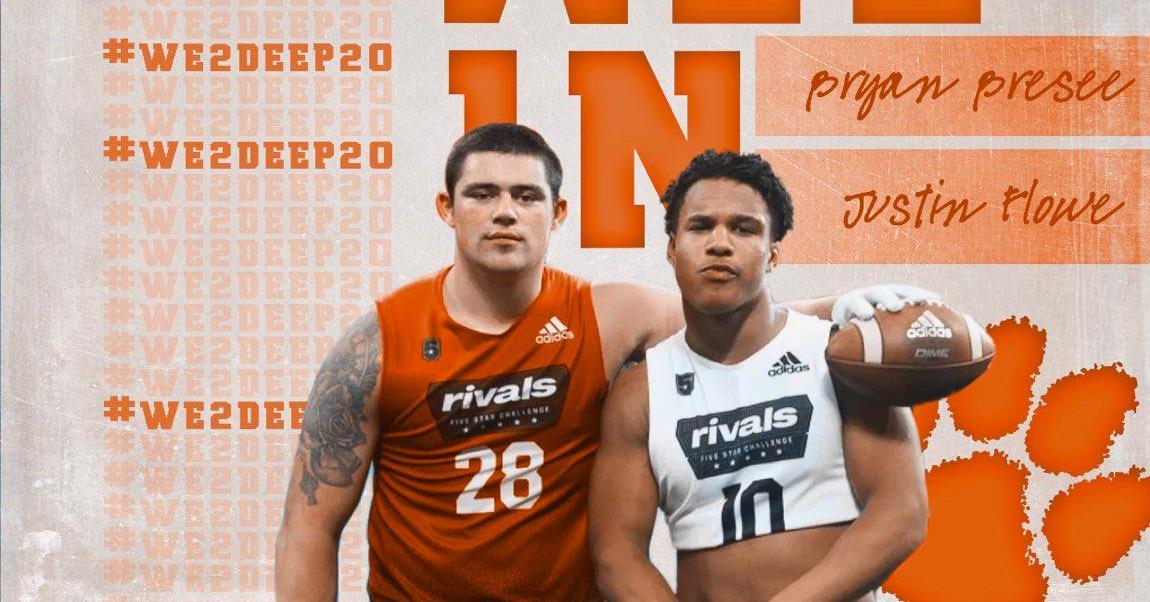 The Clemson coaching staff hosts the signature recruiting event of the late summer this weekend with the All In Cookout, and four top targets will be in attendance.

Five-star defensive lineman and current Clemson commit Bryan Bresee of Damascus (MD) will play the part of recruit and recruiter, relying on his relationships with Flowe and Burch to help out the Tigers’ chances with both players.

“I'm excited. It's always good to see everybody and be on campus and hang out with everybody, especially when we're trying to recruit some guys to join the team,” Bresee told TigerNet. “I talk to Justin and Jordan a lot. I've gotten to hang out with Justin at a bunch of these camps now and Jordan a couple of times, so we stay in contact through social media.”

Burch is considered the nation’s No. 1 overall player according to the 247 Sports’ Composite player rankings. Burch will attend the event with his mother, the family’s first time back on campus in a while.

During the interim, Burch has made several trips to the South Carolina campus and the Gamecocks appeared to have possibly taken a lead with Georgia also throwing its name in the hat. However, Burch’s family has kept his recruitment quiet, so no one really knows what’s going on or who leads.

That means getting Burch – and his mother – on campus for the Cookout is huge for Clemson’s chances.

Three current commits won't make it in this weekend - 5-star quarterback D.J. Uiagalelei, 4-star running back Kobe Pryor and 4-star defensive tackle Demonte Capehart. Uiagalelei will wait until the season for a return trip to campus as travel cross country is expensive and time consuming, while Pryor has a conflict because his high school team has a tournament this weekend. Five-star running back Demarckus Bowman has not committed to the event. All other commits are expected to make the trip.

Flowe has 42 offers but has recently become a name to know in Clemson recruiting. He will be making his first trip to Clemson since the spring when he came through while traveling with his 7-on-7 team. Georgia, Alabama, and USC (Southern Cal) are major players in his recruitment but Flowe’s relationship with Bresee and D.J. Uiagalelei makes Clemson a team to watch. Flowe’s recruitment will probably go the distance as he wants to take his official visits but this weekend’s Clemson visit could make a big impression.

“It’s big to just to get them down here and hang out with them. I think the campus kind of speaks for itself,” Bresee said. “It's always good to get them back on campus and just that they're showing interest. Coach Venables is a defensive mastermind so just adding pieces to the defense like Jordan and Justin. There are of course offensive guys but I'll leave that recruiting to D.J. Just having those guys out here and how they fit into the scheme of things and having an all-time defensive recruiting class. It's going to be good to have all of them out.”

Four-star offensive lineman Walker Parks will do his part.

“I think it will be really fun. It will be good to see a lot of guys I haven’t seen in a while,” Parks said. “There are also some guys I haven’t met. I think it should be really fun. There are guys like Jordan Burch _- I have never met him and I will talk to a couple of the other guys. I know guys like DJ and Bryan are going to be talking Justin and Jordan, but I will do what I can and then also enjoy the time with my future teammates and my family.”

Williams will make his college choice on August 24th. He was on campus for Swinney’s high school camp in June and the Tigers feel good about their chances of landing the former teammate of current players Justyn Ross and Ray Thornton.