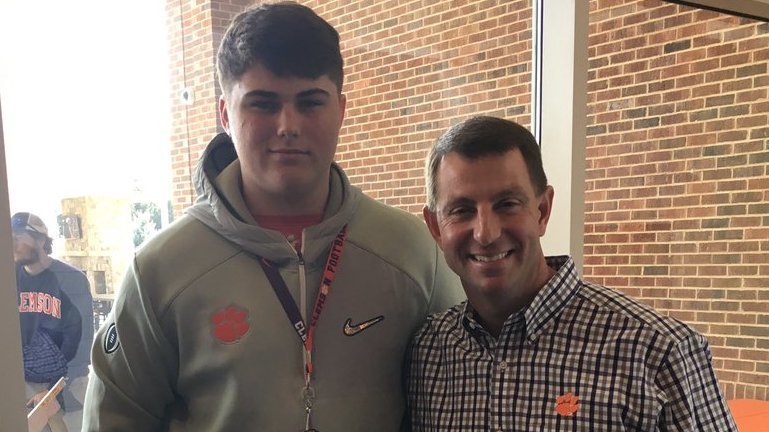 The Clemson coaching staff has been putting the full-court press on elite offensive tackle Pierce Quick out of Alabama, and Quick will visit Clemson this weekend as part of the elite junior day. Quick also happens to be committed to the University of Alabama.

Quick committed to Alabama in April of last year over offers from Arkansas, Auburn, Clemson, Georgia, Louisville, LSU, Michigan, Mississippi St., Oregon, Tennessee, and others. The 6-5, 277-pound Quick is ranked as the No. 33 prospect in the ESPN Jr. 300 and is the second-ranked prospect in the state of Alabama according to ESPN.

Despite his commitment to Alabama, Quick has kept the lines of communication open with Clemson, Oregon, Michigan, and Georgia

Clemson offered last September and Quick wanted to make another trip to the Clemson campus.

“Well, honestly, you know, Clemson offered me during this past football season,” Quick told TigerNet. “I really did like Clemson when I visited back in March at the Junior Day, and I’m just visiting the weekend to get a refresher on it. I and the coaches have built a really good bond over these past couple months. At least one Clemson coach talks to me every single day, so I’m really just going down there just to look around, and keep my good relationship with the coaches and just see how things go.”

What coaches does he hear from the most?

What is their message? Playing time.

“They tell me all the time that I’m a top priority for them, and that’s you know a blessing to hear, honestly,” Quick said. “And they just tell me I look like I’d fit in perfect at Clemson and that Clemson would just be a really good fit for me. And that I would see early playing time too.”

Quick visited Clemson last March and he was blown away by the new football operations center.

“Well, that was honestly like a month after the facility had been completely opened,” Quick said. “That facility really stood out to me and all the resources they have in there, I mean, it just really stood out.”

This time around, Quick would like some quality time with head coach Dabo Swinney.

Clemson recently lost to Alabama in the Sugar Bowl, and Quick and his family made the trip to New Orleans to see the game.

“That was a great game, you know, I went into that game honestly not really knowing who was gonna win,” he said. “I was just there watching it, and I thought it was a really good game, and Alabama surprised me, that’s the best they’ve played all season if you ask me.”