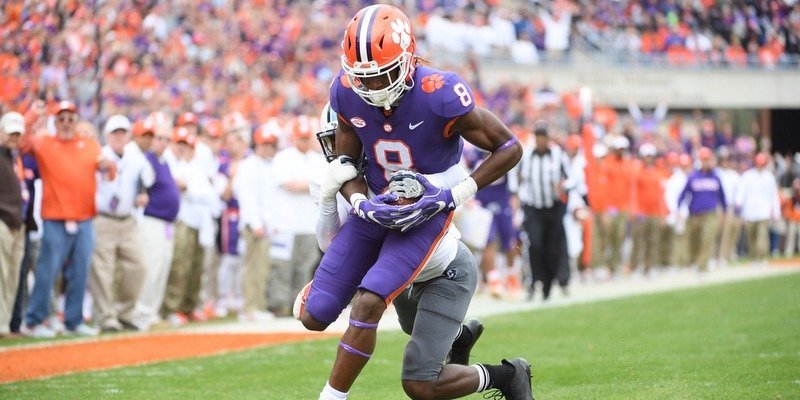 Facing an overmatched team from The Citadel Saturday afternoon, Clemson’s coaching staff could have easily followed the game plans of previous weeks and worked on the running game. Instead, with a trip to South Carolina next week and the ACC Championship against Miami in two weeks, the coaches elected to get quarterback Kelly Bryant and the Tigers’ anemic passing attack back on track.

Bryant completed 17-of-22 passes for 230 yards and three scores, while all three quarterbacks combined for 41 throws against just 26 rushes. At one point in the second quarter, Bryant had 20 passing attempts to just seven rushing attempts.

Overall, Bryant, Hunter Johnson and Zerrick Cooper combined to go 31-of-41 for 479 yards and five touchdowns.

All part of the game plan.

“We wanted to focus on improvement through all phases of the game - offense, defense and special team. That's what we feel like we did,” Bryant said. “We put together a four-quarter, complete game on both sides of the ball. That was a good showing today.”

Bryant said it was good to have success in the passing game.

“It just lets us get our confidence back, especially with some throws that we were missing earlier in the season,” he said. “To see us go out there and connect, it's good to see it all come together. Now, we're just going to keep our foot on the pedal and keep going.

Co-offensive coordinator Tony Elliott admitted the coaches wanted to get the passing attack back in rhythm.

“Kelly is our guy and the last couple of games, for whatever reason, we just haven't been connecting on the balls down the field,” Elliott said. “We're taking our shots and we've gotten a couple of pass interferences, which we count as a completion because it moves chains, but we really haven't been finishing on balls.

“It's not just Kelly, but it's good to see Deon (Cain) finish on some deep balls. It's good to keep Ray-Ray (McCloud) some opportunities and get Tee (Higgins) in there and let him stretch the field because we're going to need those plays to stretch the field if we want to accomplish our goals.”

Co-offensive coordinator Jeff Scott said the plan was to get better before this final stretch run.

“I think after 10 games you study yourself and we've thrown the ball down the field early in the year really well,” Scott said. “We don't beat Virginia Tech and a few of those games without throwing the ball down the field, but the last few games we just didn't have the timing and execution that we wanted. Really, we looked at this week as it's all about ourselves and really improving ourselves for this final stretch of games that we're going to have. One of those areas was working on the timing down the field. It really wasn't defensively set up for that. They played a lot of soft coverage, but we really wanted to challenge our guys to see if we could do it and we got off to a really good start. It looked like what we're used to out here.”