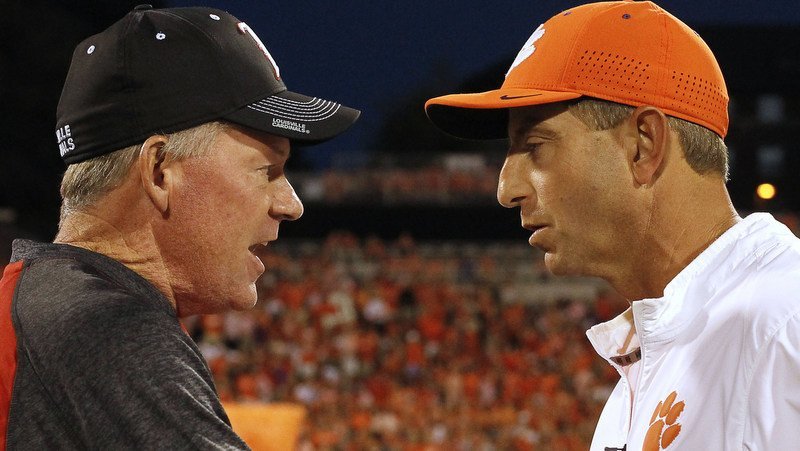 Bobby Petrino and Dabo Swinney shake hands before the 2016 game

Not many football programs get to face the No. 1 and No. 2 football teams in the same, but Louisville will make that a reality when the Cardinals play at Clemson this Saturday. This week, the Cardinals hope it's still a competitive game in the fourth quarter.

After opening up the 2018 season versus No. 1 Alabama in September, the Cardinals make the trip to take on ACC foe Clemson " to face No. 2 Clemson Saturday in a nationally televised game on ABC. It's the first time since the 2016 season that the Cardinals will play two top-5 teams when the Cardinals defeated No. 2 Florida State and lost to Clemson.

"We play a really good football team this Saturday," head coach Bobby Petrino said during his weekly press conference. “They're as good of a defense as there is out there. Their defensive front, linebackers are big and physical and fast."

"Offensively, their quarterback is doing a really nice job for them. They've had some games where they've relied on the run, and their offensive line was blocking the front. Their running backs are fast. And then, last week, they came out and threw the ball. Trevor Lawrence can really zip it. He can spin the ball. He's got a really good wrist and can get the ball down the field to his targets, so it's a great challenge for us."

The Tigers and Cardinals have played some memorable games in the short life of the series, which started when Louisville joined the ACC in 2013.

In 2016, No. 3 Louisville visited the No. 5 Tigers in Death Valley on Oct. 1 after an ESPN GameDay appearance. The game was decided when Louisville receiver James Quick stepped out of bounds a yard shy of a first down on the left sideline with 33 seconds left. The Cardinals had faced a fourth-and-12, down six points. Quick appeared to go out of bounds really easily and later claimed there was no yard marker for him to see.

In 2015, Louisville came up 10 or so yards short of field goal range, down three, and Kyle Bolin threw an interception on the last play of the game. The 2014 game finished almost identically to the 2016 game - Louisville QB Will Gardner threw a pass to Quick on a fourth-and-goal from the Clemson 2, and the Tigers batted it away almost as soon as it left his hands.

The Tigers blew out the Cardinals 47-21 in Louisville last season.

This season, the Cardinals are 2-6 overall and own a five-game losing streak. That means they will face an uphill battle against the Tigers.

"Well, what you have to do is go out and practice hard," Petrino said. "Do everything you can to get in the game and try to get it into the fourth quarter. That's what you have to be able to do is try to get it into the fourth quarter. There have been games in the past that teams have gone in there and beat them, so you have to rely on the fact that we're going to just give our best effort and play as hard as we possibly can."

"Offensively, I feel like we've made some improvements," Petrino said. "We did a better job of running the football. We did a better job blocking the front to run the football, and our receivers got in good positions. Hassan and (redshirt junior running back) Trey (Smith), I thought, did a good job of breaking tackles and running with the ball. Jawon Pass delivered the ball, made good decisions. He's doing a better job of seeing defenses."

However, Wake Forest rushed for 368 yards and was able to average over eight yards per play.

"You try to get them in a better position, just like I talked about," Petrino said. "As a coaching staff, we've got to get our guys in better position, get them to work together, understand exactly what they're supposed to do. Tackle better and run full speed to the ball."