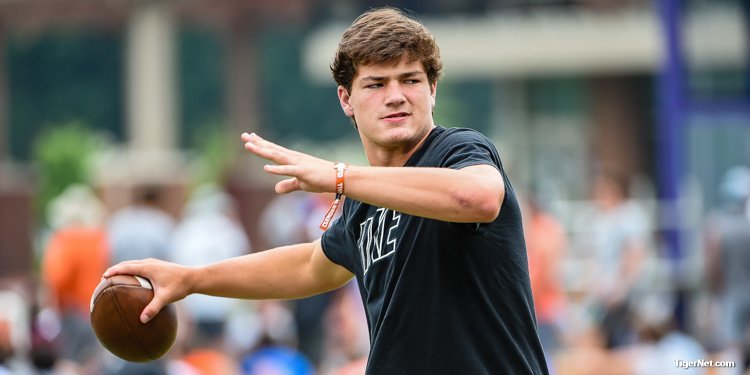 CLEMSON – A cool morning turned into a steamy afternoon, just as things began to heat up at Dabo Swinney’s high school camp.

For the first time in this camp, we spent a portion of our allotted minutes watching the quarterbacks as Charlotte (NC) Myers Park’s 2021 prospect Drake Maye and Alpharetta (GA) Denmark 2021 prospect Aaron McLaughlin threw for the coaches.

Both quarterbacks showed big arms and showed why they have multiple Power Five offers. Maye is, of course, the son of former UNC quarterback Mark Maye and the younger brother of Tar Heel basketball star Luke Maye. Mark Maye has known Clemson tight end’s coach Danny Pearman since childhood and spent time talking with this old friend as camp got underway.

Drake has a smooth motion, and he’s accurate to most points on the football field. You would think he’s a lean to UNC considering the legacy, but you never know what can happen in recruiting.

McLaughlin is another big quarterback with incredible arm talent. He has offers from coast to coast – from Southern Cal to Texas A&M to Michigan to Florida St. The Clemson coaching staff is beginning to dial in on the 2021 class, and it will be interesting to see if one or the other receives an offer.

The defensive backs group was fun to watch. Georgia commit and McDonough (GA) Eagles Landing star Justin Robinson worked out at safety, while Lawrenceville (GA) Central Gwinnett 2021 athlete Daejon Reynolds also got a look at defensive back after spending the morning at with Jeff Scott and the receivers.

With Pearman in the tight ends group was 2021 Hartwell (GA) Hart County’s Cane Berrong, the number one tight end for the 2021 recruiting cycle. He worked out with the group Pearman has studied this week – Diego LaMonica, Trey Boll, and Nick Elksnis.

It’s easy to see why Berrong is so highly regarded.

Four Louisiana prospects were on hand for the afternoon session. One of those is Eric Randall, Jr., the son of former Southern quarterback Eric Randall and nephew of former LSU quarterback Marcus Randall. Also on hand were 2022 wide receiver prospect Shazz Preston, Jr., who is being recruited to Arkansas by former Clemson assistant Justin Stepp, 2020 athlete Shamar Smith, and linebacker Kaleb Edwards.

*Clemson offensive lineman Jackson Carman looks the best right now than he has at any time since he’s been at Clemson. He was helping coach the offensive line and he was fairly bounding from station to station. He could be in for a big year.

*It never hurts to have a little fun when it gets hot, but for head coach Dabo Swinney fun means competition. He initiated a throwing competition from the 20-yard line where the objective was to hit the field goal post. He was joined by wide receivers Tee Higgins and Justyn Ross, with each contestant getting two throws. Ross won by hitting the crossbar on his second throw. Swinney and Higgins were close, with Swinney eventually hitting the crossbar after several tries. Amari Rodgers and Will Swinney each took one throw and missed. 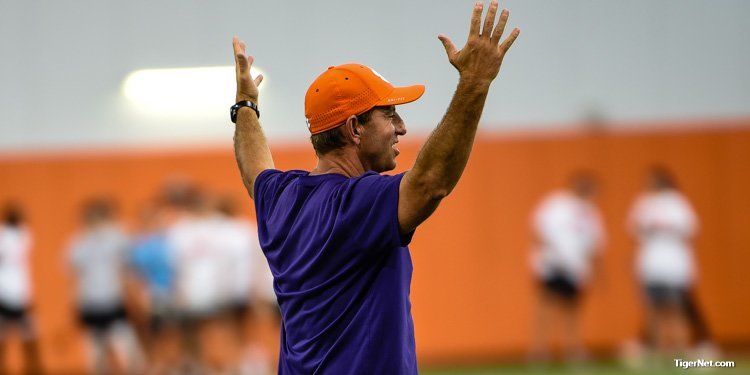 *When you visit a lot of combines and camps, you quickly realize that there are coaches that simply go through the motions of coaching. Many of the kids that come through these camps won’t receive a college offer and won’t play after high school, and they get coached that way. Not at Clemson.

Clemson grad assistant Miguel Chavis and former linebacker Corico Wright shared a portion of the field Wednesday afternoon, and you can tell that coaching is in their blood.

Wright made the most out of his abilities when was at Clemson, and you can tell by the way he pushes these younger players that he wants to the same kind of effort from them.

Chavis spent extra time coaching one prospect, and when the youngster walked away Chavis blew his whistle and said, “Do you want hard coaching, and good coaching, or do you want bad coaching?” The kid mumbled an answer and Chavis repeated the question, this time a little louder. When the kid finally gave the right answer, Chavis smiled and went to the next drill.