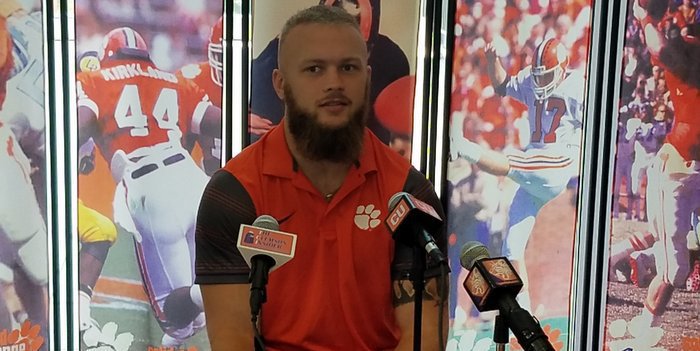 Boulware talks to the media Monday

Clemson’s senior weakside linebacker sprained an ankle against Troy nine days ago, and Swinney wouldn’t let Boulware play against the Bulldogs last weekend, even though the Anderson native says he was ready to play.

“My ankle is fine. It's bruised. I played with one arm last year. I literally couldn't move my arm at all for four games last year, so the ankle was the least of my worries,” Boulware told the media Monday. “I wanted to play. I didn't care if we were playing Daniel High School or the Dallas Cowboys, I want to get out there and play. They obviously didn't need me, but I don't care. I could've played 75 snaps and been perfectly fine. Coach Swinney is smarter than I am and looking toward the future with the short week, but I could've played. I was moving good by Wednesday.

“I thought I was going to play. I kept asking him if there was any window at all that I could go in and play. I asked him Saturday morning, and he was like, 'You're not playing.' I think he was getting annoyed because I kept asking him. I kept trying to show him that I could play. I was running around and jumping on the sidelines, and it felt perfectly fine. I was cutting by Wednesday. I think it was because it was still kind of swollen and bruised. It's still bruised, but the swelling is down. I played 163 plays in practice yesterday, and every one felt fine.”

Boulware talks to the media Monday "

Boulware was in uniform for pregame warmups and was still hoping he would be allowed to play.

“I think he (Swinney) wanted me to be out there with the guys during pregame. When I went out there for pregame I thought there was still a chance,” he said. “I felt fine. I was kind of mad that they announced at the beginning of the week that I wasn't playing. I wish I could've gone through the week to see how I felt. I think he wanted to shut that conversation down as quick as possible because we have a short week. It will be a tough game, and they'll run the ball 50 times during the game. I understand why he did it, but I still wanted to play.”

The Tigers take on Georgia Tech and Paul Johnson’s option offense Thursday night in Atlanta, and Boulware said defensive coordinator Brent Venables is working the defense at a frantic pace.

“We were in full pads for practice yesterday. The offense was in vests and shorts, but the defense and scout offense were in full pads,” Boulware said. “It was like a Tuesday practice on Sunday night. A lot of the guys weren't happy with it. I was talking to Kendall (Joseph) when we were watching film earlier about how it pays off because their scheme is so different. It's not taboo, but it's not what you see every day. The full pads definitely help. We'll be in full pads today and then tomorrow is a Thursday practice.

“It's a short week. Getting to prepare for them during camp and those extra days in camp to get a foundation definitely helped out a lot. It stresses everybody out a little bit more because we have guys who haven't played it that much, especially with our d-line. With fall camp and yesterday, they already have a good foundation for it, so I think we'll be ready to play. Coach V is frantic out there. He's crazy. We go lightning speed out there, so we get a lot of snaps in every practice.”

Boulware says he is looking forward to the matchup against the Jackets and quarterback Justin Thomas. One of the jobs of the weakside linebacker is to hit Thomas on pitch plays – no matter if he has the ball or not – and Boulware said that makes it fun to play a team like Georgia Tech.

Hitting the quarterback is just a bonus.

“Especially in practice, because when we go throughout the week, we can't even breathe on Deshaun (Watson) or he'll (Swiney) pull our scholarship. Now I get to go against these guys and treat them like they're a running back, so it's pretty fun. It's not worth it. Coach Swinney would honestly try to pull my scholarship. I would not be a part of this team if I touched Deshaun. Dorian (O'Daniel) hit Nick (Schuessler) pretty hard the other week, and he chewed Dorian's tail. If that was Deshaun, he probably wouldn't be in our uniform anymore. He'd probably have to transfer. Our gameplan as we're preparing this week, we get to hit the quarterback every single snap, so it's a lot more fun.”

On his reaction to freshman Jamie Skalski’s big hit Saturday

“I just went buck wild. He's a dog. He'll have a great career here. He's just a football player. He's old school. He has a lot of areas to grow mentally, but he just finds a way to the ball every single snap. That was probably one of the biggest hits I've ever seen in a game. He laid that dude out. I didn't know what the blitz was, and I just saw him running the line, and he disappeared and out of nowhere obliterates this dude. It was an unreal hit, so I just went crazy. I treat him like a little brother and try to guide him and bring him along. I know what his potential is going to be and how good of a player he's going to be, so I try to help him out as much as possible. When I saw that, it was a great play.

“We're similar. We're both white. We're short, white guys. I have a better beard than him. I think our style of play is very similar. His knack to find the ball is unreal.”

“He doesn't trust anyone else to do it. We'll give him a shove every now and then, but I saw they were working the scout team after practice getting them ready for that offense, so I think we'll have some guy in pads that we'll be able to hit. I've hit Coach V plenty of times, and he loves it. He gets excited about it. We could probably hit him if he's out there today.”

Not looking ahead to Louisville

“No one has talked about Louisville at all. We're all focused on Georgia Tech, and that's what has made us so successful last week. We were focused on South Carolina State. We weren't worried about Georgia Tech at all. That's why we've been so consistent because we focus on the task at hand each week, and when that game is over, we'll celebrate for a little bit, and then we move on to the next game. We're focused on Georgia Tech until Thursday night around midnight; that's when we'll focus on Louisville.”