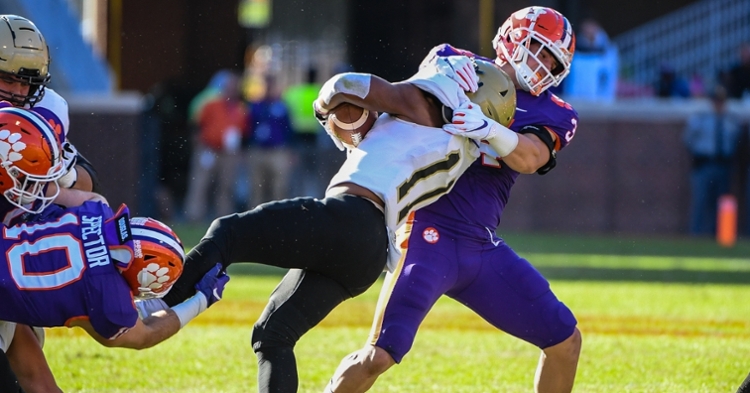 Logan Rudolph takes a Wofford ballcarrier to the ground.

CLEMSON – Brent Venables popped into the interview room following Clemson’s 59-14 victory over Wofford and didn’t want to talk about the two scoring drives allowed. It was all positive.

“Let’s just talk about the good things,” Venables said. “I am happy. There was a lot of good out there tonight.”

The Clemson defense limited Wofford to just 256 total yards and joined the 2006 LSU Tigers and 2011 Alabama Crimson Tide as the only teams since 2000 to hold opponents below 300 yards in nine straight games to open a season.

Venables was asked what he looks for when his team plays an overmatched opponent, and he said it all comes down to body language.

"Yeah, it's really...you know whether or not they're going to be ready by how they practice and how they show up to meetings, how they show up to practice,” Venables said. “Certainly, game day is a part of that, too, you know. Waking up, coming to breakfast the right way and that last meeting, you know, in the locker room. But you're doing that every week, no matter who you're playing. To me, that's how you have to do it. And we, as coaches, being very thorough in our...getting guys ready is really important, but again, I think there are challenges because you're dealing with young people."

He then told the story of when his oldest son Jake, now a Clemson linebacker, played for a team in middle school. Jake’s team didn’t look the best and was beaten before it ever took the field against a team that was dressed to win.

"Middle school, I remember my son, Jake, getting ready for a team called the Cowboys, and they had the Dallas Cowboys uniforms with the helmet, and we're some rag-tag bunch that...we're all wearing donated helmets and jerseys, and we look like a bunch of misfits,” he said. “We're playing the Cowboys, we lost before we ever got to the field. Next thing you know, he's fainting and acting like he's got a concussion, and he's out, you know, early, and we got destroyed because they lost the game, they didn't have the right mindset before we got there, so mindset is everything."

The Terriers managed a couple of long scoring plays in the second half – long after the starters were on the bench – and Venables said the younger players will learn from their mistakes.

“We've got to learn from that, some simple concepts. You've got an out-and-up and a wheel route on another one, those are really the most concerning structurally, we were not in a good position on the one option that split out the backdoor there in the boundary, those three plays,” he said. “But yeah, you learn from those, the guys that were a part of that, they knew immediately, and so we've got to help them structurally, and things like that, too."

Head coach Dabo Swinney was just happy that his team made history.

“Defensively, we also made some history. That’s nine games in a row of holding opponents to less than 300 yards,” Swinney said. “And that’s happened only twice in 20 years, and that’s incredible to do in today’s world of college football. I’m really proud of how consistent our defense has been all year long.”