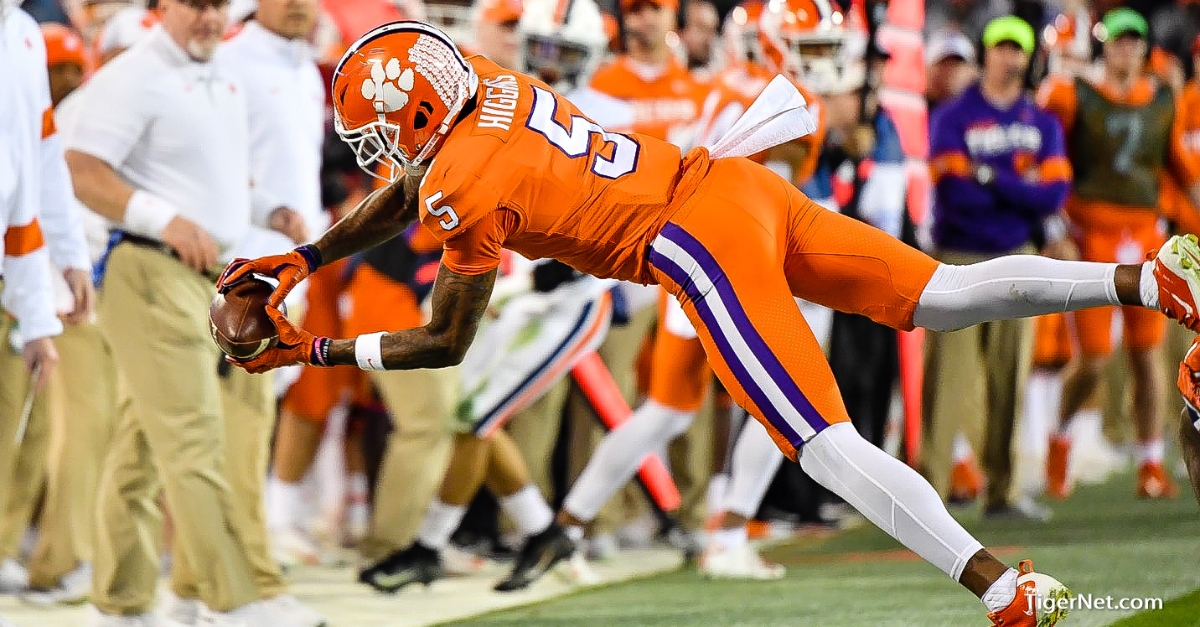 Tee Higgins makes an acrobatic catch on the sideline

CHARLOTTE, NC – Tee Higgins and Justyn Ross owned the first half of the ACC Championship Game against Virginia.

Clemson lead Virginia 31-7 at intermission and Ross and Higgins combined for 10 catches for 211 yards and three touchdowns.

PLAYER OF THE HALF: Goodness gracious, Tee Higgins. The junior wide receiver had a stellar first half last week against archrival South Carolina and picked up right where he left off. Higgins caught Clemson’s first touchdown, caught a pass that was tipped by the defender and made a circus catch on the sideline that led to another touchdown. Higgins finished the half with seven catches for 117 yards and two scores.

STAT OF THE HALF: Clemson has 349 yards in the first half. Virginia has allowed an average of 336.5 yards per GAME this season.

*Lawrence on point – Clemson quarterback Trevor Lawrence was 12-of-15 for 235 yards and three touchdowns – two to Higgins and one to Justyn Ross. Lawrence also carried the ball six times for 24 yards (four rushes for 40 yards if you take away the sacks).

*Streak continues – Nolan Turner intercepted Bryce Perkins in the endzone on Virginia’s first drive of the game. Clemson has had at least one takeaway in nine consecutive games and 17 times in the last 18 games.

*Pass defense – Clemson's pass defense was shaky early. Tanner Muse got behind a receiver on the first drive, and a lack of pressure allowed the Wahoos to throw out routes almost at will.

Without the blitz, there was also a lack of pressure on Perkins. The Tigers also had two procedure penalties.

TURNING POINT OF THE HALF: Virginia picked up a quick first down on the game’s opening drive, and a 46-yard pass put the Cavaliers at the Clemson 13-yard line. Two plays later, however, Virginia quarterback Bryce Perkins overthrew his receiver in the endzone and it was intercepted in the back of the endzone by Nolan Turner.

WHAT CLEMSON NEEDS TO DO TO WIN: Clemson is dictating the game on offense and has essentially been able to do whatever they want. Trevor Lawrence has been extremely accurate and efficient through the first quarter and Travis Etienne has brought the balance with the running game.

The defense has been a little bit of a mixed bag so far in the game. They’ve done some good things, but they aren’t consistently getting pressure on Virginia quarterback Bryce Perkins. While some of that may be scheme due to Perkins’ ability to scramble and extend plays, he’s had a lot of time to find receivers. After the first quarter, the defense seemed to settle in a bit and try to force Perkins to throw the ball.